“It’s clear that Baltimore Shakespeare Factory has fun in this show. You will too!” – Genean Hines Grobe.

Synopsis: Shakespeare’s magical story of love, jealousy, and one unforgettable night in the woods. 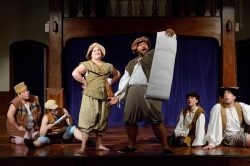 “…will delight both adults and young people alike.” – Jeannette Mulherin.

Synopsis: When her mother dies, Sara Crewe is sent from India, where she was born, to a private school in London. She is banished to the garret when news arrives of her father’s loss of fortune and his death. With a creative imagination and spirited optimism, Sara survives to become an inspiration for girls and boys everywhere.   This is a perfect show for the entire family. 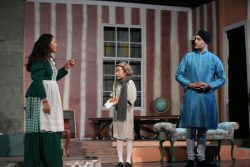 3. Junie B. Jones Is Not a Crook at Adventure Theatre MTC.

“This production is a ton of fun, for grown-ups and kids…” – Elle Marie Sullivan.

Synopsis: When Junie B. Jones, with her two bestest friends in the world, loses her new furry mittens to some “stealers,” she has to investigate. But Junie B. might have something she forgot to return, too. 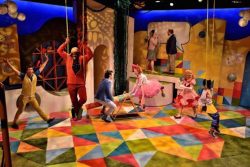 The cast of Junie B. Jones is Not a Crook. Photo by Bruce Douglas.

“…hit another one out of the park, with a particularly well-cast and creative presentation of this much-loved musical.” – Jeannette Mulherin.

Synopsis: Winner of the Tony and the Drama Desk Awards for Best Book, The 25th Annual Putnam County Spelling Bee has charmed audiences across the country with its effortless wit and humor. Featuring a fast-paced, wildly funny and touching book by Rachel Sheinkin and a truly fresh and vibrant score by William Finn, this bee is one unforgettable experience.

5. Wig Out! at Studio Theatre.

Synopsis: When Eric falls for the handsome Wilson on the subway, he doesn’t know what he’s in for. Because Wilson is also Nina, a rising drag star in The House of Light, and when a competing house calls a ball for midnight, Eric is drawn into battle. Part turf war, part pageant, all conquest, Wig Out! is a mesmerizing trip into the heart of African-American drag ball culture by way of Ovid, Jay-Z, and Destiny’s Child. From the acclaimed author of The Brother/Sister Trilogy and Choir Boy comes a dazzling spectacle about the timeless desires to be desired, find your home, and dominate anyone who throws you shade. 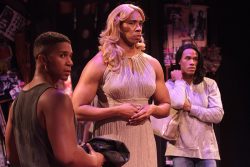