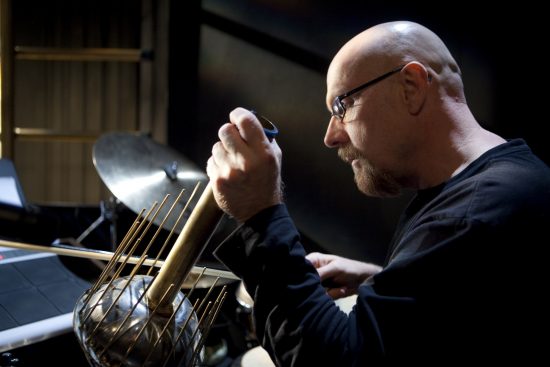 On Thursday, August 10th at 8:00 PM, The Constellation Theatre Company opened its 11th season with perhaps, quite literally, a bang as renowned world percussionist Tom Teasley performed live alongside a screening of “The Cabinet of Dr. Caligari.”

Directed by Robert Wiene and written by Hans Janowitz and Carl Mayer, the 1920 German silent film tells the story of a deranged doctor who utilizes his position of power in order to commit various atrocities throughout early 20th century Germany. As the film’s protagonist, Francis, recounts the story of Dr. Caligari to a stranger in a park, we learn of the mad doctor’s intentions, root for the truth to be uncovered, and are ultimately shocked when it is! (As with all good movies, there’s a serious twist of events that I totally did not see coming). Steeped with political undertones (i.e. Dr. Caligari representing power-hungry governmental organizations and Cesare, the hypnotized somnambulist, representing the common brainwashed man), “The Cabinet of Dr. Caligari” is heavily relevant in today’s society and is certainly recommended for all to see.

I certainly recommend Tom Teasley’s interpretation of “The Cabinet of Dr. Caligari”…

That being said, what’s a silent film without music? Enter Mr. Tom Teasley. World-renowned percussionist and composer Tom Teasley is no stranger to the Constellation Theatre Company. He’s composed the original scores for a plethora of previous Constellation productions including “The Arabian Nights,” “The Good Woman of Setzuan,” “The Oresteia,” “Temptation,” and “Crazyface” (just to name a few). Additionally, he’s the winner of countless awards and has an impressive array of international performances (Teasley has performed in various locations throughout the world including Bahrain, Saudi Arabia, The West Bank, Jerusalem, Europe, Samoa, South America, and New Zealand). Mr. Teasley’s original score to “The Cabinet of Dr. Caligari” was certainly a treat to experience. His setup in and of itself was impressive, with a vast array of hand percussion instruments, rattles, Native American flutes, electronic keyboards, samplers, and synthesizers. Also, it is of importance to note that all music was performed live without the aid of pre-recoded material or loopers, which aids in the realization of Teasley’s impeccable timing.

An aspect of Teasley’s performance that I thought was particularly creative was Teasley’s utilization of short, recognizable melodies to represent certain characters and thematic material within the film. As I was coddled and nurtured within the bosom of the late 20th and early 21st centuries, my eyes accept nothing less than 1080p HD resolution. The grainy resolution of the film certainly added to its charm, but it was difficult, at times [for these young eyes] to make out the different characters and scenes. Therefore, Tom Teasley’s musical cues certainly helped me follow the story as accurately as possible.

I certainly recommend Tom Teasley’s interpretation of “The Cabinet of Dr. Caligari” to anyone who loves classic films and live music. Any person who understands even a small facet of today’s political climate will see eerie similarities as it relates to the common man (or woman’s) perception of government in 1920 and 2017.

Running Time: Approximately one hour and thirty minutes with no intermission.

“The Cabinet of Dr. Caligari” runs through August 13, 2017, at the Constellation Theatre Company. For tickets and more information, click here.