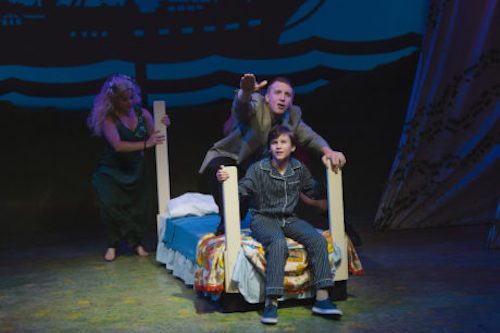 Dan Van Why (Edward Bloom) and Erik Peyton (Young Will) (with Courtney Moran as Mermaid in the background) in Big Fish. Photo by Cameron Whitman.

“Big Fish” is one of those shows whose origin feels a little bit like a game of telephone. Before it was a musical, it was a critically acclaimed movie by Tim Burton, with a screenplay by John August. Before the movie, it was a novel by Daniel Wallace. Now it’s passed through so many iterations and made a joyous landing on the Keegan stage!

Directed by Mark Rhea and Colin Smith, the plot unfolds in a series of tall tales, presumably from the past experiences of Edward Bloom a father and husband who has spent his entire life trying to teach his son Will to “be the hero” of his own story. However, because he “bends reality with a wrecking ball” he becomes estranged from his adult son just when he needs him most.

There is no moment in this ecstatic show that isn’t pure joy!

Ricky Drummond, last seen in on Keegan’s stage in their stellar production of “Parade,” plays Edward’s uptight son Will. His voice soars in “Stranger” and “This River Between Us.” Erik Peyton makes his professional theatre debut as Will’s younger incarnation and is a joy to watch. Drummond and Peyton both adeptly capture a man who is described as having “come out of the womb as a middle-aged man.”

Equally incredible is Eleanor Todd in the role of Will’s mother, Sandra Bloom. Her hauntingly gorgeous voice stays with you long after the applause has died down, especially in “Magic in the Man” and “I Don’t Need a Roof.”

The saying is that there are no small roles in theatre, but in Keegan’s production there are no small actors, and is this show especially, each member of the ensemble has their chance to shine. Katie McManus showcases her show stopping voice as The Witch, Emily Madden astounds as Edward Bloom’s spurned first girlfriend, Jenny Hill, Patrick Doneghy splits many a side as the outrageous circus ringleader Amos Cagney, and Grant Sanders tickles funny bones and tugs on heartstrings as Edward Bloom’s best friend and gentle giant Karl.

The Choreography, conceived by the incomparable Rachel Leigh Dolan, is stellar, especially in the Witches scene, where the female ensemble members inhabit the stage like acrobatic bats.

I’ve said it before and I’ll say it again, one of the highlights of every Keegan show is watching them transform their intimate space. For this production, Matthew Keenan has designed a set as malleable and enormous as imagination itself! The Lights reflect the gorgeous. Patrick Lord, the designer behind Keegan’s beautiful “American Idiot” returns with some truly innovative projections design. Deb Sevigny’s costume design is fun and imaginative from the burly, animal pelts of Karl to the sweet lavender dresses of the wedding party.

There is no moment in this ecstatic show that isn’t pure joy! Even though Edward Bloom’s stories are high fantasy, from the moment he sets the stage for the son in his bedroom, the audience is hooked. It makes you feel just for a moment that mermaids and giants and witches could be around the corner if you only have the courage to “be the hero.”