Theatre Review: ‘King Kirby’ at Off The Quill 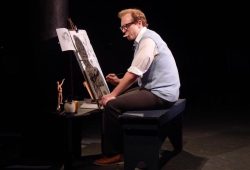 Josh Mooney as Jack Kirby in Off The Quill’s “King Kirby”. Photo by Leanne Dinverno.

Director Keith Cassidy, a comic book fan, discovered the script of “King Kirby” while browsing a bookstore in New York. He had no idea that the play existed. It was a fitting start for his Off The Quill production, running at the Greenbelt Arts Center. “King Kirby” is a hidden gem that is one of the best plays I have seen this year.

The 2014 play by Crystal Skillman and Fred Van Lente is at its core a straightforward biography of Jack Kirby, née Jacob Kurtzberg, a Jewish kid from the Lower East Side who used his native drawing talent to become the creator of some of today’s best-known superheroes. My Marvel-loving son had never heard of Kirby, and that’s due in large part to the main antagonist of the play: Stanley Lieber, who lacked Kirby’s talent for the craft but far outpaced him in self-promotion. He’s now known as Stan Lee.

“King Kirby” is a hidden gem that is one of the best plays I have seen this year.

The play also offers a basic history of the rise of comic books themselves, a medium forged by creative children of immigrants who used their own very real experiences of oppression to spin tales of massive, undefeatable heroes. Over in Cleveland, Jerry Siegel and Joe Shuster — Jews like Kirby and Lee — created a man from another world who was doing his best to pass as an everyday American, hiding his true identity. Back in New York, Kirby’s Captain America was beating up the spiritual siblings of the neighborhood toughs who called young Kurtzberg a “Christ-killer,” literally punching out Adolf Hitler in full color.

Josh Mooney is outstanding as Kirby, playing him as a man of vision who is frustrated by the limited minds of his employers and by his own inability to fully break free of the fears of his penurious past. He plays Kirby as a bottle of barely controlled rage, finding true joy only in moments of creative inspiration or when with his wife Roz (played wonderfully by Jenny Oberholtzer as both frail and tough).

Erik Harrison steals his scenes as Lee, written as a cartoon of a man. Cassidy writes in his director’s notes that the play is from Kirby’s perspective, so Lee’s villainy may be played up just a little, but Harrison fully inhabits this shameless caricature, who will be familiar to anyone who has seen Lee in his ubiquitous media appearances.

Off The Quill is a company known for movement, and an ensemble of five shifts through an array of (refreshingly race- and gender-blind) characters with balletic movement, from the floor of a cartooning sweatshop to a picket line to Alsace-Lorraine in the Second World War. (Director Cassidy is a particular stand-out as a bloviating Gen. George S. Patton.)

The production also makes effective use of projections, not just of Kirby’s art and the covers of many of his comics, but also to set the shifting scenes. One of the most effective comes during a monologue by Pvt. Kirby at war, processing how his rage in battle transforms him into a monster he cannot recognize before he returns to the self he knows. Behind him, a silhouette of a skinny man transforms into the green form of the Incredible Hulk and back.

The story of comics is the story of immigration and the American dream, and Kirby’s later struggles with Lee and the “suits” at Marvel show another side of that dream — what happens when vision collides with profits. It’s a story that will inspire and infuriate even those who have never picked up a comic book.

[Full disclosure: I have worked with Off The Quill as a performer, but not with this particular director or artistic team.]

“King Kirby” runs through August 12, 2017, at Off The Quill at Greenbelt Arts Center, 123 Centerway, Greenbelt. Click here for tickets.