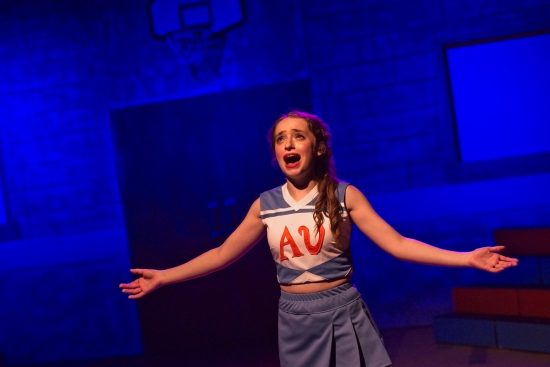 …the slam dunk, feel-good musical of the summer!

Fed-up with the Athens University basketball team’s 30 year losing streak, transfer student Lysistrata Jones convinces her fellow cheerleaders to stop “giving it up” to their woefully unskillful basketball playing boyfriends until they finally win a game.

Actress Hailey Ibberson is the spunky and quirky heartbeat of the show in the title role as Lysistrata.  Her nasally, whining voice suits the role well as she manipulates others to join in on her scheme, eventually becoming the most hated person in the school as result.  Lysistrata wants more than to just have her boyfriend’s basketball team win a game, her character looks inside to find her own dreams and aspirations as reflected in the stirring pop ballad “Where Am I Now,” performed with passion by Ibberson.

A sophomore Musical Theatre major at University of the Arts in Philadelphia, PA, actor Patrick J. Campbell plays the role of Mick, the captain of the struggling basketball team. Patrick keeps his eye on the ball with his role,  maneuvering flawlessly from portraying a macho basketball captain to letting his guard down, showing his more sensitive, poetry reading side.

Taylor Washington takes command of the stage as Hetaira, a strong woman who has come from ancient Greece to tell this modern tale.  What is more, she’s also a local madame in the story. Washington is at her best as she teaches life lessons with her own brand of motherly love and humor, including when she says to Lysistrata, “Don’t give up, just stick with it, and life is going to surprise you everytime.”

Another stand-out performer is Taylor Witt as Xander, a blogger who is “so liberal he’s held benefits for diseases that have already been cured.”  Though he isn’t on the basketball team, he is the school mascot, a Spartan.  Besides cheering on the team, he cheers and encourages Lysistrata to “Hold On.”  This snappy, feel good number is a highlight in the show because of Witt’s joyful performance.

The positive message of the play is to not accept mediocrity and to never give up.  That message and the entertaining way in which it is delivered makes “Lysistrata Jones” the slam dunk, feel-good musical of the summer!

Running Time: About two hours, with one 15-minute intermission.