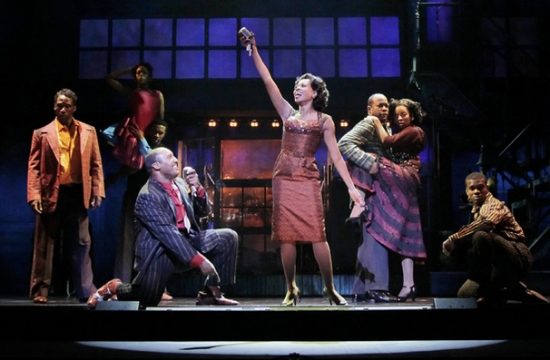 The cast of ‘Memphis.’ Phone provided by ArtsCentric.

Every time I go see something by ArtsCentric, Baltimore’s outstanding black-centric theatre company, I am impressed all over again.  And their current offering, “Memphis” is no exception. With music by David Bryan (music and lyrics) and Joe DiPietro (lyrics and book), the original was a surprise standout of the Broadway season of 2010, walking away with four Tonys, including the top prize for Best Musical.  Leave it to ArtsCentric to pick up the mantle and run with it. This production rocks the roof off the place.

Dealing with racially charged material is nothing new in musical theatre but rarely is the issue placed so front and center and presented with a raw and searing look at just how far we’ve come – and how far we’ve yet to go.  The story opens in Delray’s Bar in Memphis, circa early 1950s.  Into this all black bar wanders a – wait for it – white boy, one Huey Calhoun, as out of place as the proverbial fish out of water.  This hapless character, none too bright and apparently color-blind as well, is as smitten with the music as he is with the lead singer.  He convinces his boss at the department store where he works to let him play records in the store but gets fired because he dared to play ‘race music.’  When he returns to the bar the next night he promises the singer, Felicia, that he’ll get her on the radio and despite having no experience he manages to get a job at a radio station and proceeds to not only get Felicia on the radio but propel both of them to celebrity status in Memphis.  When their burgeoning relationship gets a little too public, Felicia pays a hefty price for Huey’s indiscretion. With a colorful supporting cast, the story reaches a predictable climax but teaches some valuable lessons along the way.

Directed with a sure, deft hand by Kevin S. McAllister, the production swings along at a breakneck pace that is at once dizzying and supremely gratifying. Scenes shift almost seamlessly. Cedric D. Lyles does his usual yeoman’s work as musical director and is on stage much of the time as the club’s and later Felicia’s pianist.  He coaches the ensemble to new heights in the vocals as well as leads the excellent ensemble of musicians.

Torens Johnson’s sizzling choreography is period perfect and Ryan Haas’ set is as ambitious as any I’ve seen on local stages and absolutely wonderfully executed. Kitt Crescenzo’s costumes, especially for Felicia, are terrific and the whole production is nicely lit by Lynn Joslin.  On the technical front, my only complaint was with the sound.  Actors are under-amplified, and there was occasional feedback from the speakers which really was a buzz-kill, but not enough to detract very much from the overall excellence.

This production rocks the roof off the place.

As I’ve come to expect from ArtsCentric, the ensemble is superb.  As the cliché goes, there are no small parts, only small actors.  On that stage, everyone was huge.  It is indeed a delight to see a company sing AND dance so well so consistently throughout a performance.  In scene after scene, the company portrays various characters with great comedic timing, great acting skills as well as killer musical theatre chops.

Kymon George Carriker is as adorable as he is talented.  As the silent Gator, he gets more mileage out of a grin than some actors do out of a Shakespeare soliloquy.  And when circumstances force him to sing out, he delivers a tenor that is a joy.  Stephen M. Deininger, fast becoming a staple both on stage and behind the scenes in Baltimore area theatres, delivers just the right notes as the radio station manager Simmons and my only regret is that I didn’t get to hear more of his lovely baritone.

Derrick Truby plays the affable janitor and all-around mensch, Bobby.  Pound for pound, this guy can match and pass all those skinny, little guys on any stage he shares.  And with a voice that can go from a low rumble to a hair raising falsetto in a single phrase, it’s a pleasure in any register.  And wow! Can he dance his behind off!

David Hammett is a smoldering, smoky-voiced tower of strength and projects his emotions with a raised eyebrow, a jut of his jaw, and body language that leaves zero doubt about his devotion to his sister and his determination to protect her from anyone meaning her harm, even if the harm is coming from her own intentions. When he sings “She’s My Sister,” he is fantastic.  Hammett has the kind of self-assured confidence that makes a good actor great and has a voice that fits the R&B groove of the score perfectly.

Jackie Rebok has the unenviable task of playing Huey’s racist mother.  But she eventually comes around and gives her grudging acceptance of her son’s relationship as something over which she has no control. The mixed-race audience gave her a wide berth but as the character comes to recognize the worth of the people she has long held in such low esteem, so did the audience come to love Rebok’s portrayal.  With a fine voice and solid acting, Ms. Rebok does wonders and it’s so special to see her bring this character to life.

Awa Sal Secka as Felicia is one of those rare actresses whose most visible trait on stage is her absolute and unabashed honesty.  Every line, every move, every emotion, every reaction, rings completely true. She is focused and in control and has the audience wrapped around her little finger from her opening number, “Underground,” to the stirring reprise of “Love Will Stand.” With a voice that can break your heart, steal your soul and stir your passions, she is every inch a star on that stage.  When she and Huey meet in his house for the first time, she is funny and warm, and her trepidation at what she knows will ultimately be a bad idea is palpable. This is a lady who has spent her entire life with her guard up and nothing short of falling in love is going to change her.  She is a true asset on any stage and I look forward to seeing her in any role.

And I don’t even know where to start with Mr. Ryan Burke.  When he first shuffles onto the stage, with that Gomer Pyle, aw shucks, look on his face, slouching around like a 50s slacker, I had no idea what kind of voice was about to come out of that mouth.  But to borrow Huey Calhoun’s favorite phrase, huckadoo!  It’s what he shouts whenever he is at a loss for words. And I’m shouting it now.  Mr. Burke is as good as anyone I’ve ever seen on a local stage.  He can act, he can sing and his chemistry with Ms. Secka is what we want to see from every love-struck couple in every musical.  He captures the vocal nuances like he was born in the bayou, he can do vocal riffs like he was raised in a black Baptist church, and his infectious smile had the audience rooting for him like we were his family, regardless of race.

Musical theatre so often does nothing more than entertain and that’s fine.  But sometimes it illuminates an issue while putting a face and voice to cultural topics we’d all be wise to pay attention to.  ArtsCentric is so much more than just another theatre company.  Go see “Memphis. “  You’ll know exactly why.