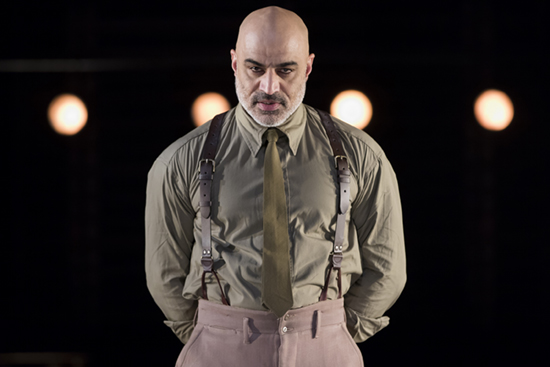 Faran Tahir as Othello in the Shakespeare Theatre Company’s production of ‘Othello.’ Photo by Scott Suchman.

“Where should Othello go?” This is one of the final questions that the titular character asks in Shakespeare’s “Othello,” and points to the work’s seminal exploration of “otherness” and the nature of belonging. The Shakespeare Theatre Company’s current production, originally staged in 2016 and returning for a short run, explores with elegant sensitivity questions of racism and religion that remain startlingly current.

The story opens in Venice, where Othello, a Moorish general, has just eloped with Desdemona, the daughter of Brabantio, a Senator. Brabantio brings the case in front of the Duke, hoping to reclaim his daughter. The Duke instead finds in Othello’s favor, not only because of the general’s past service, but also an imminent invasion of Cyprus by a Turkish force which requires Othello’s military ability. On his own wedding night, Othello leaves to command an army, finally defeating the Turkish forces. All the while, Othello’s jealous ensign, Iago, plots against him, eventually convincing Othello that his lieutenant, Cassio, and Desdemona are lovers.

Having had the pleasure of seeing the 2016 staging, I can say that Faran Tahir triumphs again as Othello. He has a commanding stage presence that makes him equally believable as a general, barking orders, or a lover, weaving a tale of enchantment. The scene in which he relates his courtship of Desdemona features his musical and mesmerizing intonation of Shakespeare’s poetry.

… explores with elegant sensitivity questions of racism and religion that remain startlingly current.

Othello finds a worthy adversary in Jay Whittaker’s Iago, one of Shakespeare’s most famous villains. The play points to a few reasons for his hatred of Othello (jealousy? infidelity with Iago’s wife? racism?), and the contrast of Whittaker’s tough-guy slouch and wise-cracking manner with the clipped vowels and starched cuffs of Cassio (a fantastic Patrick Vaill), Othello’s chosen lieutenant, also underlines potential class resentment. Able to pivot from persuasive to brutal, Iago’s scenes with the foppish dupe Roderigo (Ben Diskant, pitch perfect) are some of the most enjoyable of the show, and his dry one-liners drew consistent laughs well into the second half.

These design choices seem to suggest that the battle may be over, but the war never is, which is certainly true for Othello as he fights against jealousy, and ultimately, prejudice. As director, Ron Daniels paces the long show nicely as it dips into the tragedy of the second half, and Othello’s descent into jealousy and madness under Iago’s manipulation. Madeleine Rogers’ luminous turn as an affectionate but strong Desdemona signals the play’s shift to tragedy as she registers the young wife’s horror upon comprehending her husband’s suspicions. Tahir viscerally conveys Othello’s mental and emotional dissolution. The decision to express his increasing distance from his wife, and adopted culture, as a catalyst pushing his return to his “othered” cultural identity as a Moor, seeking solace in his faith as a Muslim, is compelling and insightful.

At the end of the play a desperate Othello asks his former friends to “Speak of me as I am,” not as a monster, or an “other,” but as a human. Given our political moment, the line resonates poignantly. The play cannot answer the question of where Othello should, or can, go, but I can recommend everyone go to see this spectacular, original production before it closes.

Running Time: 2 hours and 45 minutes with a 15 minute intermission.

“Othello” runs through Aug. 27 at the Shakespeare Theatre Company. For tickets or more information call 202-547-1122 or click here. The performances are part of the theatre company’s annual “Free For All.”