Theatre Review: ‘The Devil’s Music: The Life and Blues of Bessie Smith’ at Mosaic Theater Company of DC 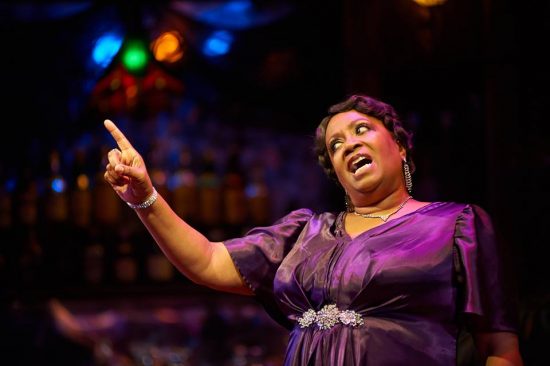 On Monday August 28th 2017, the Mosaic Theater Company of DC opened its third season with a spectacular performance of “The Devil’s Music: The Life and Blues of Bessie Smith, “ starring Miche Braden. Mosaic Theater Company’s first musical, “The Devil’s Music” provides audience members an in-depth view of the life of Bessie Smith in the most imaginative, creative, and entertaining way possible.

Bessie Smith was born in Chattanooga, Tennessee on April 15th, 1894 to Laura and William Smith. By the time Bessie was nine years old, both of her parents had died; her older sister, Viola took care of her siblings as if they were her children in her parents’ unfortunate absence. In order to earn money for herself and her family, Bessie and her older brother Andrew (he played guitar) busked on the streets of Chattanooga. And the rest, as they say, is history. Bessie’s love for performing was nurtured throughout her childhood years and, as fate would have it, she’d later be considered the “Empress of the Blues,” one of the most influential blues [and jazz] singers of the 20th century. It’s a wonder that Bessie Smith was able to accomplish all that she had considering her extremely humble beginnings in addition to the fact that she was born black in late 19th century America (census reports show that 134 persons of African descent were lynched in her birth year alone). But she did, and “The Devil’s Music: The Life and Blues of Bessie Smith” helps to shed a little light on Bessie’s compelling story.

Written by Angelo Parra, “The Devil’s Music: The Life and Blues of Bessie Smith” begins as Bessie recalls the story of why she and her band were turned away from a whites-only theatre in 1937 Memphis. The director of the theatre insisted that Bessie and her band utilize the colored entrance; after all, rules are rules. Her Response? “Rules is rules and fools is fools.” Suffice it to say that Bessie and her group opted to not perform that particular show. Bessie Smith was an unbelievably strong woman (as fiercely portrayed by Miche Braden) and refused to settle for anything less than she believed, in her heart, she deserved. As the night unfolds, Bessie recalls story after story, each one digging just a little bit deeper into who she was as a human being.

I cannot stress enough how much I loved Miche Braden in her role as Bessie Smith. An actress, singer, musician, and songwriter, Miche Braden has performed internationally as an actress and singer and has taken “The Devil’s Music” on tour in 2011 (where she was nominated for the Drama Desk award “Best Actress in a Musical”) and 2013. In addition to doing a fabulous job of performing the lead role, Miche also directed and arranged the music. The woman is talented, and hilarious to boot! Miche did an extraordinary job of tackling difficult subject matter in a way that was thought-provoking yet, light-hearted whereby the idea of white men running around in white sheets with pointed hoods and eye-holes, wreaking havoc in the lives of persons of color didn’t strike up negative emotions, discomfort, and fear, but, instead, Miche was able to point out the absurdity and ludicrousness of it all in the most hilarious way possible (which is important considering, at this very point in time, there is so much we could cry about).

Miche is supported by a three-person rhythm section consisting of Jim Hankins (bass, and the character Pickles), Anthony Nelson Jr. (saxophone) and Gerard Gibbs (piano). It’s important to note that, although the musicians do support Miche in her lead role as Bessie, they are very much an integral component of the production and should be recognized as such. “The Devil’s Music” was directed by Joe Brancato and set design was headed by Brian Prather. Pat Doherty designed the costumes and Todd Wren took care of the lighting.

“The Devil’s Music: The Life and Blues of Bessie Smith” runs through September 24, 2017 at the Atlas Performing Arts Center. For tickets and more information, click here.