‘A Quick 5’ with Josh Davis 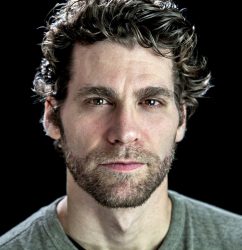 Josh Davis is playing the role of ‘Javert’ in the national tour of “Les Miserables.”  The show will be in town at the National Theatre in Washington, DC from December 20, 2017 to January 7, 2018. Recently, he played the role of the handsome new superintendant, Sid Sorokin in 5th Avenue Theatre’s production of “The Pajama Game.” He originated the roles of Snaggletooth Hoskins/Bonny Johnny Rakehell in the world premiere of “Bella: An American Tall Tale” at the Dallas Theater Center.  Josh first appeared on Broadway in “Beautiful: The Carole King Musical.”  TV/Film credits include: “Law & Order,” “As the World Turns,” “The Graduates.” Voice Over: Papa John’s; Chase Sapphire; Milk; Vizio Smart Cast; 3M; Royal Canine; Sharkweek.

To learn more about the national tour, click HERE.

You made your Broadway debut in “Beautiful: The Carole King Musical” as a member of the ensemble, Righteous Brother, and Nick in January 2014.  What thoughts and feelings did you have after your last performance in the musical in August 2016?

My first thought was – I can’t believe it went so fast. I think I relived the entire three years in just a few minutes as I took my final bow. I tried to take it all in, but I was overcome with emotion and just sorta sniffled my way through the bows. I knew I was gonna  miss the show and my role in it, but as sappy and cliche’ as it sounds it  was the people I was lucky enough to be surrounded by that I would miss the most. They were an incredibly supportive cast and crew and over the three years we had been through an awful lot together. Relationships, marriages, babies, deaths…the Tony’s. Pretty much everything you can pack into 3 years of people’s lives, it was all shared together in the Sondheim. Also Kevin Duda is one of the funniest people I have ever met. And making Doug Lyons laugh every day brought me a lot of joy.  I entered that show a virgin of Broadway with just an idea of what it meant to be an actor in that environment and I left with a much greater depth of understanding for what  it takes to thrive both on and off the stage.

Please talk about anyone who has been a mentor to you.  How did they influence your acting career?

My first mentors are and will always be my parents. They were not actors or singers nor did they ever work in the entertainment industry, but they always encouraged me to pursue my own ideas and creativity – even when they didn’t understand how or why I did what I did. I began acting and singing in highschool when I took drama with Mo Dutterer and choir with Jeffrey Gemmell. Both of them played an important role in helping me to break out of my  insecure self and open up on the stage. Mr. Dutterer taught me how to act in the simplest form. Listen, take in the stimulus and then react. That’s basically it, right? I mean there’s a lot of techniques but when it comes down to it’s core I think that is what acting is. Mr. Gemmel helped me to find my true voice, which was far bigger than my skinny little frame would have revealed. I could always sing more or less, but as far as breathing and muscle control, Jeff was incredibly knowledgeable and more importantly he could communicate his ideas and enthusiasm for music to his students. I ate it up. In my Senior year I was taking Drama II, Choir II, Madrigals and Stagecraft. I skipped lunch and just ate in class every day. And then I went to college and Majored in business. Why?

How does it feel to be cast as Javert in the national tour?

“Les Miserables” was the first big show I ever saw. Mr. Dutterer took us to see the tour when I was a freshman in high school. I just sat with my jaw open the whole time and I vividly remember watching the actor playing Javert sing stars. I was blown away. It was one of those defining moments of one’s life. Like there was before “Les Miserables” and after “Les Miserables.”  That was it. I listened to that soundtrack every day for a year. The I went to business school. What’s that about?  10 years later I was performing that role  at Pioneer Theatre in Salt Lake City, Utah. But I was an understudy and the guy playing Javert had called out so I stood there on stage belting out Stars. It was crazy.  And what was even more crazy was the actor I had seen in the national Tour back  in High School was Merwin Ford. And the actor I was understudying was Merwin Ford. I told Merwin that and he was like, “cool,” and I was like, “yeah…” And then it was just awkward. But it was still cool. So… yeah.

I’ve played Javert twice since then and having this opportunity to take on this role in the North American Tour is beyond humbling. I’m incredibly grateful and excited with a tinge of terror. 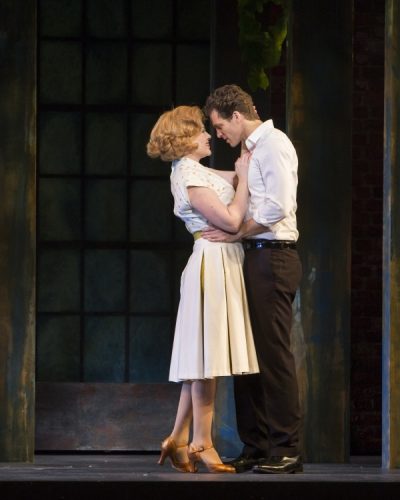 Billie Wildrick and Josh Davis in “The Pajama Game.” Photo by Tracy Martin and Mark Kitaoka.

Please talk about some of the behind-the-scenes preparation and logistics that are involved in a national tour.

That’s pretty much what it has been at least this last week. Amazing it hadn’t really occured to me that I would be leaving town for a year until last week. I mean I knew I was going, but did I really understand what that meant? Id say that was a solid “no.”

I’m making a lot of lists. List of what’s going, what’s staying, what bills need to be paid, what clothes need to be taken, how am I gonna fit my Vitamix, Air Purifier, Humidifier, 3-in-1 Steamer Slow-Cooker all in my trunk?

I did one tour when I first started acting professionally, but it was nothing compared to the magnitude of this. That was 6 actors driving around the country in a van. This is like 50 plus people and a huge set and lots of wigs and costumes. It a pretty incredible production to watch and I don’t mean the show itself. The organization of all the parts is astounding.

As for rehearsal – I was very familiar with the track having played it before, but there are always elements that you discover whenever you are replaying a role. Especially notes. “Oh, that’s the note? I’d been singing that wrong this entire time, well wha’do ya know.” There was a lot of that.

As far as I understand it they provide us with housing and we have the option of taking that, which is usually a hotel of some sort, or we can find our own housing. I’ll be staying in hotels until we get to Chicago and then me and a few of the cast got an Airbnb right downtown. Hoping that is fun.

When not performing on stage what do I like to do? Well I have dog and a lot of my time is spent taking him for walks and cleaning up pieces of furniture that he has “taken apart”. No it’s been a joy to have a dog. A very real learning experience – for both of us. I practice callisthenics pretty much every day. I quit my gym a few months ago and just do bodyweight exercises and it’s been great. I also got into urban sketching with pen and ink and water colors. I’m also writing a  TV based on a novel and will be producing that about a year or so from now. So I keep busy.

Book Recommendations – Ready Player One. Read it before the movie comes out! Podcasts i’m listening include: Hardcore History and Planet Money and Reply All. good stuff. Music I’m listening to: Anything by Odesza and re-exploring Tom Waits.

Thanks for taking the time to learn more about me.