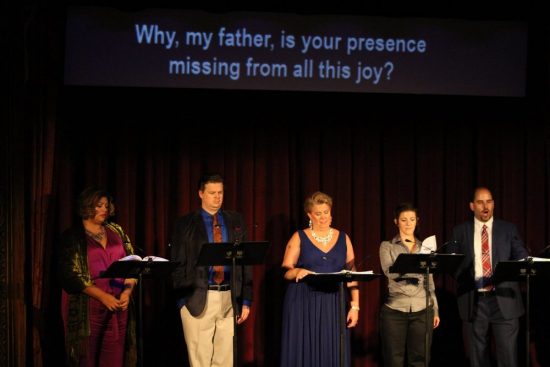 I entered the Engineers Club of Baltimore, MD in Awe! An absolutely beautiful venue with rich deep wood walls and an elaborate floor to ceiling wood staircase in the lobby. The Baltimore Concert Opera celebrates their 9th season as Artist in Residence at the Engineers Club, one of the most elegant and intimate concert halls. A setting that begins with a unique experience at the opera.

Gioachino Rossini’s  opera, “Guillaume Tell”  is the story of the legendary Swiss hero William Tell set in Switzerland during the Thirteenth Century. There are four acts based on the play by Friedrich Schiller. The world premiere was on August 3, 1829.

The conflict between Tell’s Swiss Rebels and their Australian oppressors is an epic of romance and revenge.  The murder of Arnold’s father, Melcthal ignites revenge against the torrid Austrailan Governor Gesler (Justin Hopkins), but Arnold (Matthew Vickers) and Gesler’s daughter, Mathilde (Caroline Worra) find themselves deeply in love.  Most famous and the climactic scene is as Gesler forces William Tell (Sean Anderson) to shoot an apple from the top of his son’s Jemmy’s (Sharin Apostolou) head with a crossbow.

…extraordinary wide ranges of blazing vocals of the talented ensemble…

The extraordinary wide ranges of blazing vocals of the talented ensemble also included flawless performances by Claudia Chapa as Hedwige, Jeffrey Beruan as Walter, Tim Augustin as Ruodi/Rodolphe, and Jeffrey Gates as Leuthold. The sensational supporting cast of singers and musicians along with conductor, Anthony Barrese, pianist, Elizabeth Parker, and chorus master, James Harp together produced bewitching sound. I sunk in my seat in amazement to see and hear Caroline Worra as Mathilde sing with so much depth and passion.

The opera is sung in French with projected English supertitles. I have had little opportunity to learn French, but I could follow the story easily. I felt the actors nonverbal expressions, movement and beautiful wide range of vocals were clear and were concisely telling the story.  I experienced the anxiety, fear and uncertainty as William Tell must have felt at that moment he would have to shoot the apple from the top of his son’s head, ordered by the Gesler. Then my energy and mood soared and changed, as Jemmy made it clear he was not afraid; encouraging his father.  As Tell’s  confidence grows and he finally realizes he can handle this and use the cross bow with the greatest accuracy.