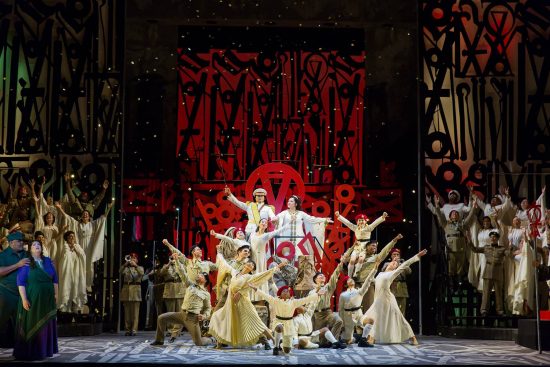 Celebration of Ramades’ triumphant return from war in Verdi’s Aida at the Washington National Opera – photo by Scott Suchman.

In its season opener, the Washington National Opera presents an “Aida” that, despite the interpretive efforts of the design team, still has Verdi’s voice ringing loudest and truest in this grandest of operas. The production prominently features the work of Los Angeles street artist RETNA (Marquis Duriel Lewis) as inspiration for set design. His work, an intricate system of hieroglyphic calligraphy, lends itself well to the ancient Egyptian setting of Verdi’s work. The broad strokes mingle in a manner that is texturally pleasing, yet distant and foreign.

However, this imagery is the only significant nod to the original setting. The stage structures, cold and concrete, are more evocative of a modern war-torn country than the lushness of life surrounding the old Nile. In her notes, director Francesca Zambello explains the costuming and sets as an effort to draw from RETNA’s work in a way that is evocative of both ancient and recent times. However, the conglomeration of military regalia and noble garb does more to muddle than it does to elicit.

The orchestra, led by Evan Rogister (a summer change from Michael Christie), were more direct in their interpretation, overtly going for climaxes and sensitively underpinning the more intimate moments. And, despite a rather mechanical treatment of the overture, it was quickly obvious that the music was the inspired moments of the evening would be found. The invocation scene during the prelude to war was one of these arresting moments where the orchestra’s sublime playing was complemented by the ethereal offstage chorus and captivating movements of the dancers.

This scene was also the first instance the audience was treated to the beautiful choreography of Jessica Lang, making her design debut with the WNO. This addition of ballet was a highlight of the evening and a welcome freshness to a production that was otherwise rather serious. Her decision to add playful children dancers to several scenes may have been a step too far in the direction of levity, but it was not to the point of detraction and certainly pleased the audience. More of Ms. Lang’s work would certainly be welcome.

A nod should go to director Zambello for her assembly of a fine singing cast. Tamara Wilson in the title role is a capable Aida with power and control for the acrobatic moments, yet also the ability to soften and draw the audience forward with her delicate tenderness. In her first solo moments, contemplating the conflict of love versus family and homeland, Wilson proves a master of the style and sets herself a cut above in bringing subtlety and range to her character. Her counterpart, Radamès, sung by Yonghoon Lee, has an exceptional voice for the role – powerful and ringing – but came off slightly stiff. His treatment of the aria “Celeste Aida” and his final duet of the opera, however, proved he is quite capable of expressing sensitivity and compassion.

The supporting cast was consistent throughout the night. As the adversarial Amneris, Ekaterina Semenchuk not only contended for the love of Radamès, but also nipped at the vocal heels of the leading role when given the chance. Morris Robinson’s Ramfis was stable and solid, but a bit outshone when paired with Soloman Howard’s King of Egypt – we’d like to hear more from him, please.

In all, this was a fine production that provided powerful moments tempered with tenderness and affection from the leading roles. Although aesthetically far from a bullseye, this did not shutter the drama and vision of Verdi, whose brilliant score and conception were the true stars of the evening.