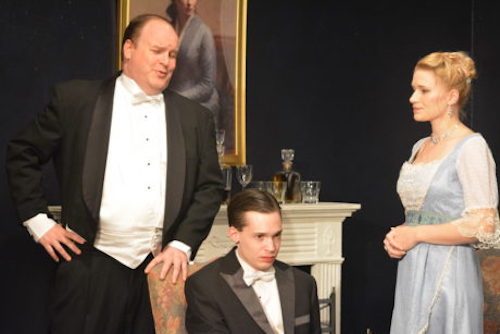 The Laurel Mill Playhouse is found in a lovely building in the historic district on Main Street, Laurel MD, neighboring fine restaurants, coffee cafes and shops.  The building is over one hundred years old and had been fully gutted and transformed from a storefront to a wonderful tiny theatre for the Laurel community to enjoy.

Directed by Illene Chalmers, “An Inspector Calls” was first performed in 1945 in the Soviet Union and written by J.B. Priestly.  Priestly was a British playwright, literary writer and politician.  “An Inspector Calls” is unlike any other drama with a murder mystery slant,  offering clever, thought provoking theories to the who done it with a twist!

…a twisted and shocking conclusion.

Who is to blame? Who drove this woman to her untimely death? Who is responsible for the death of Daisy Renton or Eva Smith?  The drama takes place prior to the world wars within a snobbish middle-class English family, the Birlings.

The head of the house is Arthur Birling, played by Jeff Dune, who effectively portrays snobbery and his personal concerns with climbing in business and maintaining a prominent family image in the community. Sybil Birling, the wife, played by Sam David, perfectly depicts the cold, cruel persona topped with total ignorance to what is actually happening right under her nose and the son, Eric Birling, portrayed by Kyle Kelley, who impressively plays a twenty-something, not sure of himself and somewhat shy.

At the most inconvenient time, during the Birling’s engagement celebration of socialite daughter, Sheila Birling (JilliAnne McCarty) to businessman Gerald Croft (Matt Leyendecker), they are interrupted by an unexpected visit by Inspector Goole, in a brilliant performance by Tom Piccin. JilliAnne McCarty is a natural in her role as Sheila Birling, expressing the complexities of her relationship with her fiancé and connection with Daisy Renton. Matt Leyendecker as Gerald Croft embodied his role as a male with chauvinistic attitudes and ideas about women of that time.

Inspector Mr. Goole is not only investigating the death of Daisy Renton, but he is determined to expose each Birling’s compromising morality and shortcomings, responsibilities and role they played in the death. The Inspector says, “We don’t live alone. We are members of one body. We are responsible for each other.”

The exquisite costumes by Linda Swann include elaborate long dresses worn by the ladies and the men in their double-breasted black suits.  Edna (Tracy Dye) the Birling’s Parlour Maid adorn costume was perfect. Inspector Goole’s costume, which included an appropriate long tan coat, fit the role quite nicely.

Overall, I was thoroughly entertained with the performances at Laurel Mill Playhouse. I really thought I had figured out who was the guilty party, but to my surprise the play had a twisted and shocking conclusion.