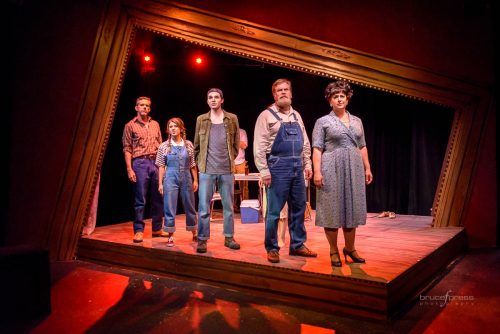 When I saw the movie adaptation of Robert James Waller’s book, “Bridges of Madison County,” I wept at the beautiful simplicity of the story.  When I saw the musical version on Broadway more than 20 years later, I wept again at hearing the perfectly written and performed score by Jason Robert Brown.  And when I saw it last weekend in Red Branch Theatre’s stellar production I cried like a baby through most of the second act.  Because this time I was struck by the not just the story, not just the magnificent voices, but the perfect blend of the two elements.  This show is a knock-out that packs an emotional punch that can leave you breathless.  Is it a perfect production?  No, but it’s so heartfelt and so entertaining that any little glitches don’t really bear mentioning.

“Bridges of Madison County” tells the tale of Italian immigrant and Iowa housewife Francesca Johnson.  18 years after leaving the rubble of post-war Naples, she is resigned to her life as a wife and mother – and not much else.  When her husband and two teenaged children leave her alone for a few days to travel to the Indiana State Fair, she is at loose ends until a fascinating stranger turns up in her driveway.  Robert Kincaid is a photographer from National Geographic, on an assignment to shoot the bridges of the title.  When she finds herself at first drawn to, then falling in love with him, it sets off a small chain of events that affects the rest of their lives.

…packs an emotional punch that can leave you breathless.

Clare Shaffer has cleverly directed this piece with a slow, sure hand.  While the pace tended to slow from time to time, she added enough deft touches to keep the action moving and never allows it to sag for very long.  With the added touch of silhouettes behind a gauzy backdrop, she displays a terrific sense of theatricality.  Lyn Joselyn’s imaginative lighting perfectly accents the minimal set to great effect.  The set itself is deceptively simple.  A large off-kilter picture frame surrounds the proscenium stage, which is set with by turns a 50s era kitchen table and chairs or a bed and bed stand.  A large trunk serves as a truck (you kinda have to see it) but it all works beautifully.  Nicely done set, Jacob Cordell.  Camille Petrillo has dressed the cast in period appropriate Iowa style, down to the shoes.

Music Director Paige Rammelkamp has done a terrific job with the four piece band.  As for the voices, there is not a wrong note among them and the difficult score sounds lush and full when it needs to and quietly contemplative when it’s called for.  There is not much choreography but what was there was well-planned by Kathy Gordon and well done by the cast.

With a cast this small even one off-element would stand out like tap shoes on a bullfrog.  Luckily, there were none. As the young daughter, Carolyn, Victoria Meyrs is annoyingly juvenile and perfectly sulky with a surprisingly strong belt and solid acting chops.  Carson Collins does a strong turn as son Michael.  Lanky and long of limb, he moves with a surprising grace and has a full throated voice that fills the room.  It’s always a nice surprise when a body like his contains such big vocals.  A fine looking lad and a very good actor.  Brian Lyons-Burke as Charlie has a deadpan delivery that is as familiar as it is comforting.  His singing is outstanding (he doesn’t look like he can sing the blues as well as he does!) and “When I’m Gone” is a bittersweet testament to his life that he sings exceptionally well.

Chani Wereley is wonderful as Marian/Chiara/State Fair Singer.  In all three incarnations, she shows such a range of talent that I wanted to see much more of her.  An accomplished guitar player, she is polished and professional in her first song, “Another Life.”  When she dances the part of Chiara, she is slinky and seductive, and when she cuts loose on “State Road 21” she’s as fun as all get-out.  A real bundle of energy and talent with an excellent voice and plenty of skill as a dancer to boot.

I overheard some audience members at intermission discussing the play and saying how much they enjoyed Gillian Shelly Lawler as Marge.  I agree one hundred percent.  For some reason she reminded me of Vivian Vance with dark hair and more style.  She is funny, engaging and totally believable as the neighbor who knows more than she should and still doesn’t judge her friend but does worry that Francesca may be headed for trouble. When she sings “Get Closer” she is a throwback to the days of Rosemary Clooney and that ilk and it fits her like a glove.  She is a delight every time she takes the stage and can steal a scene with one thrust of her hips.

Chad Wheeler as Bud is as suited to the part as a duck is to water.  This tall drink of water with a big ol’ Mid-Western twang and a voice you want to listen to sing anything he wants is a picture of confused hurt every time he plays a scene where he calls Francesca from the State Fair and she rushes him off the phone.  He suspects something is wrong and wants desperately to fix it but is as clueless as most husbands of the mid-60s were about matters of the heart where an unhappy wife is concerned.  His emotions are not on his sleeve but they are certainly in his eyes.  And that is a level of talent that is always a revelation to behold.

I’m running out of superlatives to write about Ryan Burke.  He was brilliant in “Memphis” last month and this time out he’s even better.  His Robert is at once tender and tentative, and when he makes up his mind that Francesca is all he’s ever been looking for, he sings “Something From a Dream” so lovingly that it brought a tear to my eye and a lump to my throat.  But then again that happened pretty much every time he opened his mouth to sing.  Burke can act with every bit as much skill as any actor I’ve seen in this area.  He is wonderful and I can’t think of anything else to say about him so I’ll repeat it – he’s wonderful.

Erin Granfield is one of those rare actresses on local stages that makes you completely forget she’s playing a character.  She is Francesca.  She’s stepping into some mighty big shoes, following the likes of Meryl Streep and Kelli O’Hara.  Scratch that – this lady’s got her own shoes.  With a voice that can go from a whisper to a wail and rip your heart out along the way, she’s perfection in this part.  Shy and yearning for more life – or something. In her scenes with Robert, we watch her resolve melt away as she throws herself into an affair that she knows will cost her dearly.  And we see it all in Ms. Granfield’s expressions and her body language.  If I had to pick a favorite song I couldn’t.  From the opening number “To Build A Home” to her final “Always Better” her voice is amazing.   She is a gifted performer and a true artist.

“Bridges of Madison County” is a tear-jerking soap opera piece of work.  I loved every minute of it.  Treat yourself, but bring your hanky.  You’re going to need it.