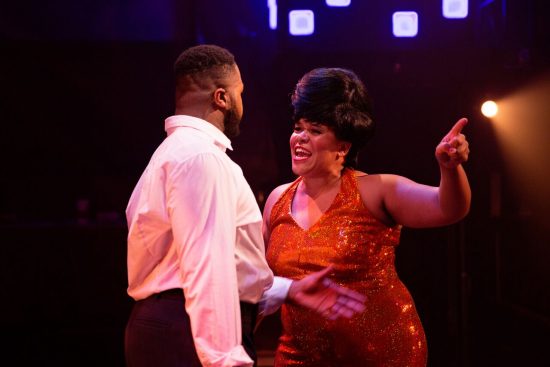 Don’t Blink and don’t wait to get your tickets for this enigmatic roller coaster of musical fun! From the second the cast of “Dreamgirls” hit the stage at Toby’s on Thursday night it was a nonstop, song and dance spectacular filled with sassy, sexy, sashaying songstresses.

Directed by Kevin McAllister with Musical Direction by Ross Scott Rawlings and Choreography by Shalyce Hemby, “Dreamgirls” is a must for all Motown fans. If you enjoy the soul music that dominated the 60s and 70s get your ticket today. So rarely is there a movie, television show or musical production created these days that is female dominated and the ladies of “Dreamgirls” left no doubt that Toby’s success is in part to the constant pool of new and exciting talent it brings to its stage.

“Dreamgirls” is the 101 of show business, the good the bad the ugly and along the way the exceptionally talented.

The show opens with a scene at an amateur talent show at the legendary Apollo Theatre in New York City, and it doesn’t miss a beat. “The Stepp Sisters,” Samantha McEwen Deininger, Denae’ Fielder, Ashley K. Nicholas, and Taylor Washington kicked off with harmonies as tight and jaw droppingly fabulous as their sequin dresses. The four divas set the pace for the show that moves quickly and effortlessly.

When it was time for the boys to step up– they brought it (as the kids would say). “Little Albert and the Tru-Tones,” David Singleton, Bryan Archibald, Hasani Allen, Gregory Banks and Solomon Parker III sang in harmony, and danced their way through the talent show.

There are four seating areas at Toby’s with the circular stage in the center of the room. The choreography was well placed and spaced for each seating area to enjoy. Where ever you sit your entire evening is not spent looking at the back of the performers heads a task not always easy to achieve as a choreographer. The use of the space impressed me using stairwells and upper balconies to add dimension and variation.

Next group to perform in the amateur night — “The Dreamettes” lacking the flash and shimmer of “The Stepp Sisters” what they lacked in sequins the brought in abundance with their vocal ability and charisma. The choreography is such a huge part of the roles, and progression as “The Dreamettes” rise to fame and the style perfectly matches the era and music.

Anwar Thomas plays the manager of the fabulous Jimmy Thunder Early. Thomas has a big personality with a big voice to match as he fills out the harmonies on several songs, as well as confronting Curtis Taylor, Jr, a slick car salesman turned talent promoter.

“The Dreamettes” soon to become the “The Dreams” may not have the success they deserve at the talent show, but lady luck shines on them as they head out on tour with Jimmy Thunder Early.

Bryan Jeffrey plays Early and to say this young man has pizzazz by the bucketful would be an understatement. So, I won’t say it – wait I said it. Jeffrey sings, dances and brings comedic moments throughout the show in his passionate and over the top performance. I think the ladies in the audience would agree he has some sexy moves and good taste in boxer shorts! Enough on that.
An astonishing vocal ability and a personality that is a mixture of Eddie Murphy, James Brown, throw in some Little Richard, the sex appeal of Prince and the eccentricity of Don King! It was no surprise to read about the many show credits Jeffrey has under his belt.

As his U.S. tour kicks off large screens placed around the room help to visualize the road trip across America – nice touch!

There are no weak cast members in this show – a rare note to make when reviewing a show that requires so much intense energy and sheer talent. There are musicals you can fudge your way through as a mediocre singer “Dreamgirls” is not one of them – no matter how small a role you play.

Speaking of talent Crystal Freeman plays Effie Melody White, I may never sing another song after hearing this lady belt out her songs. Jennifer Hudson would throw away her vocal zone lozenges and jazz shoes while Beyoncé would bow down in admiration if they heard this Prince Georges’ County elementary school teacher sing. Beyoncé played the role of Deena in the movie version, while Hudson played Effie. The hairs on my arms just stood on end recalling Freeman’s performance.

During Freeman’s performance of “And I am Telling You I’m Not Going,” she sings with fierce and raw passion, and emotion right into the eye of the man she loves– Curtis. Freeman tussles and tries to hold him close as he pulls away and she doesn’t miss a beat. To sing a song of this magnitude well into a microphone with no external factors or movement is difficult – to do it while trying to hold on to the man who is quickly slipping away and still keep the emotion and perfect intonation is outstanding. White is without question one of the most talented singers I have seen in a long time. Later in the show, after her diva tantrums have subsided and the call of being a mom settles her emotions –watching her performing during a scene in a nightclub, I felt like I had been invited into an exclusive club to watch this incredible performer on stage.

There is no question that Freeman is a real dream girl, and rightly so she shines brightly following in the footsteps of divas before her as Effie.

It’s hard to believe that this is Da’Von Moody’s professional theatre debut I couldn’t take my eyes off him as Effie’s brother C.C. This young man has a very bright future, he looks great, his voice is rich, powerful and very distinctive and he has the moves. A dominant performance as he is forced to turn his back on family, only to realize that is where his focus should be to help his sister get the actual success she deserves.

DeCarlo Raspberry plays Curtis Taylor, Jr. and holds his own throughout the show as a car salesman turned talent manager. Please excuse me if I don’t remember your name, or even your face at first but I rarely forget a voice. I remember this young man as one of the voices of “Show Boat” earlier this year – also at Toby’s Dinner Theatre. Any women who has ever been dumped for a “perceived” hotter chick feels no love for his character; (Size zero is so over rated!) However, it’s hard not to adore his rich, smooth voice giving a solid performance at all times.

Making up the rest of “The Dream” team are Lorrell Robinson played by Ashley Johnson and Deena Jones played by Sequina DuBose. What a great name! (note to self-google how to change my name to Sequina). How do you cast two females to perform next to such a dynamic, diverse and distinctive diva as Freeman?

In Toby’s world, it’s simple; you cast the best. That sums up Johnson and DuBose. DuBose character develops from a silly, fun loving girl to a dominant diva. Her voice, while different to Freeman’s, is exceptionally powerful as she shows a wide vocal range. She flips the switch like a DJ mixing his beats – from the demure, sweet hearted, dippy Deena to the fabulous Miss Deena Jones.

Johnson completes the talented trio with a voice that will leave you wanting more. Not surprisingly this year she celebrates her 10th year performing at Toby’s. Her character is solid in transitioning from the star struck young girl who falls for the charms and charisma of Jimmy Thunder Early to the vivacious and voluptuous vixen who will sing you into submission, and you will surrender. She has stage presence in abundance and a smile that lights up any moment she shares with the audience. Her voice is distinct, strong and emotionally flawless. I can’t wait to see this young woman in her future performances and endeavors. All three ladies while singing with such conviction still manage to hold down some basic yet effective choreography working exceptionally well together.

Last to the party but by no means the least Denae’ Fielder takes the place of Effie in the trio as Michelle Morris. Big shoes to fill. Fielder nails it – showing she has the talent to join the group with her strong vocals and fancy footwork. Her powerful voice a match for the scintillating trio. Fielder also plays one of “The Stepp Sisters” so she kicks off the show and her big moment comes later in the show – she is warmed up and ready to hit it.

So many notable smaller roles in this show. Greg Watkins played the role of the M.C  very well in his debut performance at Toby’s, making sure the show flowed from the start.

Shout out to Justin Calhoun in the cameo role of Dave—let’s not beat around the bush, the only white singing male in a show filled with super talented tonsils. Calhoun hit all the right notes and held his own – he is a great character actor and singer. Again, a familiar face to me from a performance of “Show Boat” when he played the role of a bad actor! Acting like a bad actor – I mean that can’t be easy. (On a side note, he is also the most delightful young man who served me throughout the buffet and intermission).

The ensemble, many of whom flip-flop between smaller roles is strong and kept up the energy with a show that moved at one hundred miles per hour. They are often moving sets and juggling props as they sing and dance.

The sets are simple, movable and well-timed. Various platforms are used for staging. My Favorite aspect of the production is the circular theatre curtain that drops from the center of the stage- dramatic – loved it!

I am hoping that Larence B. Munsey invites me one day to see the plethora of costumes he has acquired, created or borrowed throughout this career.  The “Dreamgirls”  closet is a sequin queens dream with all the glamorous gowns and stage wear. There is also a very distinct shift in style as the times and music change. Great job.

All this backed by a live band led by Ross Scott Rawlings and a buffet with something to suit everyone’s pallet.

It’s no surprise to me that Toby’s will soon be able to hold larger audiences in a new space on the parking lot of the current location.

Toby’s will continue to entertain in their current building while the New Cultural Center is being built. According to Patch.com the seven story building will consist of five residential floors while the first two floors will feature arts venues including Toby’s.

Chances that I will return to watch this show a second time: Highly likely.

Running Time: 2 hours and 45 minutes with one 20 minute intermission.