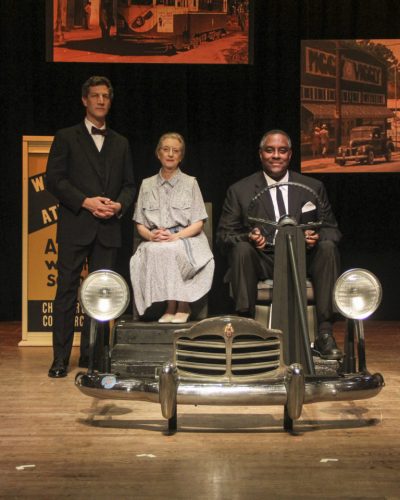 Great theatre sometimes just needs a classic mix of opposites. Could this one be any more diametric? Sit back and enjoy the ride. A little bumpy, but those 1940s Cadillacs had big springs.

Miss Daisy Werthan, a widowed, 70-year-old, upper middle class Southern Jew (‘Don’t call me rich!’) and Hoke Colburn, a middle aged uneducated black man who works itinerant driving jobs, are forcibly brought together and indeed, share half a lifetime in The Little Theatre of Alexandria’s “Driving Miss Daisy.” She insists she’s not prejudiced, and probably believes it. And as time goes by, she tries harder not to be. Hoke, who knows he must stay in his place to keep his job, has frustrations that always simmer and sometimes boil over. Just like family.

Alfred Uhry’s Pulitzer prize-winning 1989 is sharp and well written–it reeks of honesty. Some look at the play, popularized by the film starring Jessica Tandy and Morgan Freeman as not much more than a cute anecdote about the growing amity between a cranky white woman and her elderly black chauffeur. But, however simple the play, it has moments that speak for themselves in power and poignancy.

Miss Daisy (local theatre stalwart Patricia Kratzer) is a testy Atlanta widow who, after crashing the car, is persuaded by her concerned son Boolie (you know you are in the south) to take on a chauffeur to get her around. Played by Joel Durgavich, Boolie portrayed the exasperated son in an unappreciated role.

…moments that speak for themselves in power and poignancy.

Covering a quarter century of time together, in moments casual and monumental, (referencing the civil rights movement and the changing desegregation, the bombing of the local temple), we watch as a relationship slowly blends, with grudging understanding on both sides.

In walks Hoke (Kevin Sockwell), with the ease of a well-worn pair of gloves) to interview for the job. After taking a liking to the affable, upfront Hoke, Boolie hires him as a chauffeur for his mother…but is he up for the task? High strung, exacting, and reluctant to give up her independence, Daisy is not an easy person to get along with. After impolitely rebuffing him for nearly a week, she finally concedes to be driven by Hoke, who tells Boolie excitedly, “only took six days. Same time it took the Lord to make the world!”

In 28 scenes, simple vignettes that provided a view to their bumpy journey, their bond, though slow to grow, becomes strong as time goes on. From simple squabbling about how to drive, to shared gossip about in-laws to the senseless violence that derails a trip they are taking, we see the outpouring of trust. When the KKK bomb a Temple in Atlanta, Daisy asks plaintively “Who would do such a thing? “ Hoke sagely replies “You know as good as me. Always the same ones.”

In another scene, Miss Daisy finds out that Hoke can’t read. The marvelous dialogue brings out Daisy’s always-rightness and Hoke’s lighthearted approach to challenges in life.

Kratzer’s pacing as Miss Daisy is consistent and convincing, downplaying her bitterness in her situation and bringing a certain dignity. Her aging over the 25 years is appropriately gradual and her frantic tones as an aging, semi-powerless woman echoed true. Sockwell’s Hoke had a more gregarious approach, with wide eyes and an easy smile—his gentle country accent evoked a country road in Alabama.

Producer Carol Strachan and Director Jim Howard have let this simple yet effective format follow through. It literally drives itself, yet simple-yet-effective techniques are used so that the audience’s main focus is where it should be for this dialogue-driven play–on the actors.

A special note for Lynn Lacey with Sound Design, invoking several nice touches, including the initial Miss daisy auto incident, replete with a wobbly hubcap coming to rest. Later, three sides of the theatre are illuminated with Christmas lights as Miss Daisy and Hoke drive to Boolie’s house at Christmastime. The set is straightforward with pictures that evoke different milestones of the play, which don’t add to the presentation. But the carved out skeleton of a car is a nice central piece composed of different vehicles used by Hoke over the years.

It is clear that the two have lived very different lives, but just by spending so much time together, they merge. It could be that the characters don’t REALLY change; they just appreciate and understand each other as they both age together. Kind of like life.