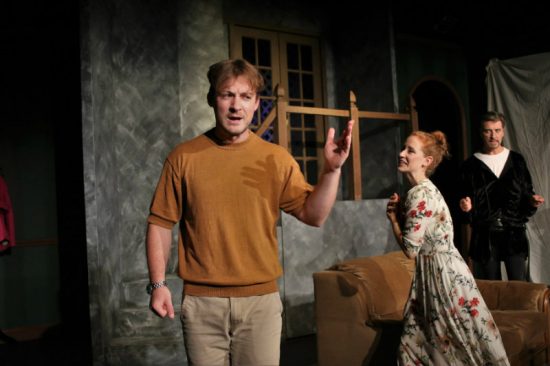 “I Hate Hamlet” is about an up-and-coming young television star named Andrew Rally who is offered to play the role of Hamlet on stage. Believe it or not, this actor hates Hamlet. John Barrymore, famous for playing the role of Hamlet, returns as a ghost to reclaim his role as the two embark on a “wildly funny duel over women, art, success, duty, television, and yes, even the apartment where Barrymore once lived!”

Mark Franceschini’s expert direction allows every member of the cast to shine in this must-see production.  In particular, Franceshini does an excellent job at extracting a variety of emotions from the cast, bringing them to the current moment, never wavering throughout the entire play.  What is more, Mark Franceschini is able to strike a fine balance in creating the appropriate moods of comedy and drama, all woven together seamlessly.

Mark Franceschini’s expert direction allows every member of the cast to shine in this must-see production.

The very talented Gabe Fremuth as Andrew Rally, shows a range between self-doubt and self-worth, developed over the course of two hours. His performance inspired the audience to look inside oneself to determine what would satisfy their own destiny.

Andrew Rally’s chaste girlfriend, Deidre McDavey, played by a vibrant Abbie Wright, holds onto her beliefs, all while showing enthusiasm for Barrymore.

Steven Shriner’s engaging performance as John Barrymore lets the audience into the world of a man who hides behind an image of a classic actor, yet is a flawed man.  With pride of his triumph as Hamlet, the lack of understanding in his path to achieve success lets Barrymore relate to Andrew’s struggle between artistic and financial success.  His introduction as the old Hamlet summoned to guide the new Hamlet until he takes on the role is more than an acting mentor.  This relationship provides redemption for both Barrymore and Andrew.  Shriner shows a range from sarcasm to empathy to self-reflection within his performance that shines a bright light onto this production.

The conflict between Laertes and Hamlet from the final sword fight in the play “Hamlet” sees the fight choreography of Tegan Williams placed center stage with Barrymore and Andrew taking the respective roles.  This scene shows maximum use of the stage for an action sequence to make any fan of the Bard proud.  The change in Andrew from television actor to Shakespearean professional becomes evident within this scene that closes Act I.

The cast is rounded off by Andrew’s agent, Lillian Troy played by Kimberley Lynn, who shows how memories never fade and how youth is wasted on the young;  J Purnell Hargrove is Gary, the producer, and director who wants Andrew to go to network television with a pilot offer and make millions; Zarah Rautell is Felicia Dantine, Andrew’s real estate agent who claims she is able to communicate with departed spirits.

“To be or not to be” has always been the question related to Hamlet.   The comfort zone many people stay in is addressed in magnificent fashion in this outstanding production. The question that “I Hate Hamlet” presents is accepting the challenge as well as addressing your own fears.   With enough Shakespeare to keep the purists happy and enough modern day to keep the “newbies” happy, this balance opens the door for a variety of audience to enjoy this wonderful story.