Theatre Review: ‘In the Heights’ at Olney Theatre Center 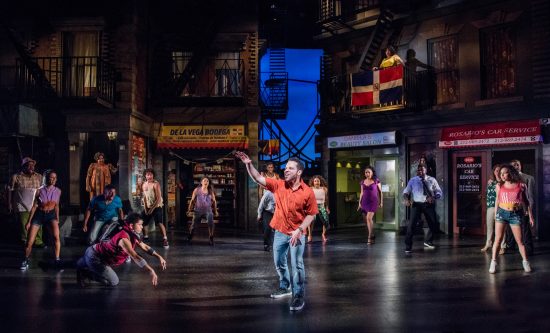 Robin de Jesús leads the company of ‘In the Heights’ at the Olney Theatre Center. Photo by: Stan Barouh.

Any successful musical offers at least one great moment for audiences to remember.  Kicking off the 2017-18 Season, the Olney Theatre Center partnering with the Round House Theatre in presenting “In the Heights,” there may have been 96,000 such moments.  A sensational cast and crew under the meticulous direction of Marcos Santana have delivered a winning musical lottery ticket to local theatergoers.

Tony Award-nominated Robin de Jesús, who portrayed Sonny in the original Broadway production of “In the Heights,” stars as Usnavi on the Main Stage at Olney Theatre Center.  Lin-Manuel Miranda who played Usnavi in the Broadway production and received a Tony nomination for that role composed the music and lyrics and won the Tony in that capacity. Quiara Alegria Hudes wrote the book. In all, the show captured four such statues including Best Musical.  Miranda’s success with “In the Heights” propelled him to mega-stardom in “Hamilton.”

The story unfolds in the gritty, largely Hispanic working class Washington Heights barrio or neighborhood of Upper Manhattan, near the George Washington Bridge during a typically sultry three-day period surrounding July 4.  Each character has his or her story, but they are all connected in some fashion.

A youthful vibrant ensemble clad in hip street clothing designed by Frank Labovitz adds spice to this rich mixture of contemporary urban hip-hop, salsa and other Latin rhythms that tell the story of family drama, financial struggles, community spirit, love, devotion, expectations, dreams realized and those not fulfilled. And one of the characters just won a $96,000 lottery prize adding another element to the story.

…an abundance of talent, technical expertise, a solid score, and humanity…

All the action takes place on a magnificent set designed by Milagros Ponce de León.  The barrio depicted in the set consists of businesses, such as De La Vega Bodega (convenience store), Daniela’s Beauty Salon and Rosario’s Car Service as well as apartment buildings, entrances to the buildings and fire escapes.  The creative and functional multi-tiered set even includes the 181st Street “A” train station with the subway grate on the sidewalk, with, yes, steam bellowing out of it before the show as the sound of a train is heard barreling down the tracks underneath.

That set provides the backdrop to most of the story.  But when the scene shifts to a dance club, no problemo.  Fast and seamlessly, the transformation occurs.

So detailed is Mr. Santana’s direction that the actors not performing as principals in a particular scene are engaged in background activity or conversation in any of these businesses or meandering about in the apartments.  Cheerfully, none of this background staging becomes a distraction; instead, the subtle movements add realism and dimension to the visuals.

Enhancing the eye-pleasing set is the extraordinary lighting design by Cory Pattak.  A highlight is the fireworks display where the lighting effectively simulated this activity.

“In the Heights” contains many high points in the way of individual musical performances, either as solos or duets.  The main performers along with the rest of the ensemble also burnish their talents in the stirring high-energy production numbers like the title song and opening number “In the Heights,” “96,000,” “Blackout,” and “Carnaval Del Barrio.”

The ensemble sing and dance with dazzling energy to the music that in some instances contains a mix of Spanish and English lyrics.  However, the songs were composed in a way that one didn’t have to know Spanish to understand their messages.

While some of the songs are not necessarily melodious, they are all solid because of the powerful and affecting lyrics as well as the amazing vocals by the cast members.

Numbers, such as “In The Heights,” “Breathe,” “Inútil,” “No Me Diga,” “Paciencia Y Fe,”  “When You’re Home,” “Piragua,” “Sunrise,” and “Everything I Know” stand out.  Most of the high tempo songs (and the better ones) are performed in the first act while more ballads can be heard in the second—a distinct change in mood.

Robin de Jesús is remarkable in the role of Usnavi, a Dominican-born owner of the bodega who is a central character throughout.  His passion and hopes, which include returning to his native Dominican Republic, are conveyed with great skill.  Most of his dialogue and songs are performed in rap, and he is wonderful at it.

Rayanne Gonzales is moving as Abuela (Grandmother) Claudia who practically raised Usnavi after his parents died.  She is the barrio’s loveable matriarch, the moral anchor.  Her stellar voice is evident in the tender “Paciencia Y Fe” and “Hundreds of Stories.”

Stunning Linedy Genao plays Vanessa, Usnavi’s love interest, who is looking to escape the barrio and move downtown but can’t afford it.   She possesses a glorious mezzo-soprano voice, and her performance in “It Won’t Be Long Now” shines.

Also spectacular with her vocals is Mili Diaz as Nina.  Ms. Diaz’s Broadway-caliber soprano voice is as good as it gets with memorable selections as “Breathe,” “Everything I Know” and “When the Sun Goes Down.”

Nina was the one member of the barrio who went off to college (Stanford University) on a scholarship only to fail in her first year, deeply disappointing her parents, Kevin and Camila.  She develops a relationship with Benny much to the chagrin of her father.

Danny Bolero plays Nina’s overprotective father Kevin and the owner of Rosario’s Car Service which he feel compelled to sell to help Nina with her tuition. Mr. Bolero is sturdy in both acting and singing with his commanding baritone voice on display.  His emotional solos in “Inútil (Useless)” and “Atención” are stellar.  Vilma Gil is enjoyable as Nina’s steadfast mother Camila. Skillful in her acting, she does well in her powerful rendition of “Enough.”

Another standout is Marquise White as Benny, who is in love with Nina and an employee of Kevin’s taxi service and is the only non-Hispanic character.  Also demonstrating strong acting and musical ability, Mr. White is particularly effective in the duets “When You’re Home” and “When The Sun Goes Down” with Ms. Diaz.

Natascia Diaz as Daniela, the chatty, gossipy owner of the beauty salon, is effective in that role and also demonstrates her vocal prowess in “No Me Diga.”  Her employee, Carla, is played well by Melissa Victor.

Tobias A. Young, yet another strong vocalist, plays the role of Piragua Guy who pushes a shaved ice dessert cart in the barrio and competes with the Mister Softee truck.  He truly has one of the most beautiful voices in local theatre and is a joy to listen to. Mr. Young participates in the group numbers and sings the aptly named “Piragua” as a solo—and does it twice!

Then there is Usnavi’s cousin Sonny, who works with him at the bodega.  Played fabulously by Michael J. Mainwaring, the character provides most of the comedic moments in the show.  Mr. Mainwaring’s comedic timing and stage movements excel. Juan Drigo Ricafort rounds out the stellar cast as Sonny’s good chum Graffiti Pete whose artistry leads to an inspirational ending, tying a bow on this gift of a show.

There is an abundance of talent, technical expertise, a solid score, and humanity in the story that makes “In the Heights” a must-see experience.  Thank you to the Olney Theatre Center and the Round House Theatre for putting together such an extraordinary cast and crew helmed by a terrific director.

What a great show!

Running time. Two hours and 30 minutes with an intermission.

Advisory: “In the Heights” contains adult language and sexual situations and is not recommended for children under age 13.