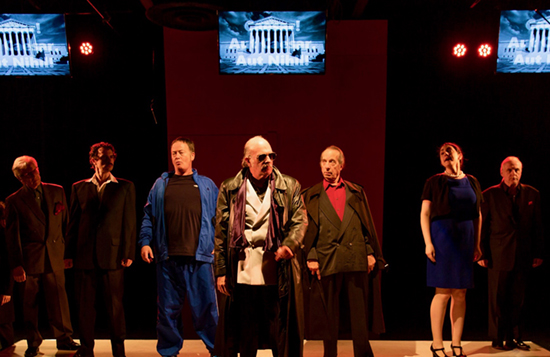 The cast of Julius Caesar. Photo by Jae Yi Photography.

“How many ages hence/ Shall this our lofty scene be acted over/ In states unborn and accents yet unknown!” Caius Cassius makes this prediction about his legacy after helping to assassinate the title character in Shakespeare’s “Julius Caesar.” The scene, and the play, dealing as it does with the fate of political insiders, has, in fact, come back into the public consciousness with a force.

Oskar Eustis’s Delacorte Theatre production for Shakespeare in the Park drew a clear parallel with the Trump administration, as well as protesters. While Scena Theatre’s delicious new production is definitely D.C.-set, it is less interested in real-life parallels with existing political figures, and more interested in lampooning power itself.

The play begins with a triumphant Caesar returning home to Rome after successfully defeating his rivals. While the Roman people welcome him, Caesar’s newfound popularity makes other members of the aristocracy uneasy. Nobleman Cassius convinces Brutus, a friend of Caesar’s, that the general and would-be Emperor should be assassinated to preserve Rome as a republic. The two organize and execute the assassination, putting themselves in the cross-hairs of Caesar’s closest ally, Mark Antony.

The production benefits from artistic director Robert McNamara’s specific and singular vision of Caesar (he also plays the lead). His directorial vision is an inventive blend of classical theatre with modern cinematic panache. Cast members remain onstage and act as a chorus, standing in for the audience’s reactions and creating a spoken and sung soundtrack for onstage action. The performance also has a visual soundtrack, communicated on three screens (set design by Jonathan Dahm Robertson) which provide setting information, emphasize plot points, and, more humorously, show updates from 24-hour fictional news network “RNN.”

The screens and the style of the show locate the story in the American political present. But while it’s set in the capital, the cast’s loose-fitting suits, courtesy of costume designer Heather Jackson, recall not Washington insiders, but Goodfella’s type gangsters. Caesar’s double-breasted white suit, gold chain and purple silk stole announce him as a low-class mobster with high-class aspirations.

From the moment McNamara marches onstage as Caesar with his retinue, face distorted in an arrogant snarl, he is total, bombastic fun. Caressing syllables like a villain, sauntering loosely around the stage, he is a walking self-parody of power.

Their dynamic is completed with Barry McEvoy as Mark Antony, in an impressive portrayal. His salt-of-the-earth Antony contrasts nicely with noble conspirators Brutus and Cassius. Ranging from affable persuasiveness to blazing rage, McEvoy’s “Lend me your ears” speech, during which he seduces a mob of blue-collar Romans to his side, features both excellent acting and stagecraft.

Though it reaches a predictably tragic conclusion, the production’s finest jabs are accomplished through humor. While Mark Antony and Octavius Caesar (a great Robert Sheire) oversee their field of battle, the gravity of the moment is somewhat undercut by the fact that they are gazing at a toy tank and plane. The visual gag is a good example of the production’s contempt for the generals in particular, and “big men” in general. It is also a good example of the great amount of enjoyment to be had from this richly textured, finely acted night of theatre.

“Julius Caesar” plays through Sept. 24 at the ATLAS Performing Arts Center. For tickets or more information call 202-399-7993 or click here.