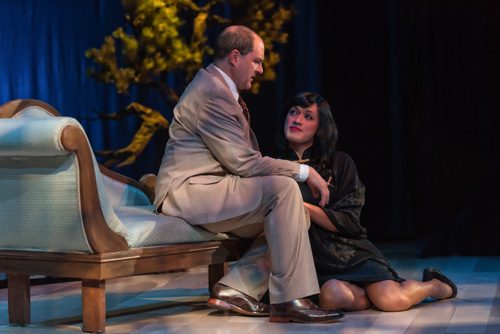 Everyman opens its 2017-18 theater season with a powerhouse production of the critically acclaimed “M. Butterfly” written by David Henry Hwang. Artistic Director Vincent Lancisi directs resident company member Bruce Randolph Nelson who plays Rene Gallimard, the central character based on the infamous Bernard Boursicot. Through a series of amazing events, both had the opportunity to meet the real Boursicot in France this past summer.

The play fictionalizes the real life relationship and downfall of a married French diplomat, Bernard Boursicot who fell in love with a Peking opera star Shi Pei Pu while stationed in China. Unbelievably, the two carried on a 20-year affair before Boursicot discovered his lover was not only a man but also a Chinese spy. During the trial, he claimed he passed on sensitive information to the Chinese to protect the singer from persecution and so he would be allowed to see her. In 1986, the two men were ultimately tried and sentenced to six years in jail.

“M. Butterfly” first premiered on Broadway in 1988, garnering numerous awards including the Tony Award, the Drama Desk and Outer Critics Circle Awards for Best New Play and was a 1989 Pulitzer Prize finalist. Based on real life events, this is an imagined story of fantasy, obsession and betrayal and how sex and gender politics intertwine with the world politics. Rene Gallimard recounts his tale to the audience from his cell ­– the time and place of each scene established with projections on the side walls of the set. Like real memory, his are sometimes disjointed, with a touch of madness.

There were many revolutions going on in the 60s and 70s that reshaped the political and sexual landscape – the Mao Cultural Revolution in China, the United States’ ill-fated involvement with the Viet Nam War, as well as the sexual revolution for women and the gay community.

Rene Gallimard is obsessed with the tale of Puccini’s “Madame Butterfly” and its story of Navy Lt. Pinkerton and his Japanese wife of convenience, Madame Butterfly, whom he abandoned. Despite his many cruelties, she remained loyal. Rene is an average looking man who never had any hopes of a beautiful woman loving him. When he first sees Song (coincidentally singing from “Madame Butterfly”) he falls in love with her as she represents the exotic, fantasy world of his favorite opera. Though he is guilty of some cruelty of his own in the beginning of his relationship with Song, it turns out he is the one being manipulated.

In his Everyman debut as Song Liling or Butterfly (as Rene calls his paramour), Vichet Chum is beguiling. He captures the essence and embodies the “woman” who fulfills Rene’s romantic dreams of the delicate, submissive Asian flower. Chum then becomes the cruel and snarky actor/spy he truly is. His transformation takes place during the short second intermission but it was so captivating to watch with Miles Davis’ “Kind Of Blue” playing in the background, no one left.

There is nothing that can be said about Bruce Randolph Nelson that hasn’t been in every role he takes on. He is simply brilliant as Rene Gallimard. His performance casts a spell that is full of humor, cruelty, and sadness.

The rest of the cast, who move in and out of multiple roles with ease, deserve high praise as well: Yaegel T. Welch as his long-time friend Marc; Katharine Ariyan, with a great sense of comic timing, as the young Danish student whom he also has an affair and represents the new breed of sexually-liberated women; Christopher Bloch as his deceitful and morally bankrupt boss and Tuyet Thi Pham as Song’s fervent, communist handler. Always a gem, company member Deborah Hazlett as Rene’s clueless wife Helga may be the only truly sympathetic character in the play.

Lancisi has assembled an incredible creative team to produce a simple yet stunning vision. Yu-Hsuan Chen, who designed last year’s “Great Expectations,” returns with another dazzling set design. Some may see it immediately or it may come as a slow realization. The entire set – from the stage floor itself to the cut out opening in the set wall that is a scrim over cell-like bars – is a literal symbol of the play itself. Jay Herzog contributes dazzling lighting design and with simple set pieces, the audience is transported back and forth in time and place – from a jail cell in the present to China and Paris from 1960 to 1988. Costume Designer Eric Abele who worked on the final show of last season, “Noises Off,” returns to create a series of gorgeous and detailed period costumes for the cast, including utilizing vintage kimono fabrics for Song’s rich opera dresses.

Chu Shan Zhu, who is the director of the Washington Chu Shan Chinese Opera Institute, choreographs an authentic – and frightening – communist Chinese Revolution “dance” that includes a huge flag and a gun.

It is practically impossible for Everyman not to deliver an incredible show. So while the upcoming Broadway season brings another revival of “M. Butterfly” (with supposedly new material) that includes heavy-hitters actor Clive Owen and Julie Taymor as director, it’s hard to imagine that they could equal Everyman’s beautiful and mesmerizing production.