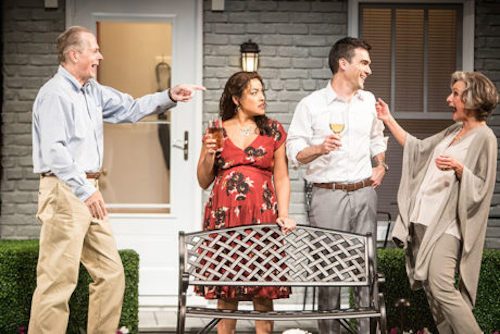 Karen Zacarías’ new play “Native Gardens” condenses some issues we are facing in our country today into two backyards right here in DC. It is a wonderful exploration of the current sociopolitical climate in a cheerful and ridiculous way, therefore making it less intimidating or aggressive. It doesn’t back away from anything and is a truly funny and thoughtful night of theatre.

The audience is greeted by two houses in one of our own local historical and ostentatious neighborhoods. One home is immaculate with a pristine English garden, full of hydrangeas, ivy, and pansies. The other home is in disrepair with a dead yard but it has a magnificent oak tree. It was almost jarring just how realistic these two backyards were. Set designer Joseph Tilford brought us into a world all too familiar to many audience members.

The well lived in home belongs to Frank and Virginia Butley, who has lived in the home for decades and each has high paying government jobs. The home that needs some work was recently purchased by Pablo and Tania Del Valle, a promising lawyer and a very pregnant Ph.D. candidate.

It soon comes to everyone’s attention that the assumed property border is not the correct one and tensions grow high. It is an interesting parallel to current conversations happening between different communities. It shows healthy, and unhealthy, ways of dealing with issues of race without beating the audience over the head with a message. All four characters are likable and clearly have their flaws.

Steve Hendrickson and Sally Wingert play the Butleys. He is a high-strung government agency employee who loves his garden dearly and she is a fierce defense contractor. Hendrickson and Wingert easily portray the Washington area couple that so many in the audience know. Both actors are strong and have electric energy on the stage.

The Del Valles are played by Dan Domingues and Jacqueline Correa. Domingues is a dashing and delightful actor who easily flips from being a shark of a lawyer to a gentle husband and soon-to-be father. Correa’s character is a bit of a social justice warrior when it comes to native gardens and she too has incredibly powerful energy on stage. Both couples have a lovely chemistry.

The cast is rounded out with Guadalupe Campos, Oscar Ceville, Javier del Pilar, and Christopher Rios as supplemental actors. These four actors added a simple yet humorous element to the play and were very fun to watch. Their reactions to what was happening on stage became a mirror for the audience.

Blake Robison directed this play with quick comedic timing and utter sweetness. He directed the world premiere of “Native Gardens” at the Cincinnati Playhouse where Robison is currently the Artistic Director having been in that same role at Round House Theatre until 2012.

Kara Harmon designed wonderful costumes that truly one sees every day walking down the streets of DC. Tania was dressed either in simple outdoor work clothes or cute dresses while Pablo was always in a well-tailored suit. Frank wore bright colored button-down shirts and sweaters and Virginia was almost always in a power suit.

Xavier Pierce designed the lights marvelously and seemingly simply. It is a good mark in a lighting designer when the lights are not distracting to the audience.

Sound designer Scott W. Edwards had a wonderful design and the incidental music was also a cheerful highlight of the show.

This play has deep roots in DC. Zacarías also added in extra jokes about the People’s Republic of Takoma Park, the Washington Post, and more just for local audiences that aren’t included in the regular script. Not only that, but it was great to see a show set in Washington that didn’t surround the White House or people in power. Change happens with rest of us before it makes its way into the government. It is also those of us in the backyards of DC, and the rest of America, that are really living out the realities that “Native Gardens” focuses on.