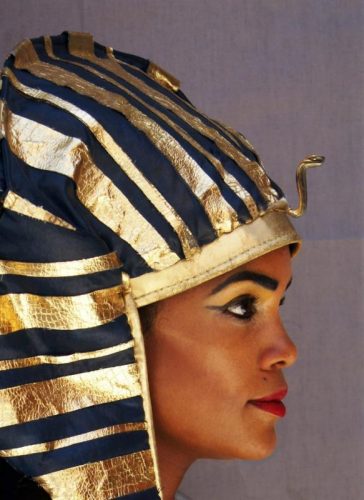 Step aside Cleopatra. Behold Hatshepsut, ancient Egypt’s first and only female king. Although her successor attempted to erase the history of this unprecedented pharaoh through desecration of her monuments and more, Hatshepsut’s legacy is resurrected in “PHARAOH: The Female King of Egypt.” Written by Washington D.C. native Tim Hogan, this is no dry excerpt from Encyclopedia Britannica. On the contrary, this one-woman show supported by a talented group of actors and dancers utilizes the time-honored African-American tradition of storytelling to paint lively, memorable pictures of history, a history that seems strangely relevant today.

…[T]his one-woman show supported by a talented group of actors and dancers utilizes the time-honored African-American tradition of storytelling to paint lively, memorable pictures of history, a history that seems strangely relevant today.

Michal Roxie Johnson wielded dual strengths in this show as director and as Hatshepsut, telling the tale from Hatshepsut’s beginning as Thutmose II’s queen to her rise to Pharaoh after his death and all the dangers and betrayals such power welcomes. Johnson brought her own apparent beauty to the title role, deliberately contradicting ancient depictions of Hatshepsut as mannish. She floated about with a regal grace, yet possessed a fierce anger and frightening strength that reminded all in her presence just who was in charge. As she transitioned into several characters, Johnson displayed wonderful articulation in her delivery of this deliciously rich text but came off as more oratorical at the play’s beginning. As her character evolved in power, however, Johnson became more embodied with her multiple characters, some humorously snotty rivals, others achingly bitter enemies.

A delightful supporting cast perfectly underscored Johnson’s carriage of the show. Malcolm Anomnachi as Hatshepsut’s successor and stepson, Thutmose III brought a presence like dynamite onto the stage as he thrust his fierce disdain for Hatshepsut’s leadership against her icily calm resolve. Dorian Christian’s portrayals as the scribe and Hyksos slave were refreshingly distinct in characterization which effectively illustrated just how deeply Hatshepsut was revered, feared, and hated. Dancers Monika Anderson and Christine Jenkins created splendidly skillful visual imagery with their bodies that visually interpreted the emotional ebbs and flows of the story, thanks to Mari Andrea Travis’ fresh modern dance choreography.

With additional direction from assistant director Walter Slowe, the technical simplicity of this production was simply perfect. Set designer Reese Siedlecki and costume designers Sally Maddox and Tia Harris crafted an adoringly beautiful framework for storytelling with set, costumes, and props that were refined, minimalistic, and authentic to the ancient era. A contemporary soundtrack that wafted throughout the night was an unexpected and fitting bonus, featuring selected R&B/Soul artists and Queen Latifah – need I say more?

Tim Hogan’s “PHARAOH…” has a remarkably timeless quality, in which it portrays an ancient story that reflects an ongoing social (and political) issue: resistance toward women in power. Hogan artfully gives voice to a powerful woman that her successor aimed to silence.

Running Time: One hour and 50 minutes with a 15-minute intermission