Theatre Review: ‘Shiloh Rules’ at The Colonial Players of Annapolis 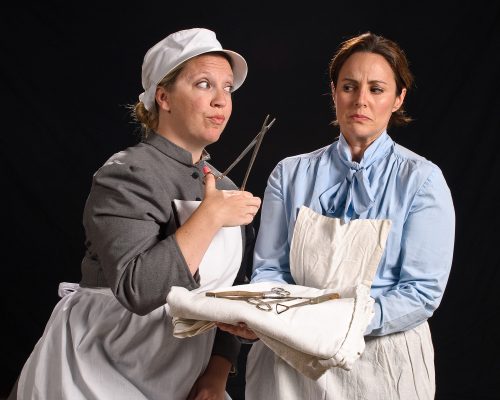 Jamie Erin Miller (right) as Clara May Abott and Laura Ivey (left) as Meg Barton in ‘Shiloh Rules’ at The Colonial Players.

Just within the past month, conversations surrounding the Civil War, specifically how we remember it, have been growing more prevalent and heated. Doris Baizley’s 2006 comedy “Shiloh Rules” deals with through the eyes of female Civil War reenactors. What is the intention behind our reverent actions, even if it is just pretend, and what can we do to heal hate?

Theatre in the round is one of the most difficult things for directors and designers but the production team did a lovely job of making it work.

Cecilia Delaunay Pettison (Meg Venton) is a proper Southern lady turned refugee when she had to flee her home. She is hiding out near Shiloh in hopes of finding a means to be useful and to hear word from her husband who is in battle. With her is a girl named LucyGale Scruggs (Carrie Brady) who is new to reenacting and wants to join the battle. Cecilia is a famous reenactor who takes the job maybe a bit too seriously and no one knows who she is in real life.

Clara May Abbott (Jamie Erin Miller) is a Union nurse who gets a little too into the authenticity of medical practices of 1862. She is training Meg Barton (Laura Ivey) who is really just a student failing nursing school. Clara teaches Meg about what to do on the field but also encourages her to take charge of her role and find power in who she is.

They are joined by the Widow Beckwith (Shannon Benil) who doesn’t take sides in the war and is just there selling her wares. She is also in charge of the Authenticity Committee. All of them are challenged by Ranger Wilson (Ashley Spooner), an African-American National Park Service Ranger who is just trying to lay down the rules.

It is wonderfully refreshing to see a play with an all-female cast and the plot not focusing on men. We see them all in their respective roles as individuals and powerful ones at that. These women each grow and learn in beautiful ways.

Each of these actors held their own on the stage. Venton absolutely brought us back to a time of sipping lemonade on plantation porches. She was grace and charm at all times while Miller was just as uptight as one would expect from a high-ranking Union nurse. Brady was rambunctious and eager, while Ivey was weary and exhausted. Benil had good comedic timing and balanced the rest of the reenactors well. Spooner raised the stakes for the entire situation and brought some down to earth humor to the plot.

Beth Terranova directed as well as designed the set and costumes, alongside Jeannie Christie. The lighting, designed by Alex Brady, achieved that ever so difficult goal of not being noticed until the proper moment. Theatre in the round is one of the most difficult things for directors and designers but the production team did a lovely job of making it work.

We can say that things are different in our country than they were in 1862, and that it is okay to reenact these things because we are so far removed. Ranger Wilson reminds us “Doesn’t matter if the hate is still the same.” The reenactment of the Battle of Shiloh definitely had its own rules, Shiloh Rules, and it was worse than any of the women imagined. Yet again Ranger Wilson steps in with the outsider’s perspective. “This is just a taste,” she tells the other women. The real battle, one of the bloodiest of the entire war, was far worse than their dramatic game of pretend. In the end, it isn’t about sides, it is about standing up for each other.

“Shiloh Rules” runs at The Colonial Players of Annapolis through October 1. For tickets and more information click here.