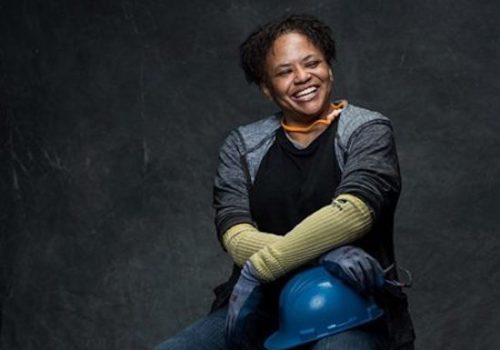 Dominique Morrisseau began writing “Skeleton Crew” when she met a woman who was living in her car in the parking lot of a hotel in her hometown of Detroit. She remembers being devastated, “This is a city of people who make cars. How did we become a city of people living in their cars?” What came from that encounter is one of the most evocative pieces of theatre of our generation.

Set in the last auto-stamping factory in Detroit in 2008, the play centers around four African-American employees of the small company who have to deal with the rumors of an impending shutdown. While younger employees Shanita and Dez worry about how a potential shutdown would affect their future, Faye the most senior employee feels a deeper connection to the past and the work that she put into this company and love she had-and lost- in her life. Throughout the play, each character fears for the life that they’ve built. Each character is fully rendered and the audience comes away with the feeling that they’ve known them their whole lives.

…takes us beyond and within ourselves in ways we never thought possible. It’s simply unmissable.

This D.C. Premiere is directed by Patricia McGregor who the New York Times has profiled twice for her direction of world premieres. Her work includes “Ugly Lies the Bone” at the Roundabout Theatre “brownsville song: b side for tray” and the 24 Hour Plays on Broadway where she directed Paul Bettany, Tracy Morgan and Sarah Silverman. She assembles a cast and crew of incredible theatre artists.

“Tough as bricks” Faye who refers to the break room as her own personal break room is played by D.C. actress Caroline Stefanie Clay. She was seen recently on Broadway in Lillian Hellman’s “The Little Foxes” and Folger Theatre’s “A Midsummer Night’s Dream.” There’s no way to overstate it- Clay’s performance is nothing short of a tour de force. Every moment she is on stage is like a glimpse into the life of a living breathing human being, someone that the audience comes to know and understand in a such an incredible way.

Fresh from the Baltimore Center Stage’s production of “Jazz”, Jason Bowen delights as Dez, the disarmingly charming jokester of the stamping factory, who dreams of owning his own garage. Bowen masterfully conjures every nuance of the character of Dez. His speech where he proclaims that Reggie has formed his opinion of him “it’s not my job to convince you otherwise” is one of the most powerful speeches I’ve ever seen in any play.

Shannon Dorsey returns to the Studio Theatre after her successful turn in Wooly Mammoth’s “An Octoroon.” She plays the pregnant, no nonsense Shanita. Dorsey shows her comedy chops in describing Shanita’s hormonal outbursts and in her deprecation of Dez’s flirting. But it’s in the scenes where she describes her desire to be “like her father” and “build something that will take someone somewhere” where her performance is especially poignant.

Tyee Tilghman excels as the straight-laced Reggie, the foreman of the stamping factory. Tilghman’s Reggie fights a similar battle as Dez in dealing with perceptions that are placed on him as an African-American man. His speech where he explains to Faye how he “walks the line” and “no one is safe” is remarkable.

The set is the exquisitely detailed break room of the car stamping factory designed by Tim Brown who recently designed the sets for J. Cole’s For Your Eyez Only tour. Sparks fly from car doors in an actual assembly line that symbolically disappears over time.

The costumes are complete with the wear and tear of an industrial worker’s daily work. They are impressively designed by Marci Rodgers who recently designed “She’s Gotta Have It,” Spike Lee’s new Netflix project. Broadway Lighting Designer Nancy Shertler lends her talents to the Studio stage once again, having last been seen in “The Habit of Art”. From the opening fluorescent lights to the soft mystical spots on Faye between scenes, Shertler masterfully blends this world that is a marriage between industrial and spiritual.

In an interview for the Interval, Dominique Morrisseau described her writing process and the way that “communities have a poetry to the way that they speak.” Studio Theatre is a D.C. staple because it understands D.C.’s community longs for that connection of poetry in speech. This play gives us that connection and takes us beyond and within ourselves in ways we never thought possible. It’s simply unmissable.

Running Time: Approximately 2 hours and 5 minutes with one 15-minute intermission.