Theatre Review: ‘Stones in His Pockets’ at Keegan Theatre 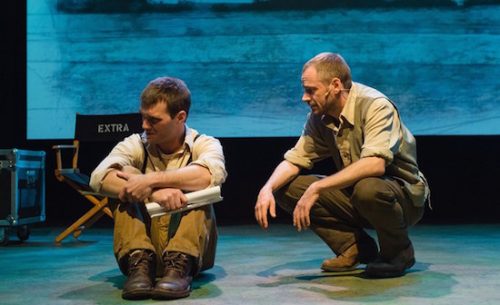 Josh Sticklin and Matthew Keenan in Stones in His Pockets at Keegan Theatre. Photo by Cameron Whitman.

Tucked away in the heart of America’s capital is a little slice of the Emerald Isle known as the Keegan Theatre. This theatre is so connected to their Irish roots, in fact that they have put it in their mission statement that they will produce one Irish play a year. And so, they start their 21st season with a jaunty little Irish tragicomedy – “Stones in His Pockets” by Marie Jones.

Charlie Conlon and Jake Quinn are two young men from the County Kerry.  Not able to get much work, after Charlie’s video renting business falls through and Jake comes home from America, they become extras on Hollywood’s latest Ireland inspired romantic epic. Together they bask in the minimal Hollywood glow that being extras affords them until one of the young men from the town takes drastic measures because he was not allowed to be an extra in the film.

Sometimes it’s the simplest and the realist stories that are the most truthful and beautiful.

Abigail Isaac Fine returns to the Keegan stage to direct this two-hander.  Even though the play only has two actors, they play multiple different roles of various ages, genders and histories. This calls for extreme acting chops, and Keegan Theatre did not disappoint.

Charlie Conlon, a smooth operator who dreams of producing his own script, is played by Keegan veteran Josh Sticklin last seen in the world premiere of “Mack, Beth” and Keegan’s award-winning “American Idiot.” Stricklin is a chameleon, becoming whole new characters with just the smallest adjustment to his physicality and his voice. His Caroline Giovanni, the movie star, is delightful, and his Finn, the best friend of the young man who takes drastic measures, is incredibly moving.

Jake Quinn, the realistic rougher around the edges young man, is played by none other than Keegan’s master of set design, Matthew Keenan.  Born and raised in Dublin, Ireland, Keenan adds nuance to his archetypal characters. His Production Assistant and Mickey, the last living extra on “The Quiet Man” are a joy to watch. His Sean Harkin is heartbreaking. Keenan is also a playwright whose Christmas tradition “An Irish Carol,” opening in December, is a Keegan favorite!

In a play that put such an emphasis on the two characters, the technical aspects had to be subtle but purposeful. Sound Designer Dan Deiter manipulated the voices of the characters to show that they are speaking through different mediums, even though the movie equipment was mostly mimed. Nitya Ramlogan’s simple costume design put the emphasis on Stricklin’s and Quinn’s physicalities.

G. Ryan Smith, who recently co-designed Rorschach’s enchanting played based on Neil Gaiman’s book “Neverwhere” along with Keegan’s “Big Fish,” “Next to Normal” and “American Idiot” designed the projections, which served as a backdrop, but also as a subtle hint into the interior worlds of the characters.

The play began in an Irish regional theatre company Dubbeljoint Theatre Company and went on to win two Laurence Olivier Awards, but its message is for the common folk. Sometimes it’s the simplest and the realist stories that are the most truthful and beautiful. Good man y’rself, Keegan!

Running Time: One hour and 45 minutes, with one 15-intermission.

“Stones in His Pockets” will run from September 23rd to October 15th. For tickets and more information click here.