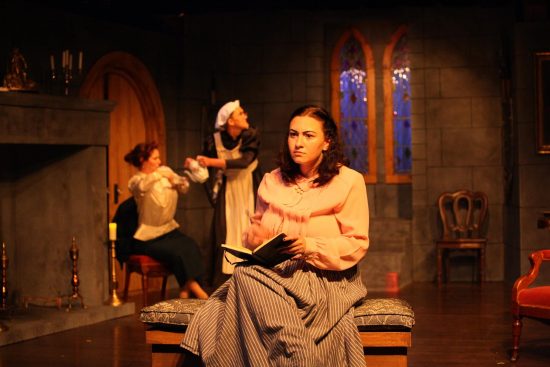 Virginia (Areya Campbell-Rosen) ponders her new home’s ghost while her mother (Amanda Wesley) tries to get a cup of tea from the housekeeper, Mrs. Umney (Corrie Bolcik). Photo provided by Montgomery Playhouse.

When the air starts to get a bit of a chill to it, thoughts always turn to spooky stories. Some of these stories can be a little too scary for everybody, but luckily the Montgomery Playhouse’s production of Oscar Wilde’s “The Canterville Ghost” is indeed spooky, but also funny and fun.

If you’re looking for a fun evening of light scares and big laughs, I recommend checking out “The Canterville Ghost” …

Adapted for the stage by Marisha Chamberlain, “The Canterville Ghost” opens with an introduction from Oscar Wilde himself (Dino Coppa), introducing his story. The plot centers on Virginia Otis (Areya Campbell-Rosen), a plucky young American woman who moves to England with her adventurous family. Her father, no-nonsense professor Hiram B.Otis (John Van Eck), buys Canterville Chase, an ancient estate from Lord Canterville (Kyle Tirak) who is at the end of his rope, due to the ghost haunting his family home. He explains to the professor what he and his family are in for, but is astounded when Professor Otis actually wants to pay MORE for the house after being told it is haunted. Hiram, Virginia, and the rest of the Otis family (Amanda Wesley, Isabel Miller, and Victoria Sova) move in and meet their excitable housekeeper Mrs. Umney (Corrie Bolcik) their charming young neighbor the Duke of Cheshire (Mo Shokoohi) and before too long, the ghost himself (Dino Coppa)!

While most of the Otis family delights in tormenting the increasingly bewildered and annoyed ghost, only Virginia feels some sympathy for the spirit. She notices a poem in the house: “When a golden girl can win/prayer from out the lips of sin/when the barren almond bears and a little child gives away its tears/then shall all the house be still/and peace come to Canterville.” Could this clue help Virginia banish the ghost once and for all?

“The Canterville Ghost” has been adapted multiple times, several times for film and television. It’s a story that still resonates with people over 100 years after it was written and the Montgomery Playhouse has produced a charmingly comedic, yet still spine-tingling version of this classic ghost story. Coppa provides tons of laughs as the beleaguered Canterville ghost, while also having some moments of real poignancy with Virginia. Campbell-Rosen is delightful as Virginia, giving her a bubbly optimism and stubborn independence. Bolcik’s physical performance adds to the comedy and Van Eck shines as Professor Otis. Tirak and Shokoohi deliver strong supporting performances and Wesley, Miller, and Sova round out a strong cast.

I’ve seen several productions at the Arts Barn and was astounded by the transformation that set designer David Jones was able to create. The stage was completely transported into an old-fashioned manor, complete with candelabras, secret passages, and even a suit of armor. The sound and lighting design were also quite impressive, creating realistic thunderstorms to enhance the spooky atmosphere (sound design – Matthew Ratz, lighting design – Steve Deming.) Doing costumes for a period piece is never easy, but Stephanie Yee and Erica Arnold did an excellent job. Producer David Jones and Director Naomi Ratz should be commended for creating an enjoyable production that hits the right notes of scares and laughs.

If you’re looking for a fun evening of light scares and big laughs, I recommend checking out “The Canterville Ghost,” before it departs for the other side.

Advisory: Due to some scares and mentions of murder, this show is recommended for audiences 7 and older.

“The Canterville Ghost” is now playing through October 1st at the Gaithersburg Arts Barn.  For more information on tickets, click here.