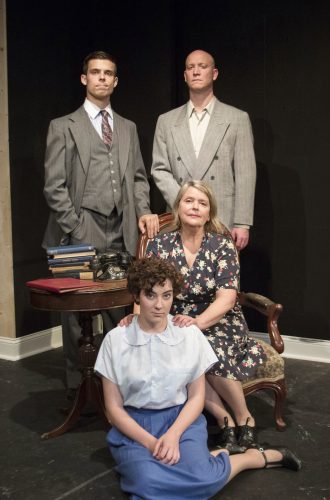 Directed by Michael Byrne Zemarel, the Vagabond Players in Baltimore is currently presenting a captivating production of “The Glass Menagerie” by Tennessee Williams.

This memory play is based on Tom’s recollection of his mother Amanda and his sister Laura. Tom, who serves as the narrator and protagonist, informs the audience that what they see may not be exactly what happened: “Yes, I have tricks in my pocket, I have things up my sleeve. But I am the opposite of a stage magician. He gives you illusion that has the appearance of truth. I give you truth in the pleasant disguise of illusion.”

Lynda McClary is incredible as Amanda Wingfield, a single parent struggling to raise two children.  The stress of financial woes can be seen in her eyes and forehead, as well as the hope that she has for her children to one day have the comforts of life that she once had in her youth.

It is up to Amanda’s son, Tom to work in a shoe warehouse in order to provide for the family since the father abandoned the family. Don Kammann embodies the role as Tom, a man who longs to be a poet and not be burdened by having to be a provider. What I like best about Kammann’s performance is his pacing of the dialog, allowing for Tennessee Williams and his genius script to come to life on the stage.

Tom’s older sister Laura, played by a captivating Anna Steuerman, is fragile and unique like her prized unicorn glass figurine.  Her entire collection of glass figurines is her way of escaping the world like how Tom escapes by going to movies and bars. What makes her performance stand out is how Anna Steuerman reacts to the performers around her, especially Flynn Harne who plays the role of Jim O’Connor.

Flynn Harne is strong as Jim O’Conner who shows a character who tries to help Laura get past her esteem issues while having secrets of his own.  Understanding the difference between disappointment and simply being discouraged.  He understands that from his own experiences from being a star in high school to not meeting what he considered life’s expectations.  The connection Jim makes with Laura helps her open up with others, something Laura had yet to do with her limited interactions. Anna Steuerman’s sensitive presentation of Laura’s physical challenges enable her character to get more empathy and an understanding of her fear of rejection.  The motivation she received from Jim, although not a completely satisfying result can be viewed as the beginning steps to a new life.

The collection of glass ornaments by Laura which Amanda calls her Glass Menagerie, is something she takes pride in.  The question posed in Laura’s emotional exchange with Jim is what will people truly notice about you.  What makes you different from everyone else?  Not the physical or financial elements of your existence, but ask yourself what others will truly see when you give them the opportunity.  Questions asked within Tom are what is needed for your own self growth.   The needs for yourself may never meet the needs of those who need in their own daily routine.   Amanda sees her own life in review from her relationships with gentlemen callers and that with her own family.

“The Glass Menagerie” presents as many questions to the audience as it does for the members of the cast.   Any show that provides the audience a chance to look outside their own glass window is an opportunity to be taken.

“The Glass Menagerie” runs thru October 1, 2017 at the Vagabond Theatre in Baltimore. For more information, visit here.