Theatre Review: ‘The Hound of the Baskervilles’ at Port Tobacco Players 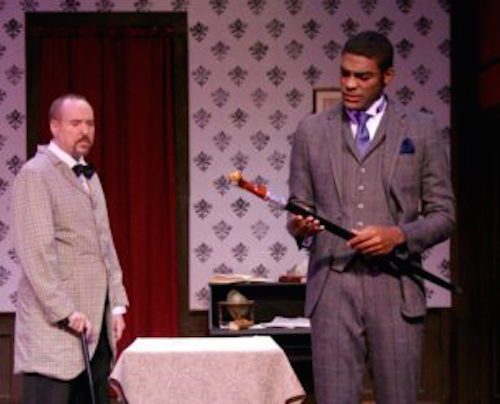 “It’s Elementary, my dear Watson” is perhaps one of the most well known lines in English Literature, and its speaker is most definitely a well-beloved detective across continents. Many a child has dressed up as the infamous detective Sherlock Holmes and attempted to solve the mysteries that plague our everyday life. Well, for all of you want-to-be detectives, here is a mystery that is certain to catch your eye (and plague your mind).

The Port Tobacco Players in La Plata, Maryland has welcomed this world-renowned detective onto their stage as they perform “The Hound of The Baskervilles” by F. Andrew Leslie. Yes, Mr. Holmes is in the theatre, Fridays – Sunday for the next two weeks, and this is a story straight out of the mire.  Directed by Keith Linville, assistant directed by Hannah Gilley, and produced by Debbie Gilley, this production holds true to the Arthur Conan Doyle style.

“….a good balance of intrigue, comedy, and clever verse; along with a riveting mystery that will leave you on the edge of your seat….”

From the opening music and dimming of lights, Port Tobacco Players (PTP) draws the audience into the English countryside where Sherlock Holmes (played exquisitely by Charles Watley) and his assistant, Dr. Watson (portrayed by Robbie Jones, who stepped into the role 2 weeks before opening night!) are trying to solve a small mystery regarding a walking cane left outside of their apartment in London, England. It is clear that Holmes is entertained by Watson’s deductions, and then he solves the case in moments. The genius that is Sherlock Holmes has only begun to be displayed as the plot moves forward to introduce Dr. Mortimer (portrayed cleverly by Kenneth L. Waters), a physician and trusted friend of Sir Henry Baskerville (played hilariously by Chad Mildenstein), who presents Holmes and Watson with a mysterious legend of the demon hound that plagues the moor outside of Baskerville Mansion. Legend says that years ago, a Baskerville was killed by the monster, and since then the Baskerville family has been plagued with horrid and mysterious deaths.

As the story continues, the audience finds themselves in the midst of Baskerville Mansion, surrounded by the moor. The lights (designed by Leslie Wanko) and music (composed excellently by James D. Watson) give grand illusion to the mood and mystery of the moor, while the set cleverly peels away from Holmes apartment to the Baskerville Mansion. A new set of characters are introduced; John Stapleton (portrayed with expertise and ease by Tym LaBelle), Mr. Barrymore (portrayed mysteriously by David Ludy), and Laura Lyons (portrayed beautifully by Melody Bishop), just to name a few. The plot thickens quickly as there are signals spotted, butterflies netted, and a thin stranger noted wandering the moor.

The story does drag a bit, as the dialogue is a mouthful and some scene changes leave the audience sitting in the dark (literally). However, the main actors do an excellent job of leaving you wanting more! Mildenstein, La Belle, and Watley do a marvelous job of not only portraying their respective characters but quite literally became them! Melody Bishop shines as Mrs. Laura Lyons, capturing the stage from the moment she enters to the moment she leaves. This is an excellent show to bring in some new acquaintances with Sherlock Holmes, as the story leaves the details of the murders to that of the audience’s imagination. Port Tobacco Player’s “The Hound of the Baskervilles” is a good balance of intrigue, comedy, and clever verse; along with a riveting mystery that will leave you on the edge of your seat.

Running Time:  Approximately 2 hours and 45 minutes, with a 15-minute intermission.

Advisory: This play is best suited for audiences in middle school and up, due to the brilliant use of words by the playwright that may leave young viewers mystified and confused and the appearance of brandy and smoking in a few of the scenes.

“The Hound of the Baskervilles” will be playing at Port Tobacco Players in La Plata, MD until October 8th, 2017. For more information, or to purchase tickets, please look online.