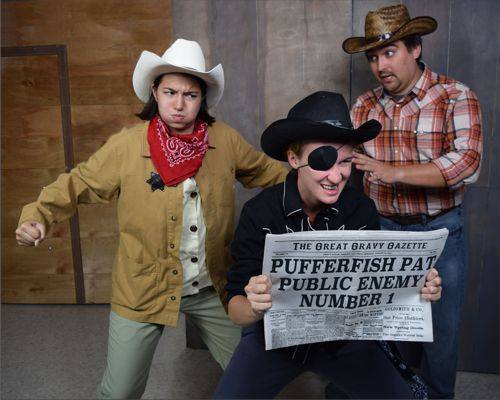 It’s a beautiful fall day in Montgomery County when many potential audience members are probably outside enjoying the weather. But those inside the Montgomery College Cultural Arts Center watching “The Legend of Pufferfish Pat: A Tall Tale for Mad Times,” as presented by the InterAct Story Theatre, are vocally enthusiastic.

That includes both the children and family members accompanying them.

InterAct Story Theatre is a nonprofit educational performing company that has been dedicated to promoting learning and growth through the arts in existence since 1981.

“Pufferfish Pat” is charming and funny with versatile actors…

Set in the fictional town of Gravy Gulch, known for its Great Gravy Cook-off and Fashion Festival, the 50-minute play tells the story of Pat, the town sheriff, who can control just about everything in the town except his own temper. Even being called “Pufferfish” by his one-time friend sets him off.

The skeletal cast of three actors portray many different characters of both genders and different temperaments.

Alex Miletich IV plays Cookie, the town’s cook, as well as the female Mayor, Ma Murchison. Kelsey Yudice is one of two circus performers and holds the title role of as well, while Elle Marie Sullivan is the other circus performer, a sweet towns lady, and the play’s villain/victim. Miletich displays broad humor and a thick Western accent as Cookie, but also a perfectly believable smart and gentle Mayor who happens to share the actor’s beard. Sullivan is funny as the (Italian, is it?) circus performer Tony, but, with his hip thrust forward and back hunched over, compelling as the menacing, yet physically and emotionally wounded One-eyed Jack.

Yudice is fine as Larry Zaba, Tony’s non-look-alike brother, but totally occupies the skin of the complex sheriff with the trigger temper. She isn’t playing him; she is him.

But because this is interactive theater, as its name states, the audience collectively becomes one more character, representing all the cowpokes and townsfolks of Gravy Gulch. They get to contribute sound effects and repeat song lyrics, at the least.

Even before the performance, the audience is invited to play a part. Staff members go around asking them – both kids and adults — what they do to handle anger. The actors then integrate some of the answers into the script on the spur of the moment.

A kit for parents and educators includes resources about the lesson of the day, which is, of course, how to control one’s temper. The theater program also offers ideas for discussions and activities after the show, which is followed by a talkback.

“Pufferfish Pat” is charming and funny with versatile actors – if a bit heavy-handed with its message (as plays for children tend to be). On the other hand, it is mostly nonmusical, as opposed to many children’s shows, and the set and props are wonderfully simple so kids really focus on the plot and characters.

I wasn’t sure if the inclusion of a one-eyed character might not frighten the younger children, but then again, they deal with Captain Hook.

Ali Oliver-Krueger wrote the script and directed. Peter Oliver-Krueger is the technical director/set designer. Rachel Frederick and Andrew Schewe designed the costumes, and Chris Campanella did the lighting design.

“The Legend of Pufferfish Pat” runs Fridays through Sundays, through September 23 at the cultural arts center, 7995 Georgia Avenue, in downtown Silver Spring. But it’s public and accessible entrance is located off Georgia Avenue and on King Street, across from the Holy Cross Clinic.

InterAct Story Theatre performances also can be adapted for a wide variety of venues, including libraries, museums, community centers, arts centers and festivals.

This production is supported in part by a grant from the Maryland State Arts Council and by the Arts and Humanities Council, and other donors.

Season 3 of the InterAct Story Theatre Wheaton Family Theatre Series begins October 21 with the world premiere of “The Town That Cried Avalanche.” It will take place at Highland Elementary School.

“The Legend of Pufferfish Pat: A Tall Tale for Mad Times” plays through September 23, 2017, at InterAct Story Theatre— currently in Theatre II of the Cultural Arts Center on the Montgomery College Campus located at 7995 Georgia Avenue in downtown Silver Spring, MD. Tickets are available at the door or in advance online.