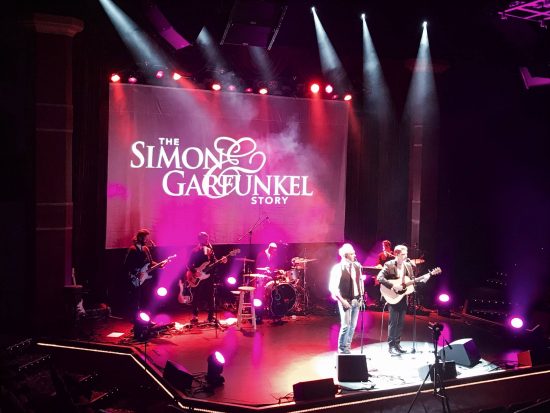 The cast of “The Simon and Garfunkel Story.” Photo courtesy of their official Facebook page.

Arguably the voice of a generation, Paul Simon and Art Garfunkel made melodies that helped define the face of folk music in America. With mega-hits like “The Sounds of Silence,” “Mrs. Robinson,” and “Homeward Bound,” the duo captivated the music scene of the 1960s. Director Dean Elliott has brought together a unique and captivating concert style show that celebrates the history, music, and legacy of Simon and Garfunkel.

The stage layout gave the audience a hint at the immersive experience they were in for, with a huge screen at the center. The show began with clips from the 1960s to set the mood, with the impressive lighting coming up on three risers with musicians. Then Taylor Bloom and Ryan M. Hunt came to the stage, as Simon and Garfunkel, in their early 60s look of clean cut white button down shirts and ties. They would change outfits a few times throughout the show to reflect the duo’s evolving style. The show began with one of their most iconic and recognizable songs:”The Sounds of Silence” from their album of the same name. The lighting was dynamic and the screen played a mixture of views of New York city and comical cartoon versions of Simon and Garfunkel. As impressive as the visuals were, the sound was the star. Bloom and Hunt’s voices not only blended into sumptuous harmonies, but they sounded so much like the show’s namesakes that it was uncanny. While the men performed Simon and Garfunkel’s music, they didn’t pretend to be them – they acted as our hosts on the journey through the duo’s music.

…a fantastic way to introduce someone to this beautiful and influential music.

The show provided a great balance of the well known songs and some of the lesser known ones. There was also a great blend of music and information, much of which I didn’t know, even as a fan. One example was the early influence of the Everly Brothers on their music, and their start as “Tom and Jerry.” Bloom did double duty as “Paul,” singing and playing acoustic guitar with grace and skill. For me, his stand out performances were his vocals and incredible guitar work on “Bleecker Street, “Homeward Bound,” and my personal favorite of the Simon and Garfunkel oeuvre, “The Only Living Boy in New York.” Hunt impressed as “Art” with his performance of “For Emily, Wherever I May Find Her,” a killer whistle solo on “Bookends,” and an encore rendition of “Bridge Over Troubled Water” that brought the house down.

They were not alone; their band also gave impressive performances as well. Evan Jay Newman (Music Director/Keyboards) killed “Baby Driver” and expertly managed all of the music in the show. Matt Baldoni shredded on electric guitar on “Keep the Customer Satisfied” and “Hazy Shade of Winter,” while bassist Randy McStein rocked “America” and “Fakin’ It.” Rounding out the ensemble was Bob Sale on drums, showing his diverse skills on the drum set for “Late in the Evening” and the bongos on “Patterns.” The entire band stood out during a cool transitional moment toward the end of the show, to fill between the performance of Simon and Garfunkel’s last album together and the unforgettable concert in Central Park. They performed an instrumental medley of some of Paul Simon’s most recognizable solo efforts, which consisted of samples from “50 Ways to Leave Your Lover,” “You Can Call Me Al,” and “Me and Julio Down by the Schoolyard.” The concert concluded with a stirring rendition of the massive hit “The Boxer.”

“The Simon and Garfunkel Story” was musical fun for S&G mega-fans and novices alike. The pace of the show was perfectly metered and it was incredibly enjoyable. It had all of the classics for the casual fan, mixed with some more obscure pieces to bring dimension. As a fan of Simon and Garfunkel’s music, the show was a transporting experience; fully immersive with music and visuals. The two leads also made charming hosts, making the historical information presented about the duo interesting and accessible. Because of the nature of the show and the journey through Simon and Garfunkel’s catalogue, this would also be a fantastic way to introduce someone to this beautiful and influential music. If you have a chance to catch this unique show while it is touring the US, I highly recommend that you check it out.

Running Time: Aapproximately 2 hours and 15 minutes with one 20 minute intermission. You can find more information about upcoming performances here.

While “The Simon and Garfunkel Story” was just a one night engagement at the lovely Strathmore Music Center, you can find more information about high-quality upcoming entertainment at Strathmore here.