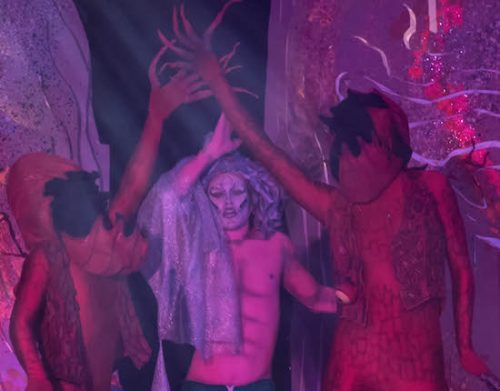 Checking out Baltimore Rock Opera’s (BROS) website with a number counter of a how many pizza slices a man is eating, how many Natty Boh’s beer cans being crushed and how many induced head bangs are in a day, I expected a true rock-n-roll show. And that is definitely what I got!

Bros’ “The Terrible Secret of Lunastus” has, thanks to the band Magnetaur, a bass loud enough I felt the beat thrum through the floor and radiate out my body, and guitars fast enough to do Angus Young proud. The band members are: John “Doozer” DeCampos and Johnathon “Smelly” Smeltzer on guitar, Tyler “Dirty” Merchant on Bass, Dominic “Fixins” Cerquetti and Erica “Bagels” Patoka on Keys, Jason”Jay-son” Farrell on drums, Patrick “P-Bone” Staso on Trombone, Moira Goldie Horowitz and Dusty Peterson as Pit Singer, and John De Campos and Erica Patoka as Music Co-Directors (Patoka is also the vocal director). Yes, I want to name each one of these band members, they were all that good!

BROS is distinctive, fun and unpredictable and that is what the Greater Baltimore theatre scene needs!

The premise of Lunastus is this… “The Moon is falling from orbit and on the eve of the Earth’s destruction four astronauts, accompanied by their robot, Android, depart for the planet Lunastus to assess its suitability as a new home for the human race. The creatures they discover there will make them question their free will… and fear for their lives.”

That’s the setup, but there is so much more. First, there is dancing… As the four astronauts and a clever robot land on Lunastus, all is not well on this alien planet. The first thing the astronauts run into is a forest of red spooky trees. These “Nog” trees (Amanda Boutwell, Greg Bowen, Morgan Moses-Allen, Marvin Roxas and Sarah Smith) come alive with evil and malice in a dance choreographed impressively by Erin Reid.

Then there are the songs… Songs that tell the story, sung by the cast and played to perfection by the band. My favorite song was “Nocturnal Emotions,” sung by Ionos (Corey Hennessey – who is fantastic and my favorite character in the show). The title song, “To Lunastus,” was sweet and a great way to introduce the main characters. Kerry Brady as Vera really shines in this song. Her voice comes through loud and clear, and throughout the show, she never brakes character and was a very convincing as a Russian cosmonaut.

Next, scenery and costumes – Set Co-Designers Joey “Twoplaids” Martin and Michael Vincent Bull designed a set that had spaceship walls on one side and Lunastus’ cave walls on the other and large Space stones that glowed from within throughout carved wave like ruts. Costume Co-Designers, Jacob Dillow (designed the aliens) and Kat Zotti (designed the humans) brought a cohesiveness to the show, inspired perhaps from classic TV series like “Star Trek” and “Space: 1999.”

I don’t want to forget the projections that arch above the stage and propels the audience through space, shows us the news headlines and sets the mood for many of the scenes. Projections Designers, Tim Brosius and Chuck Green did a great job.

I think another part of this show that is worth noting is the immense amount of volunteers pitching in for this show. Pages and pages of the program are dedicated to name after name of people doing everything from props (30 people are listed!) to the front of house team (31!). Baltimore Rock Opera Society is doing a bunch of something’s right to have this much dedication to the BROS mission. Read my interview with Artistic Director Aran Keating here to find out more about BROS and their fundraising campaign.

I might be a few years older than most of the people in BROS society, but I thoroughly enjoyed my evening in “Lunastus.” BROS is distinctive, fun and unpredictable and that is what the Greater Baltimore theatre scene needs!

Advisory: Loud music, use of smoke and unrestrained enjoyment.

“The Terrible Secret of Lunastus” runs through October 5, 2017, click here for tickets.