Theatre Review: ‘The Wizard of Hip’ at MetroStage 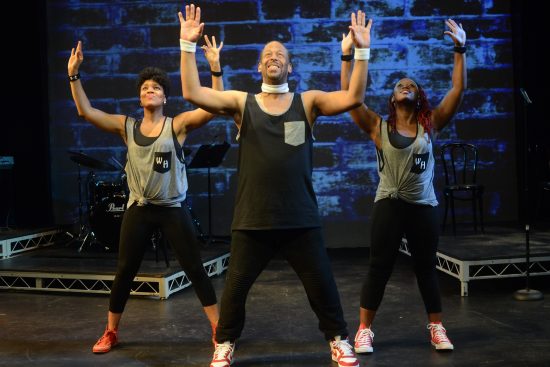 Thomas W. Jones II’s “The Wizard of Hip (or When in Doubt Slam Dunk)” has been around for nearly as long as I’ve lived, but age is an insignificant number. Hip is the life measurement we should all be striving for, no matter our age, and Jones shows exactly how that’s done.

Written, directed and choreographed by Jones, “The Wizard of Hip” follows Afro Jo (Jones) as he transitions from boyhood to adolescence to young adulthood in Queens, NY. Touching on topics ranging from the differences in parental scolding to embarrassing, but equally exciting sexual milestones, the play highlights the changing relationship dynamics and societal influences young African-American men face as they grow up. Originally produced as a one-man show, the current production at MetroStage in Alexandria, VA includes live music and singing. Both additions provide an extra jolt of energy to an already fast-paced, hilarious journey.

…the perfect combination of poetry, music, dance and vivid emotion.

The show starts off with the beats of Greg Holloway, the melody of William Knowles and the fantastic harmonizing of Lady Doo Wop 1, Jasmine Eileen Coles, and Lady Doo Wop 2, Kanysha Williams. As The Lady Doo Wops dance around, swinging their hips and admiring each other’s beauty, Afro Jo walks on stage to join them with a swagger that foreshadows the hilarious stories to come, both literally and figuratively.

Jones’ on-stage presence is absolutely mesmerizing. His energy appears endless as he constantly makes his way across, up, down and diagonally around the stage. While he emphasizes his new nickname, Wizard of Hip (Replacement), there’s no stiffness to be seen in any of his reinterpretations, whether of heated moments with an older college student or of Sidney Poitier’s dance off with Judy Geeson in “To Sir, with Love.”

With more than 200 performances under his belt, Jones showcases what a confident actor looks like on stage, fully embracing his character’s quirks, observations, and at-times, naiveté. What I found most entertaining was Jones’ courage to call audience members out on missed references and held-in belly laughs. His decision to go off-script, sitting on the edge of the stage as he spoke nonchalantly, surprised us as well as a few of his cast members.

As The Lady Doo Wops, Coles and Williams did a superb job at providing additional context to the furiously fast story line. Whether shaking their heads in disgust at Jo’s sexual desires or pretending to be annoyed, multitasking moms at various levels of “Mommy U,” they quickly adapted their demeanor to match characters present at the time and place Jo described. With help from Knowles and Holloway, the ladies made lightning bold nods to James Brown, Michael Jackson and more.

The abundance of onstage energy made up for the minimal stage design. All actors made brilliant use of the chairs and microphones available to them. Similarly, while the costumes only varied slightly between acts, I didn’t find them particularly necessary to comprehend who Afro Jo is a grown man, nor who he used to be.

From start to finish, “Wizard of Hip (or When in Doubt Slam Dunk)” keeps the audience’s attention focused on Afro Jo’s unapologetically honest transformation with the perfect combination of poetry, music, dance and vivid emotion.

Running Time: 1 hours and 50 minutes with a 10-minute intermission.

“The Wizard of Hip” plays until September 17, 2017, at MetroStage in Alexandria, VA. For more information or tickets, call 703-548-9044 or click here. The theatre is handicap accessible.