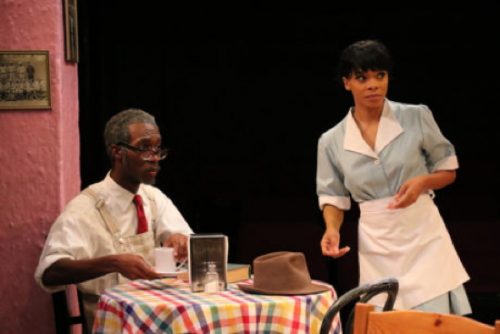 Hard times, born April 27, 1945, as Frederick August Kittel. A young black male growing up with an absent father in the Hill District of Pittsburgh, Pennsylvania during racial and economic strife was no easy ride. In honor of his mother, he took his mother’s maiden name and changed his name to August Wilson after his father’s death in 1965.  A life lived as a young black male disenfranchised by school, Wilson dropped out of high school in the tenth grade, but knowing he always wanted to be a writer, Wilson spent much of his time in his community writing in the cafes, bars and a cigar store. Wilson wrote extraordinary plays about the ordinary lives of African-American’s during the civil rights movement of the sixties to the mid-seventies.  Wilson best-known writings include his 10-play cycle on 20th-century Pittsburgh. The most famous play is “Fences,” recently shown on the big screen starring and directed by Denzel Washington and co-starring Viola Davis.

“Two Trains Running” is a “bird’s eye view” into a world often unseen or celebrated.

The Spotlighters Theatre in their 56 season is the perfect intimate space for August Wilson’s, “Two Trains Running” which opened Friday night. You can nearly reach out and touch the players, giving me the feeling that I was apart of and present to all the action. The stage is set as a cafe with a fountain counter, stools, simple menu hanging on the wall,  a jukebox, wooden tables and chairs, all old fashioned styled to serve its purpose, and well designed by stage floor artist (Fuzz Roark) and the talent of set design by (Alan Zemla). The actors well suited in costumes, thanks to costume design by House of Bankerd.

If you have ever wondered about the conversations behind closed doors, about the people who are talking freely like, “at home” in the African-American community, the talented ensemble of characters offers an intimate and unapologetic view into the lives of these particular set of characters and neighborhood in “Two Trains Running.”

Memphis Lee played by (Louis B. Murry) owns the café located in the black community in Pittsburgh during a time when the need for civil rights was heightening, the neighborhood is experiencing gentrification and an uncertain future loomed for many. Murray, portrayed his role as if he was born for the part.  His language, movements and natural stage presence gave the performance its authenticity.  Risa, the sassy waitress, effectively communicates and plays out her complexities of self-afflicted scars on her legs to keep men from approaching her played by (Linae Bullock).

Wolf, the numbers runner brilliantly played by (Mack Lemon) and Holloway the old wise man played by (Tyrell Martin) was entertaining as he takes you through his story telling.   Sterling Johnson, ex-convict recently released from the penitentiary seeking the uninterested Risa’s heart and hand in marriage, performance commanded attention and energized the stage.

The successful savvy businessman and owner of the funeral home, West played by (Timothy Eric Andrews), shines in the spotlight. Hambone, played by (Aaron Hancock) reaches deep as he performs, tapping on your heart with the injustice of having no one to fight his battles for him.

The struggles of the characters at Memphis’s café takes place over 50 years ago, but many of their concerns ring true today. So much has changed since the civil rights movement of the sixties and so little has changed at the same time. Today in most major cities, like Pittsburgh was in 1965 in neighborhoods like Memphis’s café there is gentrification, racial tensions heightened,  voting rights under attack and the uncertainty of an economic future among the middle class and poor. “Two Trains Running” is a “bird’s eye view” into a world often unseen or celebrated.