1. Singin’ in the Rain, Jr. at Children’s Playhouse of Maryland.

“If you’re looking for a family friendly, endearing and well-paced show, then CPM’s ‘Singin’ in the Rain, Jr.’ fits the bill.” – Regina Rose.

Synopsis: The “Greatest Movie Musical of All Time” is faithfully and lovingly adapted by Broadway legends Betty Comden and Adolph Green, from their original award-winning screenplay in Singin’ in the Rain JR. Hilarious situations, snappy dialogue and a hit-parade score of Hollywood standards make Singin’ in the Rain JR. a guaranteed good time for performers and audience members alike. 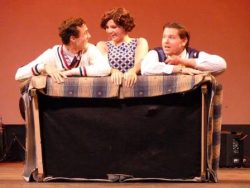 Synopsis: Good fences make good neighbors … right? From the outrageous mind of playwright Karen Zacarías (Destiny of Desire) comes this hot new comedy about the clash of class and culture that pushes well-meaning neighbors over the edge. Tania, a very pregnant Ph.D. candidate, and Pablo, her rising attorney husband, move next door to Virginia and Frank, a deep-rooted D.C. couple with an impeccably trimmed backyard. But when a questionable fence line puts a prize-worthy garden in jeopardy, neighborly rivalry escalates into an all-out border dispute, challenging everyone’s notions of race, privilege and where to draw the line on good taste. 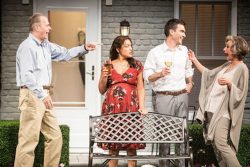 3. The Christians at Baltimore Center Stage.

“Lucas Hnath paired with the direction of Hana Sharif offers us a dual perspective that is nothing short of amazing.” – Alisa L Brock.

Synopsis: Does absolute tolerance require tolerance of the intolerant? Can a divided head find a way to lead? When the stakes are eternity, what happens if your pastor is wrong? These are the questions that arise in a present-day American megachurch in The Christians, a new play about the seemingly insurmountable distance that exists when people of the same religion hold different beliefs. Stunning in its theatricality, this production will feature multiple choirs from area churches. Prescient in its investigation of the commercialization of religion, this play spotlights the sensitive and challenging obstacles of all successful organizations.

“…a comedy-thriller with some unexpected surprises and a few hearty laughs.” – Mark Beachy.

Synopsis: Ingeniously constructed play offers a rare and skillful blending of two priceless theatrical ingredients: gasp-inducing thrills and spontaneous laughter. Dealing with the devious machinations of a writer of thrillers whose recent offerings have been flops, and who is prepared to go to any lengths to improve his fortunes, Deathtrap provides twists and turns and sudden shocks in such abundance that audiences will be held spellbound until the very last moment. 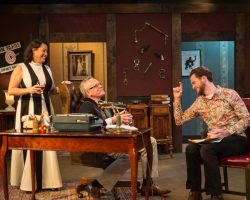 “…packs an emotional punch that can leave you breathless.” – Timoth David Copney.

Synopsis: Francesca Johnson, a beautiful Italian woman who married an American soldier to flee war-ravaged Italy, looks forward to a rare four days alone on her Iowa farm when her family heads to the 1965 State Fair. When ruggedly handsome, National Geographic photographer, Robert Kincaid, pulls into her driveway seeking directions, though, what happens in those four days may very well alter the course of Francesca’s life. 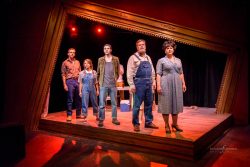