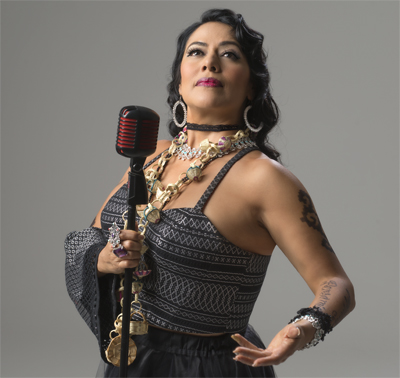 Lila Downs is one of the most prominent Latin American vocal artists. She has a distinctive style and a powerful voice that has earned her a Grammy and four Latin Grammys. She also performed at the 75th Academy Awards. Her charisma goes beyond just being a great performer but also her passion for people.

Downs combines multiple musical styles and during the concert referenced the influences for many of the songs. There were indigenous, Spanish, jazz, pop, Mexican, Cuban and several other styles represented in her set. All of them suiting her strong voice well and allowing her to tell stories of life, love, death, and tradition.

Her charisma goes beyond just being a great performer but also her passion for people.

Most of the music was not in English, but it wasn’t all necessarily in Spanish either. Many of her songs are in indigenous languages. This in no way hampers the story telling for those in the audience unfamiliar with these languages and is a reminder that music truly is universal.

She is an outspoken social justice advocate and spoke openly about immigration and women’s rights. Downs said we should look beyond our differences and allow music to bring us all together. A portion of the evening’s ticket sales went to earthquake relief in Mexico.

Lila Downs knows how take charge of a stage. She dances and sings and flows in and out of genre with ease. Downs keeps an array of accessories and instruments available for her to change her look depending on the mood of the song she is singing. It is a simple yet clever gesture to prepare the audience for what is coming next. She seems to float about the stage and truly appears to be having a ton of fun.

Her band is truly remarkable. All of the men on stage play several instruments and many of them sing along and dance. They too look like they are having almost too much fun. At one point in the concert there was a “dual” between two of the trumpeters and it was a rousing and intense couple of moments as both of the men played with such incredible power and skill. Downs has done well at surrounding herself with performers who match her intensity and play off of her well.

Her energy on stage was electric and it fueled the already eager audience. Audience members were loud but in a loving enthusiastic way. There was dancing in the aisle and people waving the Mexican flag like it was the World Cup. There was a beautiful amount of joy among everyone there and such a fluid give and take between the stage and the audience.

There were also some wonderful projections that matched her music well. They aided in the story telling and mood of each song and some included the English lyrics. Her encore was partnered with some lovely dancers. Their bright flowing skirts and her powerful and quick singing paired with the projections and created a wonderfully vibrant and almost overwhelming sensation for the senses. It was a lot to take in and everyone in the audience was filled with awe.

It is no doubt that Lila Downs is a truly unique performer who has committed using her platform for the well-being of others. She is inspirational and strong and a true joy to see live.

Lila Downs was part of Strathmore’s Windows of the World series of international performances. For tickets and more information click here.