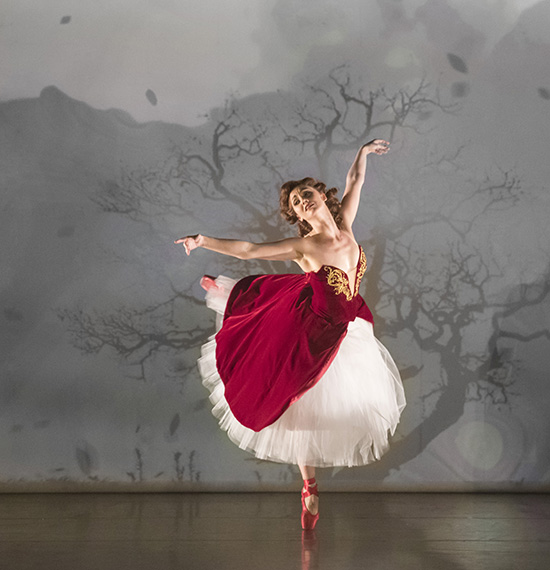 Ashley Shaw in The Red Shoes. Photo by Johan Persson.

The most iconic pair of red shoes may belong to Dorothy Gale in the “Wizard of Oz,” but the titular pair in Mathew Bourne’s new production of “The Red Shoes” takes their heroine on no less turbulent a journey. Based on the 1948 film by Michael Powell and Emeric Pressburger, the new ballet folds that story into an expertly directed, beautifully performed exploration of what it means to suffer for art. Bourne’s production is a feast of gorgeous imagery and inspired dance that is unmissable.

This reinvention takes its plot outline from the film, about a post-World War II dance company, the Ballet Lermontov. Our story opens on the company mid-performance of a delightfully melodramatic ballet, full of passion and pistols. We are soon introduced to the backstage, where we will spend most of our time with the dancers, a space that is dominated by the ballet’s artistic director, Boris Lermontov (Sam Archer). The story’s focus, however, is the new ingénue that joins the company, Victoria Page (Ashley Shaw). Her romance with her art, and with the company’s composer, Julian Craster (Marcelo Gomes), draw the envy of Lermontov.

…a feast of gorgeous imagery and inspired dance that is unmissable.

This all sets a delightful backdrop for some outstanding ballet. Ashley Shaw as Victoria Page is an incredibly dynamic dancer, shifting from classical to modern effortlessly. She is able to communicate her character’s growth from ingénue, to a mature and confident dancer, through her technique and wonderful expressivity. Marcelo Gomes also impresses as Julian Craster, and his agonized, frenzied solo early in the show ably captures the mania of artistic obsession.

Bourne paces the production perfectly, with stunning set pieces interspersed with quiet, narrative sequences. Much of the enjoyment of the first half comes from this peak backstage at the daily life of a ballet company. These busy scenes encourage the eye to wander, as three or four stories unfold onstage simultaneously. Bourne mixes the melodrama with quite a lot of humor, and Liam Mower deserves special mention for his portrayal of the consistently amusing premier danseur of the company.

The standout moment of the show is the “Red Shoes” ballet within a ballet that the company performs, with Victoria as the lead. The stark, modern set and black and white projections, courtesy of Duncan McLean, evokes the iconic surreality of Hitchcock’s “The Birds.” Aesthetics combine perfectly with orchestral music by Bernard Herrmann (arranged by Terry Davies), who was himself a collaborator with Hitchcock as a film composer. Though the arrangements are taken from Hermann’s pre-Hitchcock work, the swelling, distressed strings lend this central performance a sense of panic and unreality familiar from films like “Vertigo.” Her character’s inability to stop dancing, pulled along by her enchanted shoes, foreshadows Victoria’s actual fate, and the dark turn the second half of the show will take as she and Julian try to find artistic and romantic satisfaction outside of the ballet company.

Dorothy may have just wanted to go home, but Victoria’s journey has a much more complex, and moving, destination. Though she suffers to achieve artistic perfection, this production is itself clear evidence of the grand heights that can be reached by artists at their best.

Running Time: About 2 hours with a 20 minute intermission.

Advisory: This production includes mature themes. Recommended for age 8 and up.