Opera Review: ‘Samson and Delilah’ with Virginia Opera at GMU Center for the Arts 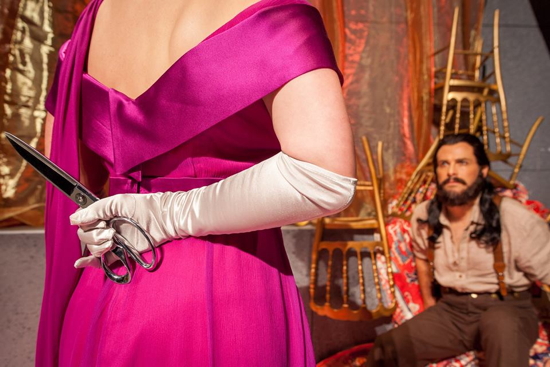 The Virginia Opera presents “Samson and Delilah” with Derek Taylor as Samson.

The Virginia Opera continued their season-opening production Saturday night at the George Mason University Center for the Arts with Camille Saint-Saёns’ biblical, seductive psychodrama, “Samson and Delilah.” Being the company’s first undertaking of this defining opera of the French genre, the well-executed endeavor has born an exciting addition to their repertoire.

The straightforward plot, if not familiar to most audiences, is easily accessible as the whole of the opera centers around the two main characters. After a slow, expository first act in which Samson leads the Hebrews in rebellion and incites Delilah’s vengeance, the pace and drama quicken, climaxing in the iconic “Bacchanale” and Samson’s destruction of the temple.

This production, adapted by director Paul Curran as set in a pre-war, oppressive government regime, can’t quite shake the overt iconic references to 1930s German Nazism. While this narrows a bit the grand scale of the original biblical setting, it still allows the themes and characters to develop uninhibited. The dark and somber set designs by Court Watson, though subdued, are creative and, by generating depth and contrast in the limited amount of space, conquer the limitations of an opera company that transports each show to three varied venues. Costumes, also by Watson, and lighting by Driscoll Otto similarly fall in line with the dim and shadowy theme.

Under the direction of Adam Turner, the musicians of the Virginia Symphony Orchestra contribute a direct and clear reading of Saint-Saёns’ score. Aside from a couple overly-mechanical moments in the first act, the playing is nuanced and exciting. The highlights are their heartfelt accompaniments to Delilah’s arias and the colorfully dynamic “Bacchanale.”

With any work that centers so prominently around the main characters, much of the success rests in the hands of those in the leading roles. As Samson, Derek Taylor (making his role debut) possesses a clear and healthy voice that lends itself well to the demands of the part. He is at best when interacting with his leading counterpart, but many of his solo moments come off as stiff, both visually and vocally with want for more nuance.

Katharine Goeldner seems to be in her wheelhouse as Delilah. Her unforced, but commanding voice is abounding with depth, subtlety, and range. She makes it apparent this is not her character’s first foray into seductive trickery. Her renditions of the main arias, “Printemps qui commence” (“Spring Begins”) and “Mon coeur s’ouvre a ta voix” (“My heart opens itself to your voice”), are heart-stopping and beautiful. She is confident and consistent in quality as a soloist and while interacting with any of the cast.

Notables from the supporting cast include Michael Chioldi as the High Priest of Dagon and Stefan Szkafarowsky’s portrayal of an Old Hebrew. Chioldi is sonorous and strong like a trombone with a commanding presence. Szkafarowsky’s voice is penetrating and his depiction shows sageful concern for Samson.

The chorus is deserving of special recognition for their performance and preparation. Their sound is energetic, present and clear with fine attention to detail. Especially when split into male and female ensembles, a unison conceptualization of tone is apparent and appreciated.

In all, this production is exciting and effective. The inadequacies are minor and do little to stand in the way of a fine performance. The local community should be looking forward to their return to GMU in early December with Puccini’s “The Girl of the Golden West.”

This program will be performed again on the George Mason campus Sunday, October 8th at 3 pm. It will be presented the weekend of October 13 at the Dominion Arts Center in Richmond. For tickets and information about the Virginia Opera, click here. For more performances at George Mason’s Center for the Arts, click here.