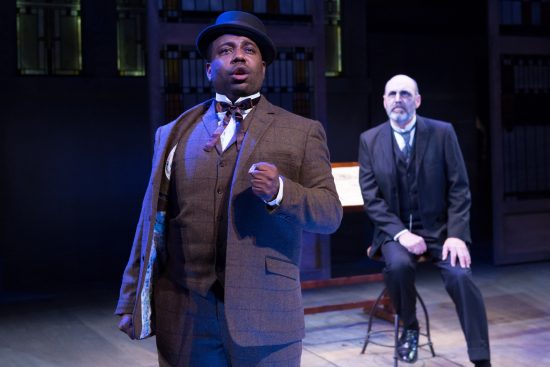 Urban Arias continues strong in their commitment to market opera’s accessibility to the D.C. community through productions of short, contemporary operas. And their season opener “Shining Brow,” a snapshot into the life of Frank Lloyd Wright, does not disappoint.  Revered for his innovative architectural style that blended structures in a seamless, organic way with nature, Frank Lloyd Wright is memorialized as an icon in American architecture. But who was the man behind the building? “Shining Brow” explores the intersection of Wright’s art and personal life through the lens of his most prominent relationships and their eventual eclipse under the shadow of Wright’s towering ego.

…“Shining Brow’s” crowning achievement lies in the complementary nature of its emotionally riveting score and libretto which together encapsulate the exciting future of American opera.

The stage is set by Wright’s long-time mentor, his Lieber Meister, Louis Sullivan, reminiscing of the time Wright was a “Pencil in [his] hand” and how Wright’s obsession with his craft has distanced him from all the people he loves. Struggling to maintain the façade of marriage, Wright and his straight-laced wife Catherine argue over the increasing amount of time Wright devotes to his work. Unbeknownst to Catherine, Wright has developed a secondary obsession: Mameh Chaney, the glamorous, charming wife of one of Wright’s prominent clients Edwin Cheney. Their tumultuous affair prompts Mameh to divorce Edwin for Wright, and the two start a new life together leaving Catherine pitying the woman she knows will experience the same neglect from Wright that ended her own marriage. Wright’s habitual inability to prioritize relationships above architecture eventually trouble Mameh as well and she contemplates if he could ever love her as much as his “Shining Brow.”  One by one, Wright’s relationships collapse under the impossible weight of his ego until he is left with nothing but the solitary sound of his own voice.

Under the expert direction of Grant Preisser, this cast of talented stars triumphs the intellectual depth and genuine poignancy of this historical drama. Sidney Outlaw leads the cast as Frank Lloyd Wright, his magnificent tenor voice transfixing the listener with both its subtlety and warmth of tone. Despite a frequent lack of visual interaction with his fellow cast mates, Outlaw’s final unaccompanied soliloquy allude to his promising talent. Catherine, Frank’s first wife, portrayed by Rebecca Ringle emerges as the unexpected star. The humor and sass she highlights in Catherine’s bitterness towards Wright bring much needed levity to the somber nature of the piece. She also provides an ideal contrast to Miriam Khalil’s Mameh Cheney, who exudes a charming allure to match a voice of equally lush timbre. Khalil’s aria “Even Now I Hear An Echo” stops the show with its stunning melodic moments and sense of genuine desperation. Robert Baker’s vocal presence and clarity as Louis Sullivan is much appreciated as well as Ben Wager’s choice of a sharp physical characterization for Edwin Cheney. Despite Edwin’s disposition as the blundering fool, Wager’s interpretation incites pity for the honest man Mameh spurns.

“Shining Brow”makes use of a minimalist set, only utilizing a set of simple chairs, a drafting table, and exquisitely designed stained glass panels set in a geometric pattern reminiscent of Wright’s own architectural style. Lucrezia Briceno’s lighting design further accentuates the stained glass panels to reflect nuances in mood from scene to scene. Period costuming by Grant Preisser encapsulates the spirit of this industrial age in American history by limiting the colorscape to muted tones that provide a stark contrast to the complex light texture created by the stained-glass.

The most noteworthy aspect of this production is Paul Muldoon’s stunning libretto. His use of early 20th-century verbiage and intricately woven references so numerous they required an index at the end of the program, truly lift the renaissance world of Frank Lloyd Wright off the page and into the hearts of the listener. Due diligence must also be given to the Inscape Chamber Orchestra under the direction of Robert Wood. They effortlessly capture the Americana soundscape, at times evoking a Copland-esque essence in Daron Aric Hagen’s score, transporting the audience directly to Midwestern America in the early 1900s.

While truly stunning in all aspects of its production, “Shining Brow’s” crowning achievement lies in the complementary nature of its emotionally riveting score and libretto which together encapsulate the exciting future of American opera. Urban Arias has set the bar high for its 2017-2018 season, and opera-goers should eagerly await their upcoming performances of “Florida” and “Why is Eartha Kitt Trying to Kill Me?: A Love Story.”

Running Time: 90 minutes with no intermission; an audience talk-back will follow each performance.

Advisory: “Shining Brow” contains mature references, and may not be suitable for young children.