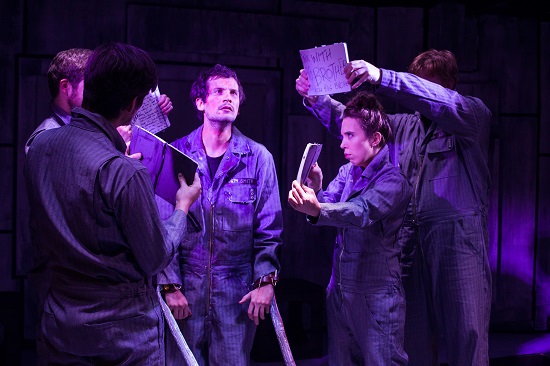 A timely and terrifying adaptation of  George Orwell’s novel “1984” is now on stage at the Maryland Ensemble Theatre in Frederick, Maryland.

Recent events must have inspired adaptations of  “1984” to be produced on stages across the country, including one written by Robert Icke and Duncan Macmillan, which just closed on Broadway, October 8 at the Hudson Theatre, after 38 previews and 125 regular performances.  MET is using an adaptation by Michael Gene Sullivan, which was first produced in 2006 by the Actors’ Gang in Los Angeles.

Michael Gene Sullivan’s script takes a good portion of the first act to generate steam, but once it does, sparks fly in this electrifying take on George Orwell’s classic novel.

Director Julie Herber creates an appropriately dark and futuristic mood and environment for the audience, featuring multiple TV’s and video projections, a creepy and cold interrogation chamber, and a few other surprises that surround the unsuspecting theatregoers.  Remember, Big Brother is watching you.

Scenic design by Wheeler Stone, lighting design by Paul Shillinger, costume design by Stephanie Hyder, properties by Vanessa Stickland, video projections by Daniel Wyland, and sound design by Thom Huenger, all help to carry out the director’s chilling vision for “1984.”

The story is centered around Winston Smith, a cog in the giant machine state of Oceania.  Tethered to wires that electrocute him when his answers don’t match what his questioners want to hear, Winston is forced to confess his “Thoughtcrimes” in an interrogation that he will never forget…or will he?  After all, 2 plus 2 equals 5, right?

I must say that I am quite impressed with actor Matt Lee’s impeccable performance as Winston.  During his 2 hours on stage, Lee gets punched, electrocuted, emotionally tormented, and covered in blood.  Is this role an actor’s dream, or worst nightmare?

As the only female in the cast, Margaret Anne Murphy as the Second Party Member gave a performance that made me sit up and take notice.  Besides the well-executed romantic scenes, Murphy added a sense of schadenfreude as she watched Winston being tortured.

The wonderful cast is rounded off with Tim Seltzer as O’Brien, Daniel Valentin-Morales as First Party Member, J.D. Sivert as Third Party Member, and Steve Custer as Fourth Party Member.

Director Julie Herber sums up the importance of “1984” by saying, “In our climate of alternative facts generated from Washington and some media, we can only hope that by bringing such stories as ‘1984’ to the stage, we can encourage activism on a local (as well as national) level.”

Running Time: 2 hours and 10 minutes with one intermission.

“1984” plays through November 12, 2017 on the Main Stage of the Maryland Ensemble Theatre in the Historic FSK Hotel building— 31 W. Patrick street in downtown historic Frederick, MD. For tickets call the box office at (301) 694-4744 or purchase them online.