Theatre Review: ‘An Act of God’ at Signature Theatre 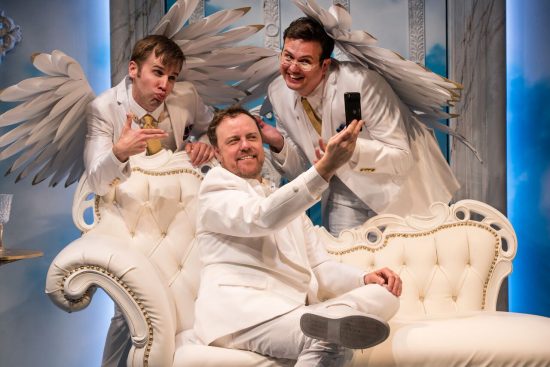 Evan Casey as Michael, Tom Story as God, and Jamie Smithson as Gabriel in ‘An Act of God’ at Signature Theatre. Photo by Margot Schulman.

“Act of God” at Signature Theatre in Arlington, VA, is a much-needed escape from today’s headlines and increasing tensions. God is evidently a born raconteur and he has plenty to say about his creations and how they have muffed up his designs. Inhabiting the mind and body of a local actor (Tom Story–amazing coincidence), God decides to update the 10 Commandments with his trusty henchmen, Gabriel (Jamie Smithson) and Michael (Evan Casey) who prove that archangels can rock a house.

…70 minutes of belly-laugh fun and some very sharp insights at the follies of humanity.

Written by God (he gets full credit in the program) and adapted by David Javerbaum, the show is a tightly-choreographed 70 minutes of belly-laugh fun and some very sharp insights at the follies of humanity. In God’s eye, humanity creates lots of follies and problems. God also takes the time to clear up some misunderstandings in the Bible, his own bestseller. Eleanor Holdridge’s direction is seamless and allows the cast to fully inhabit this zany material.

Tom Story is the ultimate show host as he riffs and roars through the process of explaining to us all what we have gotten so wrong in our interpretation of the Bible. Tom Story is the God that will explain everything to you while he exults in his own divinity and invites you to do the same. He owns that stage.

Evan Casey as Michael proves some serious comic chops as he engages the audience, poses some very uncomfortable questions to the Almighty, and gets his wings singed in retaliation. At one point, as he basically sent into time-out, you could feel the audience go “awww.” He’s the pesky little brother always asking “why?”

Jamie Smithson is the “good archangel,” always ready to carry the 10 Commandments, do a Vanna White with the Bible or just always show God that he is on his side unquestioningly no matter what. He is so cheerful and transparent in his reactions you almost want to pinch his cheeks and give him a cookie.

The set is splendid–all white and celestial blue with a touch of gilding and crystal and over-the-top curlicues, as befitting the Supreme Being.  The sparkling (in many ways) set is designed by Daniel Conway; his vision is the bedrock to this little slice of heaven. The actors are all dressed in white. Both archangels have a touch of color in their pocket squares and socks, and the shoes are so shiny white they could blind you. But only God wears all white. Costume designer Robert Croghan designed the very sharp suits and accessories.

The one caveat about the staging is at the very beginning of the show when the light show introducing God’s entrance blinds the audience in house right and part of the first row. But once the spots clear, you’re caught in God’s spell.

“Act of God” is just pure fun with some decidedly left-handed interpretations of creation events. The “truth” about the Genesis story provides some of the show’s best lines. It is a fast-paced show and the timing shown by all the actors is deft and spot-on.

Advisory: There is some theatrical haze, bright lights, adult language.