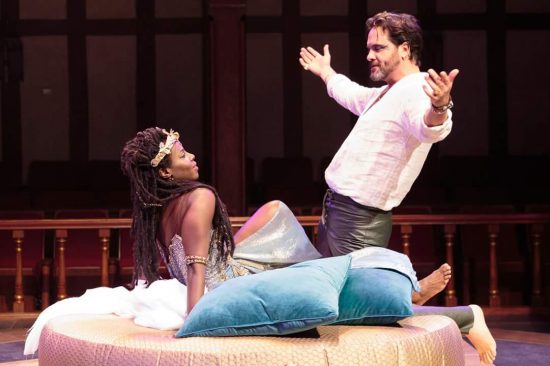 Shirine Babb and Cody Nickell in “Antony and Cleopatra” at the Folger Theatre. Photo by Teresa Wood.

Exquisite as it is electrifying, William Shakespeare’s epic tragedy “Antony and Cleopatra,” seduces from every angle at the Folger Theatre in Washington, DC. Intimate and revealing, this beautiful production brilliantly directed by Robert Richmond delves into the complex and captivating relationship between two larger-than-life public figures, and the consequences their romance has on the establishment of the world order.

Passion abounds. The chemistry between Mark Antony and Cleopatra draws people in like a guilty pleasure…

The in-the-round style of presentation of “Antony and Cleopatra,” along with Richmond’s decision to make the private scenes public and vice versa, allows the audience to become unwitting voyeurs to the thrilling and tender affair. Adding to the sultry ambiance is eye-catching scenic design by Tony Cisek which features a revolving stage with a striking pyramid high above and a Roman shield below. Gorgeous costume design by Mariah Hale depicts the dress of ancient times with elegant and vibrant ensembles for the entire cast, from Cleopatra’s regal embellished looks to the Roman soldiers’ leather regalia.

Passion abounds. The chemistry between Mark Antony played by Cody Nickell and Cleopatra played by Shirine Babb draws people in like a guilty pleasure. All eyes lock on the two as they intensely pursue each other, indifferent to how their actions affect anyone around them including Antony’s fellow triumvirs Octavius Caesar (Dylan Paul) and Lepidus (Robbie Gay), who anxiously await his presence.

As the Queen of Egypt, Babb brings an exciting dynamic to her character, refined as a ruler, yet coquettishly playful, and vulnerable in the arms of her beloved. She loves, she laughs, she commands, looking quite captivating while doing it. Despite her iconic status, she is human after all, and it is refreshing to see a softer, self-aware, doting side as she interacts with Antony as well as loyal attendants Charmian (Simoné Elizabeth Bart), Iras (Nicole King) and Mardian (John Floyd). Meanwhile, Nickell portrays a dashing and handsome Antony, and effortlessly captures the restlessness provoked by his heart’s desire and the mounting power struggles that surround him. In scenes, where he is in the company of other men he appears to be in control, at least on the surface. The brash and conniving portrayal of Caesar by Paul is also hard to ignore, with his domineering demands resonating above the rafters.

A lot is at stake in Alexandria and Rome. There is a testing of alliances as battles and bloodshed ensue, ultimately creating new boundaries, both personal and political for, everyone. For onlookers, it’s hard not to feel emotional or even question where their loyalties lie as they watch all the drama unfold. However, the turn of events provides some closure, a peace offering of sorts–that the love between Antony and Cleopatra is, in fact, timeless and endures for eternity.

“Antony and Cleopatra” runs until November 19, 2017, at the Folger Theatre. For information and tickets to this performance, visit online.