Theatre Review: ‘Are you now, or have you ever been…’ at MetroStage 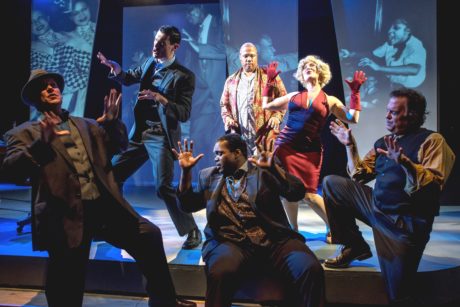 “Are you now, or have you ever been…”, the play currently running at MetroStage in Alexandria is an intriguing, thoughtful, honest slice of history by playwright Carlyle Brown. This is only the second time this play has been produced (the first time was in 2012); for this production, directed by Thomas W. Jones II and with original music by William Knowles, have taken some of Langston Hughes’ poems and set them to music that helps to propel the play through the period portrayed, as well as display an intriguing insight into Hughes’s own creative process.

The play covers Hughes’ receipt of and reaction to a subpoena from the U.S. Senate Permanent Sub-Committee on Investigations on Un-American Activities led by Sen. Joseph McCarthy in 1953. We learn a bit of his story, see the creative process and the frustration that ensues when it is interrupted by real life, and see a man ultimately standing up to the white power of the subcommittee.

The tension grows in the second half when Langston Hughes duels with Roy Cohn, a lawyer for the subcommittee; what we see is a man who is, above all, a writer, not an orator, and who at times seems almost paralyzed at the intersection of art and politics and racial oppression, because these are big questions and can’t be answered with yes or no. But when it counts, Hughes the poet finds the force of his strength and conviction and roars back at the hostile committee. Set at a time in U.S. history when many African-Americans flirted with communism, socialism or some other ism because of the promise of an equality not even paid lip service to in America, this play does not shy away from depicting the racial realities that informed art and politics in everyday life.

As Langston Hughes, Marcus Naylor portrays a very human man. He is a witness to the realities of being black in American in the first half of the twentieth century and bears powerful witness in his writings. And yet he can be petty and snide about another writer. He can be almost tremblingly terrified at the prospect of jail. And he can be the man that refuses to give in to the subcommittee, period. Naylor’s portrayal is layered and physically demanding, and anchors the one-act show, completely inhabiting Langston Hughes.

In the supporting cast, Marni Penning takes on a dual role as a white girl hanging out in Harlem, with “white girls eyes” that “call black boys lips,” and as Roy Cohn, the lawyer interrogating Hughes on behalf of the subcommittee. With her slicked back hair and rapid, strident delivery, she becomes the prosecuting attorney, determined to find a traitor in Langston Hughes; she is almost impeccably polite and vicious and chillingly believable.

In the second half of the show, she and four of the other extremely capable members of the cast (Michael Sharp as Sen. Joseph McCarthy, Russell Sunday as Sen. Everett Dirksen, and Wood Van Meter as David Schine) use moveable podiums as a counterpoint to Hughes’s testimony. What could have been almost a Melissa McCarthy-as-Sean Spicer moment instead became a symbol of the haranguing tactics that the subcommittee and its members used on those who were subpoenaed.

Josh Thomas as Frank Reeves (Hughes’ black attorney) was magnetic, disciplined and at times seemed to move/speak/sing as one. One intriguing subtlety of the show was that the cast periodically sharply rat-a-tatted suitcases/briefcases on the stage; this periodic, completely synchronized thumping began to appear frightening in its conformity and staccato rhythm.

There are two particularly haunting pieces to the staging—the projections onto beautifully shaped scrims and the words of Langston Hughes’ poems set to music are mesmerizing. William Knowles is the music director/composer/keyboardist and his work provides a moving counterpoint to the artistic process and the stultifying atmosphere engendered by the receipt of the subpoena.

MetroStage’s production of “Are you now, or have you ever been…” is an important, mesmerizing show brought to life by a cast who seem born to play these roles and is intelligently and movingly staged.

Running Time: One hour and 45 minutes, with no intermission.