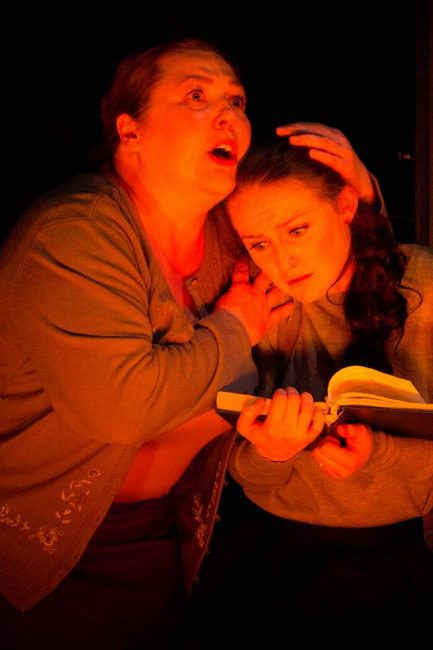 Nicole Halmos as Margaret and Taylor Campbell as Carrie. Photo by Wolford Photography.

Based on Stephen King’s bestselling novel, “Carrie: The Musical” is getting a rustic, raw, and unashamedly haunting production at the Cumberland Theatre, now playing through October 29, 2017.

Just in time for Halloween and National Bullying Prevention Month, “Carrie: The Musical” is about a bullied teenage girl named Carrie who snaps on prom night, but then uses her telekinetic powers to seek redemption.

The play with book by Lawrence B. Cohen opens with Sue Snell being questioned by the police, “Where did you first meet Carrie White?”  “Elementary school,” she answers. “We were in the same grade. I don’t think I said a hundred words to her before this thing even began.”  The police continue to ask questions, and so, Sue Snell begins to tell the tale of the events leading up to the tragic night of May 28.

Carrie is a perennial misfit being bullied by all of her high school classmates.  Chris Hargenson is the cruelest of them all.  As Chris, Aimee Conley gives a no-holds-barred performance as she verbally bites and scratches Carrie, humiliating her at every opportunity.  Her doofus boyfriend, Billy, is played by Adam Marino, who embodies the role as the all brawn and no brains type of bully.  Together, Chris and Billy connive to push Carrie to the edge of insanity.

At first, Sue Snell is no better than the rest of the bullies.  But then, something inside her changes and she begins to have a change of heart,  subsequently living to tell the tale of Carrie.  Sarah Burton gives an intelligent performance as Sue, showing her character’s inner conflict at every twist and turn.

In the title role as Carrie is Taylor Campbell who has enough intensity and buoyancy to jump from portraying a shy outcast to a powerful being who uses telekinetic powers.  Campbell also sings with passion perhaps the most catchy song of the show, most appropriately called, “Carrie.”

Carrie’s overprotective and abusive mother, Margaret is played by Nicole Halmos.  A religious zealot, Margaret brings her daughter down rather than lifting her up.  In a truly outstanding performance, Nicole Halmos brings to the role superb acting skills along with well executed vocals.

Supporting roles include fine performances by Hayden Kline as Sue’s boyfriend Tommy, Heidi Gardner as the gym teacher, and Stephen Gumtz as Mr. Stephens, a teacher.

You can tell that the ensemble really enjoys performing the dances choreographed by Brittany Eberly.  In particular, I enjoyed seeing the men take center stage, performing masculine movements that amplified their characters and the story, and of course the pulsating music.

Set designer Rhett Wolford has created a rustic looking set to take us inside a school gym, classroom, and the White household.  Wolford’s special effects will make you sit up and take notice as he does some terrifically spooky tricks with a statue, chair, windows, and a few other surprises.  Fake blood is used in a few key moments of the play.  The amount of blood used, however, was a bit less than I would have expected from this famously bloody tale.

Musical director and pianist/conductor Daniel Chambers is to be commended for a job well-done. He brings out the best of the singing from the ensemble who are spot-on with their harmonies as well as their articulation of the lyrics by Dean Pichford. As a pianist, Chambers’ skills are outstanding, paying attention to every nuance of the melodious and haunting score by Michael Gore.

Expertly directed by Kimberli Rowley, Cumberland Theatre’s production of  “Carrie: The Musical” forces us to ask ourselves the question, “What does it cost to be kind?”

Running Time: Approximately 2 hours and 8 minutes with one intermission.

“Carrie: The Musical” plays through October 29, 2017 at the Cumberland Theatre in Cumberland, MD.  For more information, visit online.