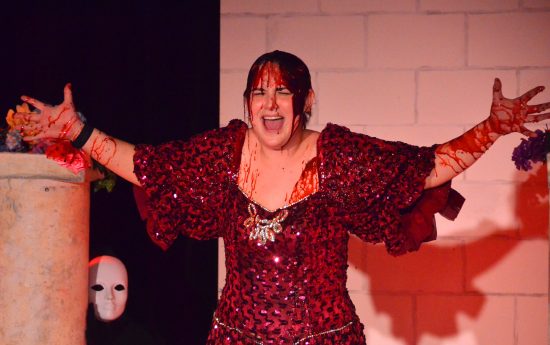 In Chuch Hill Theatre’s first collaborative production with Chesapeake College’s Peake Players, “Carrie: The Musical” with book by Lawrence B. Cohen, music by Michael Gore, and lyrics by Dean Pichford, is about a bullied teenage girl named Carrie who snaps on prom night, but then uses her telekinetic powers to seek redemption.

Directed by Chesapeake College’s Robert Thompson, the cast is primarily comprised of students but also includes a few adult performers.  Everyone in the cast gets to shine as they act, sing, and dance in this relevant musical which forces us to ask ourselves the question, “What does it cost to be kind?”

Carrie is a perennial misfit being bullied by all of her high school classmates.  Chris Hargenson is the most evil of them all.  With her firey red hair and lipstick, Olivia Litteral as Chris is all too believable as the bully who humiliates Carrie at every opportunity.  Her boyfriend, Billy, is played by Brandon Walls who personifies, with great stage presence, the large, intimidating, and loud-mouthed bully. Together, Chris and Billy connive to push Carrie to the edge of insanity.

At first, Sue Snell is no better than the rest of the bullies.  But then, something inside her changes and she begins to have a change of heart,  subsequently living to tell the tale of Carrie. Reilly Claxton as Sue has a good handle on the role, showing her discomfort as she watches others bully Carrie, but conflicted in defending her as to not ostracize herself from the rest of her classmates.

In the title role as Carrie is Shannon Whitaker who nailed every song with her powerful voice and made the audience care about her because of her tender heart.  Maureen Curtin as her mother, Margaret, a religious zealot, was suitably smothering of her daughter, abusing her emotionally and physically.  Maureen Curtin was also strong vocally, reaching beautifully haunting high and low notes.

Other roles include a kind and strong Jacob Wheatley as Sue’s boyfriend Tommy, a compassionate and all together good Samantha Smith as Miss Gardner, the P.E. teacher, and an easygoing James Kaplanges as Mr. Stephens, a teacher who has little control over the classroom and eventually himself.

A few elements in the production could use some more tweaking and support, such as the rustling of body microphones frequently being heard over the speakers, a sparse and unappealing set, and the over-staging of the ensemble, which was, at times, too entertaining and distracting, causing them to upstage and draw focus away from the main action in the scene.

Music director and pianist William Thomas leads the much appreciated live orchestra, which includes Gary Caffrey on guitar, Tom Anthony on bass, and Ray Anthony on drums.  Choreographer Evelyn Paddy does a fine job at highlighting a couple of featured dancers in the musical, as well as creating fun dance moves for the entire cast to enjoy.

Director Robert Thompson sums up the importance of the story by saying, “The true hope of ‘Carrie’ is that by reaching out to the most vulnerable among us with love and compassion, we can dispel the looming shadows threatening to overwhelm and destroy us.”