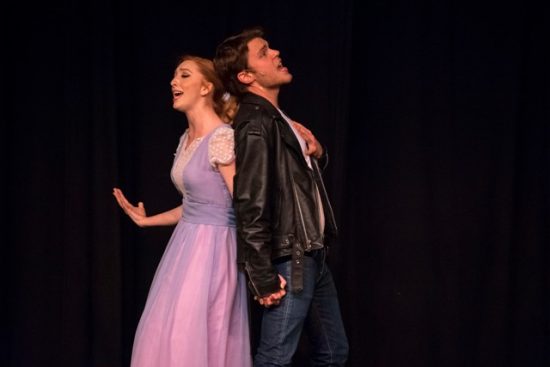 Wouldn’t you like to escape for a couple of hours from the current tumult in the world and head back to the 1950’s when polio shots were mandatory, kissing with tongue seemed like hitting a triple, and air raid drills were routine?

If so, then head to the Slayton House Theater in Columbia to see “Cry-Baby the Musical” presented by Silhouette Stages. Director and Choreographer Tommy Malek and Assistant Director Matt Wetzel guide a terrific group of performers under the musical direction of Nathan C. Scavilla and John Keister in what is an extraordinarily executed, gorgeously costumed production.

With a book by Mark O’Donnell and Thomas Meehan and songs by David Javerbaum and Adam Schlesinger, the musical version of John Waters’ 1990 film of the same name doesn’t contain the vulgarity normally associated with Waters’ past films.  And this particular work, though it received four Tony Award nominations in 2008, didn’t endure on Broadway past the 68th performance.

The hope was that the show could match the theatrical success of “Hairspray” that had been adapted by Mr. Meehan from another famous Waters film. While “Cry-Baby and “Hairspray” deal with class warfare in Baltimore, “Cry-Baby” does not contain the provocative social messaging within the storyline of “Hairspray” (racial segregation) or match its potent score.

Nonetheless, Silhouette Stage’s production of “Cry-Baby the Musical” knocks it out of the park. The prevailing campiness and the quirkiness of the characters that are a hallmark of Waters’ portfolio are evident throughout, and a youthful enthusiastic cast seems to have a great time performing.

You can easily notice the influence of Waters on Javerbaum and Schlesinger’s songs by just the titles, such as “Anti-Polio Picnic,” “Watch Your A*s,” “I’m Infected,” and “Screw Loose.”  Name one other Broadway musical with song titles of this ilk. While I don’t find the melodies in most of the rock, soul and doo-wop numbers particularly memorable, the songs are lyric-driven and are a key contributor to the hilarity of the show.

Rachel Sandler and her four-piece orchestra situated at the back of the stage do an excellent job of supporting the vocals without overwhelming them.  And you can credit Alex Porter for superb sound design allowing every note, every lyric and every spoken word to be heard with great clarity. He and Mr. Malek designed the set, which consists largely of scaffolding and stairs with an assortment of set pieces to denote scene changes.

Costume Manger Clare Kneebone assured that the cast is fitted in spot on period garb including colorful dresses and sweaters for the richer kids as well as leather jackets, tee shirts and jeans for the others.  Specialty costumes for the eccentric characters add to the laughs.

Set in Baltimore in 1958, “Cry-Baby the Musical” pokes fun at the early James Dean and Elvis movies and the rockabilly music that surrounds the plot. The story centers on Allison Vernon-Williams (played charmingly by lovely Lindsey Litka), a never-been-kissed, upscale society girl who would like to cross those proverbial tracks to become a “drape” (delinquent).

She does so when she connects with a drape Wade “Cry-Baby” Walker (Michael Nugent), a cool, good-looking, aspiring rock ‘n roller who is not anywhere as bad as his reputation.  He is orphaned as his parents were wrongfully convicted of a crime and executed.  Be patient; there are loads of laughs to be had.

Allison has to overcome two obstacles: her pious, wealthy protective grandmother, Mrs. Cordelia Vernon-Williams (played superbly by Conni Ross), and her corny, squeaky-clean, square boyfriend, Baldwin Blandish (played sprightly by Matt Sorak).  Allison wants to leave the bland Blandish behind and find a new adventure with Cry Baby.  It’s not that simple though.

As Allison, Ms. Litka demonstrated strong acting skills conveying a wide range of emotions. This ability effectively wins the audience over with everybody rooting for her. Ms. Litka’s pitch perfect singing voice is golden and performed well in such numbers as “”I’m Infected,” and “Nobody Gets Me.”

Michael Nugent as the title character puts on a tour-de-force performance.  Commanding the stage, handsome Mr. Nugent rocks a pair of tight jeans, leather jacket and a tee-shirt like it’s nobody’s business. His acting is strong without going over the top, and he delivers the comedic lines with skill and good timing.

Mr. Nugent is blessed with a solid singing voice and performs extremely well in a duet with Ms. Litka in the clever “I’m Infected” and as a solo in “Do That Again”—one of the few conventional song titles.

In another duet with Ms. Litka, “Girl, Can I Kiss You…?” he tries to introduce French kissing to the innocent girl and the number is totally hilarious with John Waters’ affinity for the outrageous all through it.

There are the eccentric drapes that form Cry Baby’s posse and who encourage Allison to transform her upscale persona to theirs.  Pepper Walker, Cry Baby’s switchblade-toting pregnant 16 year-old sister is played hilariously by Amy E. Haynes.  So pregnant is she, I thought she was about to give birth to a DeSoto.

My favorite character—the one I relate to the most—is Mona “Hatchet-Face” Malnorowski, a disfigured soul who was told when she was younger that she could rob a bank just by using her face!  She proudly brags that she is equally ugly on the inside.  Hatchet-Face is played exceptionally by Parker Bailey Steven.

Another drape is Wanda Woodward played by Clare Kneebone.  It’s not a major role, but she performs well in several group numbers throughout in addition to her duties as the show’s Costume Manager.  The trio score in the funny “A Whole Lot Worse.”

Then there is Lenora Frigid, an odd girl whose engine apparently does not contain all of its spark plugs.  Played superbly by Bailey Wolf, she wants to be a drape and is smitten with Cry Baby.  Her rendition of the hilarious “Screw Loose” is one of the show’s comedic highlights.

Back across the tracks, Conni Ross deliciously plays the role as Allsion’s wealthy, protective, moralistic grandmother, Mrs. Cordelia Vernon-Williams (Allison’s parents, too, are dead), who desperately tries to keep her young granddaughter away from that bad-boy Cry Baby. She excels in the solo “I Did Something Wrong Once” and what she was referring to was a biggie.

Matt Sorak as Baldwin Blandish, the conservative square who plays a key role in a plot twist that will not be revealed.  He is completely campy and fun.

Baldwin is a part of a doo-wop group called The Whiffles, always dressed alike, who hopes to make a record.  The members played by Johnny Dunkerly, Jacob Hale and Jeff Miller do a fine job with their vocals and dancing.  Their numbers “Squeaky Clean” and “This Amazing Offer” hit the mark.

Silhouette Stages’ presentation of “Cry-Baby the Musical” is a lively, well-staged production with a splendid cast and is community theatre at its best.  The show is not here long so hurry up and catch it.  The only tears you will have will be from laughing.

Advisory: “Cry-Baby the Musical” contains adult language and situations and is not recommended for children under 12.