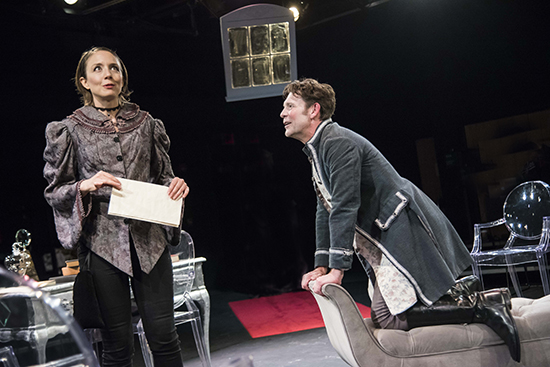 “Well behaved women seldom make history.” This could be the alternate tagline for Lauren Gunderson’s “Emilie: La Marquise Du Châtelet Defends Her Life Tonight” a play that retells the life of a woman who definitely should have made history. That woman is the Marquise du Châtelet, an early 18th-century philosopher and scientist who has been relegated to the margins of history books, until recently. WSC Avant Bard kicks off its season with a splendid area premiere of the brilliant play.

Most plays begin in darkness, but for this story, it’s especially meaningful, given that the main character speaks to us from the beyond. Emilie du Châtelet begins the play, surprised to find herself alive again, and offered the opportunity to reevaluate, and in some ways relive, key moments in her life. And it is quite a life; the play examines her intellectual and romantic pursuits as a member of the French aristocracy during the early 18th century. Unusually educated for a woman, her passion lies with learning, philosophy and scientific exploration.

Her romance and friendship with Voltaire, the famous writer and philosopher, propels much of the plot, but the center of Emilie and Voltaire’s world is intellectual curiosity. The ultimate purpose of Emilie’s exploration, after death, is to understand the meaning of her life. “I’m going to get an answer tonight, even if I die trying – again!” she declares.

…a wonderful mix of energy and entertainment that captivates the mind and heart.

Under Rick Hammerly’s direction, the show is a kinetic mix of modern and classic. The actors embody the stately movement and considered diction of the 18th century, which contrasts nicely with the modern sensibility and humor of Gunderson’s script.

Sara Barker commands respect with her performance as Emilie. She perfectly captures the character’s glowing enthusiasm for discovery as she tears through theorems and ideas at a verbal gallop. Barker plays off of Brit Herring’s charismatic Voltaire; the two magnetic personalities orbit each other emotionally, sometimes physically, like the cosmic bodies they explore together in their long friendship. Herring does a nice job conveying Voltaire’s real value as Emilie’s intellectual peer, as well as his adolescent insecurity about her eventual success. Their exchanges, fighting and flirting, garnered many of show’s laughs.

The compressed cast seamlessly embodies multiple roles each. Billie Krishawn stuns in a particularly powerful scene in which she plays Emilie’s daughter. About to be married off, Krishawn captures the young girl’s deep hurt that her impending future will disallow the kind of personal agency her mother enjoys. Lisa Hodsoll impresses as Emilie’s own prim and small-minded mother, and Steve Lebens expertly transitions between Emilie’s affectionately distant husband, and genuinely impassioned young lover.

It seems appropriate that one of Emilie’s contributions to physics was her argument for force vive, an explanation of the relationship of energy and force that laid the foundations for Einstein’s theories. Played by Barker she is indeed a life force, and a force to be reckoned with. This stylish production is a wonderful mix of energy and entertainment that captivates the mind and heart.

Running Time: About 2 hours with a 10-minute intermission.