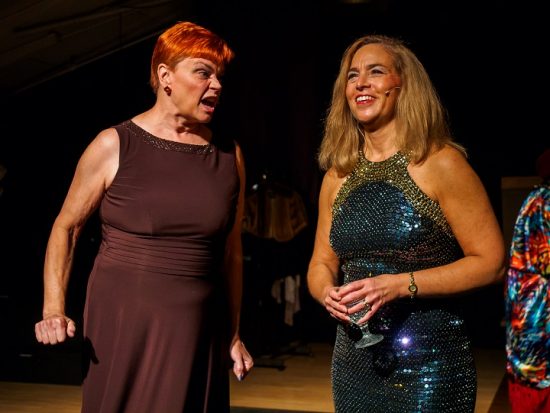 Stepping into the Barney & Bea Recreation Center at Goddard Space Flight Center on Friday, October 27, 2017, was like stepping into an old-time dance hall. I was here to see Stephen Sondheim’s “Follies,” produced by MAD Productions (the Music and Drama Club at NASA Goddard Space Flight Center in Greenbelt, MD.) I was intrigued to see that the main stage was on the floor with the audience and the space was cleverly used to have a few elevated levels, with antiqued wooden steps complete with gold stenciling putting us in the mood for the 1930s and 40s.

… left me feeling pleased with the powerful performances that I had seen.

When the orchestra started the intro, several elaborately decked out showgirls paraded across the stage with huge feathered headdresses reminiscent of Las Vegas. We soon learned that despite the old-time setting, this was a reunion set in the “modern” time of 1971 for former “Weisman girls” who used to dance in the hall. However, our attention was quickly focused on two “girls” in particular, Sally (Cathy Barth) and Phyllis (Jill Goodrich), and their husbands, Buddy (Mike Marshall) and Ben (Shawn Perry).

This foursome clearly had some mysterious history with each other and over the course of the play, we learned just how entangled their lives were as they rehashed and revisited past decisions and romances and considered new ones. Their stories unfolded with the help of their younger selves, played in this evening’s performance with excellence by Julie Rose, Sara Collins, Sean Morton, and Michael Silber.

As their narrative wove in and out of the play, we were treated to several delightful song and dance numbers from the former dance hall performers. The first of these numbers was “Rain on the Roof” performed with charm by Sherry Mitchell and David Solomon. I especially liked the cute rain sound effects they made as part of the song.

A little later in the first act, we were treated to the incredible vocals of Dee Brent as Stella in “Who’s That Woman” and if that wasn’t enough, we also got a fully choreographed tap dance number! I was truly impressed that both the older and younger actors were able to tap in unison and I’m quite sure that few community theaters can boast of such an accomplishment in a dance number.

I was deeply moved by Betsy Edwards as Carlotta in the number “I’m Still Here.” She brought so much weight to her performance as she reflected on all the trials and triumphs that she had lived through and she also was a very engaging performer who actively connected with the audience. In the Second Act, we heard “One More Kiss” performed by Kathy Nieman and Christine Smit. [This song was my personal favorite, but I must disclose that I’m friends with Christine and I’m heavily biased.]

The foursome of protagonists (an “eightsome,” really, when you count their younger counterparts) carried the narrative of the show with aplomb. Despite all of the dance hall numbers, I remained deeply interested in the heated drama of their lives throughout the show. Barth as Sally was incredibly expressive and had a strong voice. Her pathos was heartbreaking by the end of the show. Goodrich as Phyllis portrayed thirty years of bitterness and spite and did a wonderful job bringing out the humorous irony of her role. The scathing glance she gives to Sally at the very end of the show spoke volumes and kept her role rooted in realism despite the many laughs she gets up to that point.

Marshall as Buddy had a strong voice and really unleashed with the choreography in his “Folly” song, “The God-Why-Don’t-You-Love-Me Blues.” Choreographer Katrina Jackson did an excellent job with unique dances that fit the character of each number and I heard many audience members commenting on how much they enjoyed the choreography.

Perry as Ben was despicable in a way that I loved to hate and I enjoyed his solos, shook my head at his messy morals, and pitied him for the absolute cluelessness he brought to his life’s purpose. The younger foursome also shone in their roles and highlighted the difference between their jaded, older counterparts and the hopeful way that they had started out in their youth.

The fantastic costumes designed by director Kim Weaver captured my attention from the beginning of the show. While our protagonists, Sally and Phyllis, were showgirls in the early 1940s before the war, many of the ladies starred in the 20s and 30s and wore fun dresses to the reunion reminiscent of their heydays. Throughout the show, we were treated to a bedazzlement of sparkling costumes from the current Weisman girls as well as in some of the song and dance numbers. I also enjoyed seeing the vintage 1940s outfits on the characters from the past.

First-time director Kim Weaver did an excellent job of bringing together this wonderful production of Stephen Sondheim’s “Follies” at NASA Goddard’s MAD Productions. She balances the heaviness of the storyline with the lightness and humor of the dance hall numbers and left me feeling pleased with the powerful performances that I had seen. I recommend “Follies” at MAD Productions as a wonderful night at the theater.

Running Time: 2 hours and 45 minutes, with one 15-minute intermission