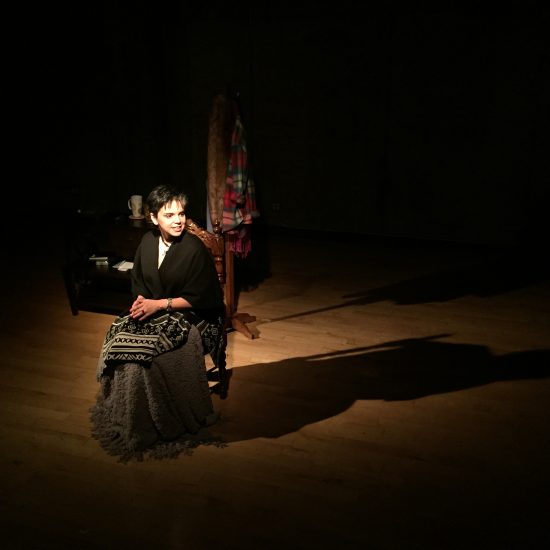 On Saturday, October 28th, 2017 the Edge of the Universe Players 2 presented its production of “Mystery School” by American psychic and award-winning author Paul Selig. A dramedy of sorts, “Mystery School” sheds light on the vastness of spirituality in a lighthearted way that inherently leads audience members toward self-reflection while, concurrently, poking fun at the very thing that is so integral to the lives of billions of humans around the world.

…highly recommended for those who are deeply committed to their spiritual beliefs as well as those who haven’t quite figured out what to believe; there’s certainly enough thought-provoking material for all to enjoy.

In this one-woman show directed by Aly B. Ettman, actress Nora Achrati portrays five very different women who all grapple with their ideology regarding spirituality: What does it mean to be spiritual? What is spirituality? Am I a spiritual being because I know what chakras are? These questions (and more) permeate throughout the production and most, as is the case in real life, remain unanswered. Each woman, in her quest for spirituality, either recalls or is smack dab in the middle of the exact moment that her spirituality (or lack thereof) has come to define an integral moment of her life. There’s the hotel maid who believes that, although she’s been saved, everyone else is destined to burn for eternity in a fiery hell; Francie, the new-age mystic who may or may not have been Attila the Hun in a past life; Amelia, the alcoholic atheist whose ex-girlfriend has found her spirituality and, as a result, was able to overcome her addiction and live a seemingly better life; the woman whose archaeologist husband was tragically killed during an excavation; her only comfort lies in an ancient, pre-Christian African carving of a naked female deity; and there’s Dr. Edie, who was told by a divine voice to become an educator.

All women have strikingly different belief systems and it’s hard to tell whether said belief systems have, indeed, worked in each woman’s favor – and to be completely honest, it doesn’t really matter. It should be known that the success or failure of any belief system is predicated upon how much faith believers have in their individual truths. Each woman profiled (save for one) is deeply committed to her spiritual truth; those truths have come to define their lives in interesting and [sometimes] profound ways.

Nora Achrati did a fabulous job of portraying each character of “Mystery School.” Based out of Washington, DC, Achrati (“uh-SHRA-tee”) is not only an actress but is a writer and voice actress as well. Recent DC credits include “Intelligence,” “The Jungle Book,” and “When We Were Young and Unafraid.” Between monologues, Achrati changed certain pieces of clothing to embody her new character in addition to changing her accent to embody each character introduced. Individual mannerisms and personality traits specific to each character were performed flawlessly and the transition between characters was seamless. A highlight of the evening was her portrayal of the hotel maid (the ultra-conservative, saved Christian who believes she’s somehow better than those around her). Interestingly enough, this light-hearted (albeit severely flawed character) provided some of the most thought-provoking content of the evening.

As these productions do not run themselves, members of the production team include stage manager Clare Shaffer and set designer Dan Remmers. Lighting design was taken care of by Peter Caress and Reid May covered sound design.

“Mystery School” explores a host of themes surrounding spirituality including self-righteousness, loneliness, and atheism (just to name a few) in a way that can appeal to numerous people’s ideologies regarding spirituality. “Mystery School” is highly recommended for those who are deeply committed to their spiritual beliefs as well as those who haven’t quite figured out what to believe; there’s certainly enough thought-provoking material for all to enjoy.

Running Time: Approximately one hour and thirty minutes with no intermission.