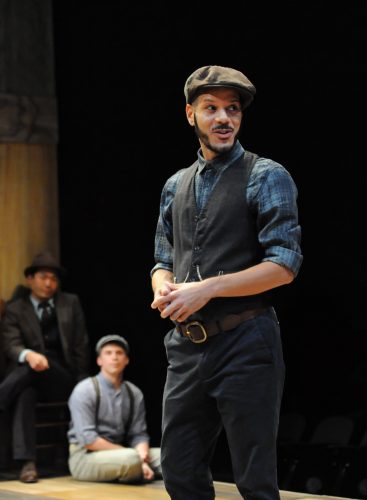 “Do any human beings ever realize life while they live it?—every, every minute?” The famous line from Thornton Wilder’s classic play “Our Town” always seems to hush audiences as it calls us to confront our own shortcomings. The traverse theatre setup of the Olney Theatre Center blackbox added to the show’s poignancy, while the Americana music prelude invoked a kind of nostalgia that I couldn’t quite place. The second production of Olney Theatre Center’s 80th season had begun. As dramaturg Timothy Huth puts it, “This ‘Our Town’ encourages you to be in dialogue with each other, with the cast, and with yourself.”

“Our Town” traces the lives of the people in the small fictional town of Grover’s Corners, New Hampshire at the dawn of the 20th century. Although all the townspeople play a role in the story, the focus of the three-act show is on the intertwined lives of Emily Webb (Cindy De La Cruz) and George Gibbs (William Vaughan). Known for breaking the “4th wall,” “Our Town” features a Stage Manager (Jon Hudson Odom) who narrates the show and develops the audience relationship with Grover’s Corners. Instead of the strong build, powerful plot points, and climax found in many plays, Wilder’s “Our Town” meanders slowly, but meaningfully through life’s smaller moments. An algebra problem. Choir practice. A strawberry phosphate. A twelfth birthday. Moments that may seem insignificant to others, take on monumental importance in one’s own life.

The artistry of the Olney Theatre Center cast and production team in combination with the melancholy beauty of Wilder’s play make “Our Town” easily one of the best shows I’ve seen this fall.

As is characteristic in “Our Town,” the set was minimalist, though this production allowed for two plywood houses in place of the two ladders that were the main scenery when the show was first performed on Broadway. Still, Misha Kachman designed a beautiful set, connecting the two plywood houses with a thin, trapezoidal stage. While the bareness of the stage sometimes led the actors to walk through a “table” they had previously mimed, for the most part the illusion held. Above center stage hung various wooden circles that reflected the light from the sunrises and sunsets designed by Thom Weaver. All of this was complimented by Sarah O’Halloran’s sound design, which used percussions and other items to fill the bare stage with the audience’s imagination. For example, as Mrs. Gibbs (Megan Anderson) and Mrs. Webb (Andrea Harris Smith) mimed feeding chickens, other actors pulled strings through plastic cups, and the theatre was filled with the sound of clucking.

Despite the minimal set and props, Olney Theatre Company’s “Our Town” immediately pulls the audience into the world of Grover’s Corners. Within moments, the Stage Manager is calling on audience members who have questions about the town. Though the questions were planted, a young audience member in front of me stretched her arm as high as she could while waving her hand, desperate to get to know this new town in which she found herself. Later, as the Stage Manager asks the audience to remember when they were young, she grins at her dad. When the audience is asked to think back to their first loves, the little girl covers her face. The intimacy with which the audience is invited to partake in the lives of the townspeople almost feels like spying on them; much like the little girl, I’m transfixed.

Much of that transfixion was thanks to the stellar acting of the seven-person cast. Though “Our Town” normally consists of numerous secondary characters, the Olney Theatre Center production replaced these characters with puppets designed by Aaron Cromie. In addition to their own characters, each of the seven actors played at least one other character in puppet form. Two actors worked the puppets, while one of the two voiced the character, taking on a completely different persona. And although Odom and Anderson added accents to their puppets, they never let their accents slip, no matter how quickly they changed between characters. At one point, Odom voiced at least four characters in a row in addition to the Stage Manager. However, he is so talented that, though he was talking to “himself” for about three minutes, the conversation between all his characters flowed naturally.

Although he started off speaking too quickly, Odom landed his lines well and quickly found the right pace. Within the first few minutes, it was clear that he was one of the standouts. Another standout was De La Cruz as Emily. De La Cruz nailed the earnestness of her character, bringing Emily’s genuine realizations to life in a way that’s crucial for “Our Town” to hit its mark. De La Cruz and Vaughan fit well, embracing both the awkwardness of a budding teen romance and the immensity of their characters beginning a life together. Anderson too was impressive in the calm strength she gave her character. However, even focusing on those four actors, I want to also acknowledge the talent of Smith, Tod Scofield as Mr. Webb, and Tony Nam as Mr. Gibbs. Each character was essential to the powerful play, and the actors invested fully in each one.

As the play draws to a close, its reflections on life’s fleetingness rise to the surface. All around me tissues were being pulled out of pockets and handbags, and it seemed there were few dry eyes left in the theatre. The Stage Manager and other characters reflect on the idea that, as the saying goes, life is often wasted on the living. Below the scripted lines crept the barely muffled sobs of the little girl in front of me. As the play ends and the last of the actors’ lines sink into silence, the audience is left to ponder their own lives and the time they have with the people they love. The artistry of the Olney Theatre Center cast and production team in combination with the melancholy beauty of Wilder’s play make “Our Town” easily one of the best shows I’ve seen this fall.