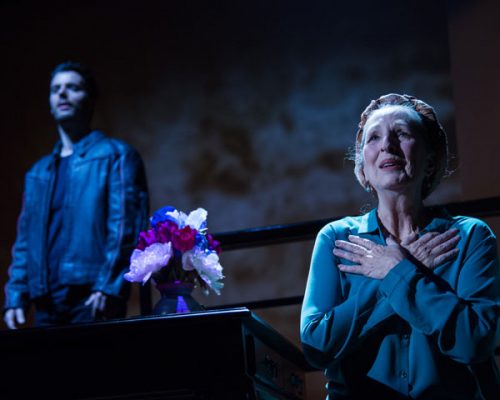 In 1939, the S.S. St. Louis fled Nazi Germany with nearly 1,000 Jewish refugees on board, headed for Havana, Cuba. When the ship arrived in Cuba, however, only a few passengers were allowed to disembark. The ship attempted to then go to Miami, but was turned away, and sent back to Europe — sending many of its passengers right into the clutches of the Holocaust.

This tragedy serves as a backdrop to the story of Pulitzer prize winner Nilo Cruz’s “Sotto Voce,” now playing at Theater J. Bernadette Kahn (Brigid Cleary), is a German writer who has lived the life of a recluse in her New York City apartment for many years, haunted by the fate of her Jewish lover, Ariel Strauss, a St. Louis passenger who perished with his sister in the Holocaust. Her sole company is her effervescent housekeeper Lucila (Desiree Marie Velez), a Colombian immigrant who dabbles in international cuisine. Kahn’s life changes irrevocably when a Cuban student, Saquiel (Andrés C. Talero) calls her, requesting information on Ariel Strauss.

What ensues is a poignant, often fascinating treatise on the existence of memory, love and distance. Saquiel’s dogged pursuit of Kahn and their flirtatious, often passionate exchanges via phone and email have the cadence of an epistolary novel, but the tenor of a great love affair — they never meet in person, opting instead, due to Kahn’s agoraphobia, to go on virtual adventures aided only by their voices and imagination. And in person, Saquiel and Lucila fall in love, bonded by their lust for life and their uncertain status in America.

What could serve as a depressing, didactic political treatise is instead given a human face — three of them, each distinct and fascinating.

Saquiel even pressures Kahn to write about her past, about Ariel Strauss — to which she initially responds by saying that “becoming literature can never redeem what happened to Ariel Strauss and his sister Nina.” Forced to face the reality that her lover was sent to the death camps (some 250 St. Louis passengers perished in the Holocaust), she talks about taking his identity into herself, and the stark and unsettling reality of living in Nazi Germany as a woman embracing the embodiment of her Jewish love — including a dangerous encounter with a young Nazi officer.

Even shadowed as it is by the horrors of the Holocaust, the play also reflects more contemporary struggles — when Saquiel returns to Cuba, he is not permitted to leave, being prevented both by his own government and by the U.S. government, because he initially overstayed his student visa. Lucila cannot visit him, terrified that if she leaves the United States she will not be allowed to return, and be forced to go back to Cartagena. This second act dilemma ends abruptly when Kahn, the only one who can, at least legally, move freely, determines to seek out Saquiel in Cuba herself — despite the two never having met face-to-face.

While one might expect that a play dealing with such heavy material would be emotionally fraught — and it is, in parts — there are also fantastic moments of levity, aided by Velez’s excellent sense of comedic timing and Talero’s flirtatious earnestness. Cleary periodically serves as the straight man, delivering admonishments in an impeccable German accent. She seems, frequently, a woman buffeted by circumstances beyond her control, but does a fantastic job of conveying strength, poise, and vulnerability.

The set is relatively simple, a fairly modernist apartment with a chair and a table. The back wall is a video screen, typically tuned to an artistic rendition of Central Park, changing occasionally to visions of the New York nightlife and, during flashbacks, to the sea. The screen becomes a window into Bernadette’s imagination and memory, the simplicity of the apartment serving to underscore the wonder when she is able to leave it in her mind.

Director José Carrasquillo has put together a production that is fundamentally dynamic — at times light or heavy, but unfailingly heartfelt. What could serve as a depressing, didactic political treatise is instead given a human face — three of them, each distinct and fascinating.

“Sotto Voce” opens Theater J’s 2017-2018 season amid fierce immigration debates and a resurgence of American anti-Semitism. Theater J’s mission statement says it “celebrates, explores and struggles with the complexities and nuances of both the Jewish experience and the universal human condition,” and this play is no exception, exploring as it does how we as human beings deal with our pasts and how those pasts color our futures and our presents.