Theatre Review: ‘The Adventures of Peter Pan’ at Synetic Theater 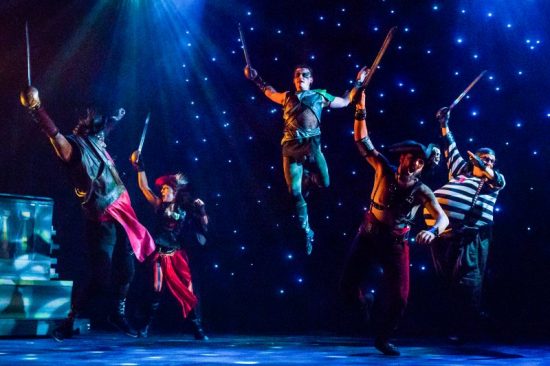 The cast of “The Adventures of Peter Pan.” Photo by Johnny Shryock and Brittany Diliberto.

Flying fairies. Ruthless pirates. Beautiful mermaids. The world of Peter Pan is filled with magic, adventure and fun. And that’s exactly what the cast of Synetic Theater’s “The Adventures of Peter Pan” brought to life in their new production.

Directed by Paata Tsikurishvili, “The Adventures of Peter Pan,” is the classic story of the boy who never wants to grows up. One night, Peter Pan (Alex Mills) travels to London where he meets Wendy (Kathy Gordon), John (Thomas Beheler) and Michael (Scott Whalen), three young children, and whisks them off to the whimsical Neverland. There, along with a group of Peter’s friends called the Lost Boys, and Peter’s fairy sister Tinker Bell (Ana Tsikurishvili), they battle Peter’s nemesis Captain Hook (Ryan Sellers) and his gang of pirates.

Synetic Theater’s production of “The Adventures of Peter Pan,” isn’t exactly the same as the classic version we all know and love. They’ve added in a few twists to make it their own, which makes this a unique viewing experience for both of those who know the original story and those who don’t.

In this production, Tinker Bell is Peter’s sister, which gives them a closer and more personal bond. As Tinker Bell, Tsikurishvili shines, both literally and figuratively. Her entire performance is made up of physical movements, gestures and facial expressions. She speaks no lines throughout the show. Despite her lack of dialogue, she is one of the stars of the show and plays Tinker Bell perfectly.

Another unique element of the show is the prominence of Peter’s shadow, played by Zana Gankhuyag. He is a central part of Peter’s world and accompanies Peter in every scene. But what makes this unique is Peter’s relationship with his shadow. They are portrayed as brothers and companions. Peter cares for his shadow, and whatever Peter feels, his shadow feels too.

As the shadow, Gankhuyag gets the opportunity to show off his impressive dance and body movement skills. His physicality is a highlight of the show whether he is dancing with the rest of the cast onstage, fighting the pirates or even just copying Peter’s moves. In each scene he is in, his strength and elegance stand out.

With minimal effects and simple staging, much of the magic of Peter Pan is left to the imagination – with the help of the talented cast and crew.

Mills as Peter Pan also stands out in his own right. As the lead, he brings a formidability and centralizing power to the show. He is a powerful force and carries the weight of the show with ease. Mills doesn’t allow Peter’s arrogance and selfishness to overpower his character. Instead, he emphasizes Peter’s eagerness and playfulness allowing the audience to sympathize with him and see why he is a leader in Neverland.

With minimal effects and simple staging, much of the magic of Peter Pan is left to the imagination – with the help of the talented cast and crew. Choreographer Irina Tsikurishvili makes much of Neverland and the characters within it come to life through movement. One example of this is Tinker Bell’s hummingbird-like movements, along with some clever lighting, which serves to depict her as flying.

One of my favorite scenes came in the middle as Peter and The Lost Boys welcome the Darling children to Neverland with a party. What ensues is a giant dance party that had the entire audience entertained and clapping along. The movements were fun, purposeful and expertly choreographed.

The fighting was also choreographed extremely well, this time done by Vato Tsikurishvili. The sword fights weren’t just clapping sticks together. Instead, the actors used the entire stage and moved with grace and ease.

The choreography was also responsible for much of the comedy in the show. The fights with Captain Hook and his crew weren’t taken too seriously. Instead, there were several gags that had me chuckling.

Sellers as Captain Hook shined as the comedic relief of the play. His pompousness and bravado were just over the top enough. But he also balanced his role as the villain of the story. He was equally frightening and funny and knew how to keep both in check.

The set was simple with two pieces doubling as Captain Hook’s ship and Peter Pan’s home on Marooner’s island. The rest of the staging was done with a few props and the acting. One scene with mermaids was made possible with just one blue sheet, rippled back and forth by stagehands. A simple, but very effective maneuver.

“The Adventures of Peter Pan” is an exciting and fun show that is recommended for children ages seven and up. With a talented cast, beautiful choreography and a new take on the classic story, this production is one that shouldn’t be missed.

“The Adventures of Peter Pan” runs through November 19 at Synetic Theater in Arlington, VA. For tickets and information, click here.